Boris Michel, ICRC regional director, speaking at a panel at the Raisina Dialogue held in Delhi on 17-19 January 2016. ©ICRC

Boris Michel, the regional director for Asia-Pacific at the ICRC, was in New Delhi on a three-day visit during which he spoke at the Raisina Dialogue, held official meetings, and interacted with journalists.

At the Raisina Dialogue — organised by the Observer Research Foundation and the Ministry of External Affairs, Government of India — Michel’s presentation focused on a wide range of challenges being faced with respect to state and non-state actors during armed conflict and other situations of violence. He underlined that greater respect for both international law and impartial humanitarian action is in the primary interest of all parties involved in any conflict across the globe.

In an interaction with journalists at the Foreign Correspondents’ Club (FCC) of South Asia, Michel shared vital concerns about the changing humanitarian landscape. He said cooperation between the media and humanitarian organisations is crucial as both are at the frontlines of the same violence. He also affirmed the increasing need for active humanitarian diplomacy today and added that the ICRC, a constantly evolving organisation, is engaging with significant global powers with respect to humanitarian crises.

Below are snapshots from the interaction with journalists at the FCC (©ICRC, Ashish Bhatia): 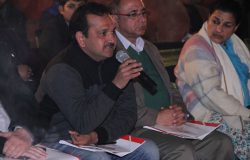 Delhi-based journalist makes a point during the interaction. 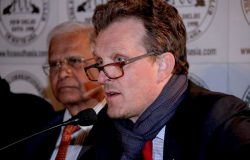 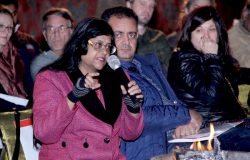 Political analyst Sandhya Jain of The Pioneer poses a question.

Michel also highlighted the need to inject new ideas and new solutions for making useful interventions. Some of these are reflected in this report carried by The Economic Times.

During his visit, Michel also gave an interview to The Wire.in in which he spoke about the situation in Syria, the challenges in the Asia-Pacific region, how social media is affecting and impacting delivery of humanitarian assistance, and the ICRC’s response to the crisis in Myanmar, among other pertinent issues.

Catch a glimpse of this conversation below.

The full interview is available here: “Humanitarian Action Must be Independent of Politics”.