Geneva – The International Committee of the Red Cross has unveiled major new guidance on the implementation of the Geneva Conventions, bolstering arguments that despite violations, the laws governing armed conflict remain relevant, crucial to saving lives and must not be abandoned.

The ICRC’s Director of International Law and Policy, Helen Durham, said that while it was “becoming fashionable to talk about the erosion of International Humanitarian Law” of which the Conventions form the core, the new publication, known as the commentaries, “show that this is a living body of law, which, far from being eroded, is playing a vital role.”

“Even amid the conflict in Syria, where we have seen large scale violations of International Humanitarian Law, those instances where we are able to gain access across front lines delivering medical care and relief supplies to the millions of people trapped in the fighting show that the law of armed conflict is still crucially important in saving lives.” 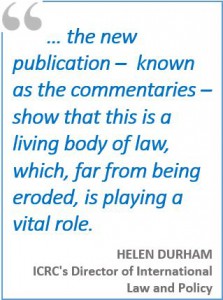 The new commentaries draw on the last 60 years of scholarship and interpretation of these treaties to reflect the contemporary legal reality. “They are meant to be a practical tool for military and government lawyers and courts and can assist those who will need to apply the Conventions in the future,” explains Jean-Marie Henckaerts, who heads the commentaries project.

The ICRC strongly believes that coherent interpretation of the law enhances respect for it. The updated commentaries provide concrete guidance on such issues as the obligation to treat the wounded and sick, and they devote considerable attention to non-international conflicts which form the bulk of today’s wars. The prohibition on sexual violence and the principle of non-refoulement, i.e. the prohibition on sending people back to countries where their lives might be endangered, are also clarified in the commentaries.

The Geneva Conventions are being more studied, more discussed and dissected than ever before and these commentaries will be an important part of the discourse, Dr. Durham said.

“Yes, there is a big gap between the law on paper and its implementation, but that can never be an argument for saying the Conventions are no longer relevant despite the key role they are fulfilling. The Geneva Conventions are not just some historical documents born of another time, they are of burning relevance and importance today – and we need to ensure that their enormous humanitarian potential is recognized and acted upon by all.”

Updated commentaries in 2016 on the First Geneva Convention