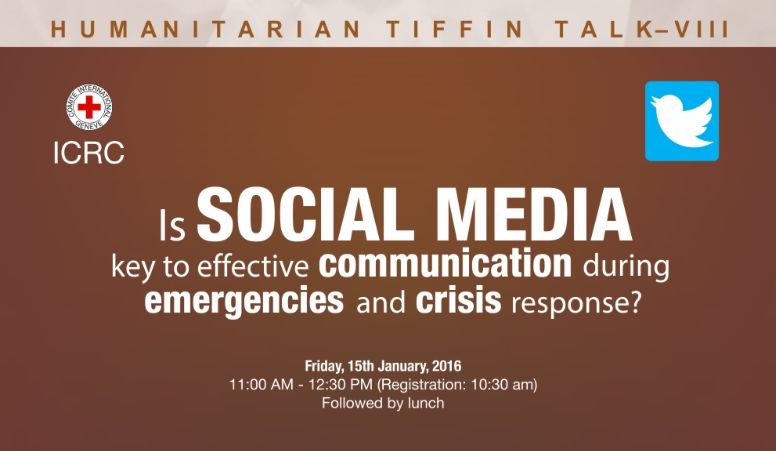 The 8th edition of the Humanitarian Tiffin Talk on the theme “Is Social Media key to Effective Communication during Emergency and Crisis Response” will be held on 15 January 2016 at the ICRC New Delhi delegation. The first Tiffin Talk of this year is being organised together with Twitter India.

The panel discussion will be chaired by Siddharth Varadarajan, who is a Founding Editor of The Wire.  He has earlier been the Editor of The Hindu and is a recipient of the Ramnath Goenka Award for Journalist of the Year. He has taught Economics at New York University and Journalism at the University of California, Berkeley, besides working at the Times of India and the Centre for Public Affairs and Critical Theory, Shiv Nadar University.

The speakers for the day will be Mahima Kaul, Public Policy lead for Twitter India, and Anastasia Isyuk, Deputy Head of Public Relations for the ICRC.

Mahima’s role at Twitter India includes managing the #TwitterForGood program in India. Previously she headed the Cyber and Media Initiative at the Observer Research Foundation, New Delhi. In that role she ran India’s biggest internet policy platform: Cyfy: The India Conference on Cyber Security and Cyber Governance. She contributed regularly to Index on Censorship, a UK magazine, on issues of internet freedom in India. She was selected the International Visitors Leadership Programme on Cyber Security and Internet Governance by the US State Department in 2014. She was also a panelist at the Stockholm Internet Forum, 2014.

Anastasia is based in Geneva and has more than 13 years of experience in the organisation. She has substantial experience in media relations and crisis management. Prior to her current post, Anastasia has worked for several years in Asia, as a communication coordinator in Pakistan and the Philippines. Before joining the ICRC, Anastasia worked for the Financial Times in Dublin and as a freelance journalist in Russia. She holds a bachelor’s degree in Linguistics and a master’s in European integration. 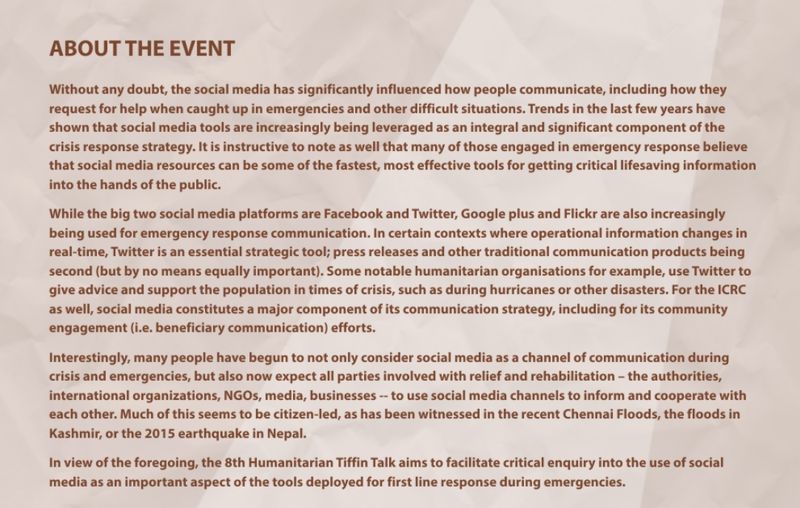 More in the Tiffin Talk series: