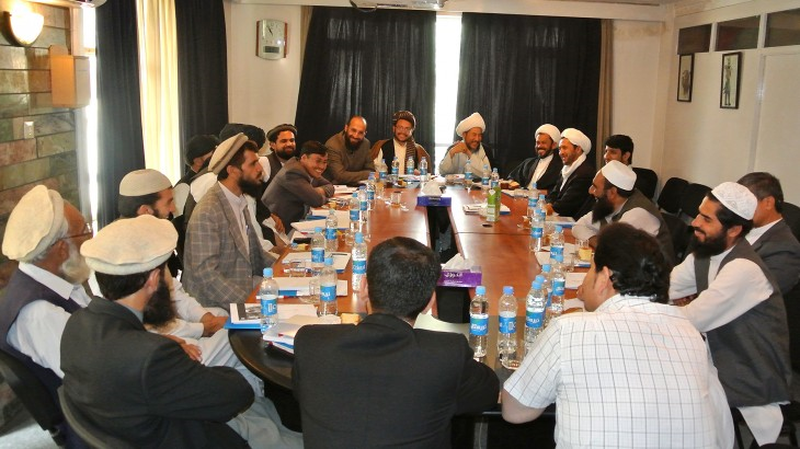 Round table discussion on Islam and international humanitarian law organised by the ICRC, involving Islamic religious leaders, scholars from madarassas, Islamic organisations and government ministries in Kabul, Afghanistan, in 2013. ©ICRC

Should the ICRC be talking to religious circles and, if so, how can the organization do it without compromising its neutral humanitarian mission? From Iraq to the Vatican, from Mexico to Jerusalem, from the Central African Republic to Bangladesh, the ICRC is engaging with religious leaders and faith-based organisations. The ICRC adviser for global affairs, Ronald Ofteringer, explains why it is essential to further enforce protection and respect for people and communities affected by conflict and violence.

During the past two decades, the ICRC has significantly reinforced its dialogue with faith-based organisations and religious leaders. What do you expect from such interaction?

The preservation of human dignity and the protection of human beings in times of armed conflict have strong foundations in precepts of the major world religions, if not all religions. Dialogue between humanitarian organisations and religious leaders can build solid common ground and can pass powerful messages to communities, arms carriers and decision-makers. It can help in the protection of human lives and the limitation of the use of force.

At the global level, religious figures have a central role to play in reinforcing respect for humanitarian values and for the protection of civilians, including women and children, in war situations. At national and community levels, responsible religious leaders provide guidance to their communities and, in situations of turmoil and violence, they can help hold communities together.

Faith-based organisations and grassroots’ initiatives often play a key role in providing first and immediate humanitarian services. They are important partners for national and international humanitarian organisations and help them understand situations and local sensitivities. They can also help in designing meaningful programs that answer the needs of the people affected, as well as contribute to explaining the work and mission of neutral, impartial and independent institutions like the ICRC and help provide safe access for such institutions.

Religious leaders are sometimes responsible for igniting tensions. How can the ICRC cooperate with them?

In situations of violence, during armed conflict, religion and religion-based ideologies can play out in a very positive way in terms of limiting the excesses of war, establishing dialogue, and reconciling communities and belligerents. In the Central African Republic, to mention only one example, both the Grand Imam and the Archbishop of Bangui raised their voices to reconcile warring factions and divided communities and to limit violence.

During the past two decades, the world has witnessed a revival of religiosity that has been accompanied by a kind of “de-regulation” and the gradual replacement of spirituality by surface appearances and symbolism and the emergence of self-declared leaders. With the widespread use of modern means of communication, such voices – too often marked by intolerance, confessional and inter-religious tensions – have unfortunately grown, and have contributed to inter-religious and inter-communal tensions.

In these situations, inclusive dialogue and trust-building are indispensable. In many contexts, this has proven to be effective in ensuring a better respect for humanitarian values and principles, and therefore in alleviating the suffering of people and communities affected by conflict or violence. Dialogue and the building of trust, can contribute to limiting further polarization, and, where possible, to reduce the numbers of victims.

Engaging with all such groups or individuals is one of the main strengths of the ICRC: it is crucial to understand how the institution works and what its role and mandate are. This, in turn, enables the ICRC to carry out its humanitarian activities.

How do you reconcile religious precepts with the ICRC mandate as a neutral, impartial and independent organisation?

The respect for religious beliefs and the rights of prisoners of war to practice their religion are enshrined in the principle of humanity and in international humanitarian law (IHL).

The ICRC’s humanitarian action does not preclude, in any way, dialogue and exchanges with religious leaders and faith-based organisations and communities. This is actually true of any group or individual with whom the ICRC is in contact in order to strengthen the protection of human dignity and respect for the law. The ICRC is also working with, for example, political entities, without this affecting its neutrality, impartiality or independence.

People affected by conflict and violence are the primary concern of the ICRC. The institution will look at strengthening dialogue and interaction with whoever is in a position to impact positively on their fate. In its relations with religious circles – as with political entities, ethnic communities and other actors – the ICRC maintains its non-religious identity, and abstains from engaging in controversies on religious and political matters.

Most activities and contacts have so far been developed with Islamic circles. Why is that?

The ICRC has engaged substantially with Muslim scholars and Islamic circles in different parts of the Muslim world on the commonalities and differences between international humanitarian law and its equivalent in Islamic jurisprudence, as well as on concrete humanitarian issues such as access to victims and the protection of health workers, medical facilities and the wounded and the sick. It has, notably, a long-standing academic dialogue with Muslim scholars in Iran. It has also taken part in conferences and round-tables on Sharia and IHL in Pakistan, Africa and across the Middle East.

The ICRC has always looked to establish trustful and transparent relationships with key stakeholders in the member countries of the Organisation of Islamic Cooperation, not least due to the fact that the needs of victims of conflicts in the Muslim World have sadly increased over the past two decades. In the mid-1990’s, the institution started to consult more systematically with Muslim scholars, intellectuals and humanitarians, as a complement to its usual cooperation with governmental and civil society bodies. The aim of it was – and still is – to overcome misperceptions on both sides and improve the protection of human dignity during armed conflict, by means of discussing the legal, doctrinal and ethical foundations of humanitarian rules as well as concrete challenges in contemporary conflicts, and ways to address them.

What about the ICRC’s relationship with other religious leaders and organisations?

The ICRC has a longstanding practice and strong interest in dialogue and interaction with religious institutions, movements and communities. This encompasses all religions. In March 2014, the ICRC president, Peter Maurer, met Pope Francis. They discussed a whole range of humanitarian issues including: how to better protect human dignity, reinforcing respect for healthcare facilities and personnel, the fate of prisoners and the rights of migrants.

The ICRC also has a regular dialogue with Jewish faith organizations and communities, in particular in Israel and the Occupied Territories. In Mexico and Central America, as elsewhere around the world, the ICRC is engaged with faith-based and religious grass-roots institutions: joint efforts help mitigate the sometimes dramatic consequences migrants are facing on their long journey away from home. We could also mention Islamic charity and relief organisations who play a considerable role in the humanitarian response to the Syrian refugee crisis in Lebanon, Jordan, Iraq and Turkey.

In many countries, the ICRC has developed or is in the process of developing contacts with relevant religious actors that have an impact in conflicts and situations of violence, including Buddhist groups and associations in Asia, and Evangelist and Pentecostal churches in some African countries. The primary reasons behind developing such dialogue and activities are to reinforce mutual understanding, overcoming misperceptions on both sides, strengthen respect for human dignity, preserve human life, increase the protection of those who are not taking part in armed conflict or violence and prevent suffering.