Urgent action needs to be taken to save hundreds of thousands of people in South Sudan from starvation. It is estimated that more than a hundred thousand people have been forced to leave their homes during the past four weeks because of an upsurge in violence. This comes on top of around two million people who have already been forced to flee their homes during the past eighteen months since the crisis began. 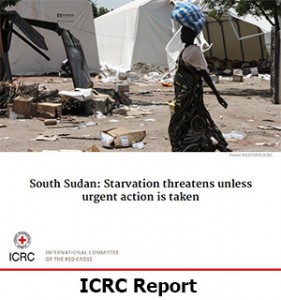 The ICRC has been providing substantial support to local communities. This has included the provision of food rations, seed and tools to farmers; livestock vaccination campaigns; as well as medical and surgical care to communities affected by the recent fighting.

But substantial more effort is needed.

Donate to help the people of South Sudan

Urgent need for food and water: