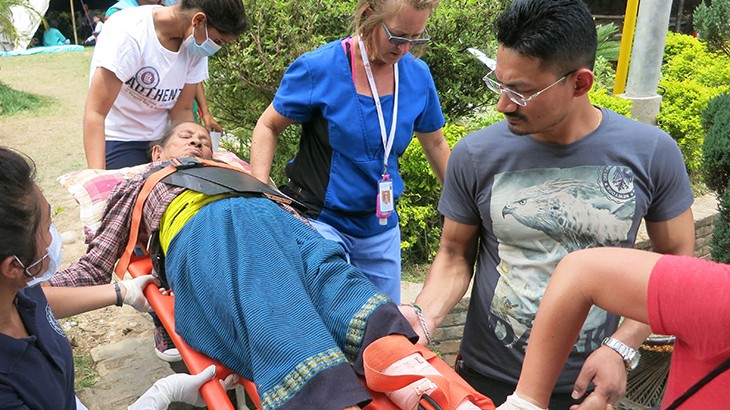 The earthquake and the ensuing health crises seem to have brought out the best among the city's public health professionals. @ICRC, Devendra Dhungana

In spite of obvious constraints, the commitment showed by health workers in Nepal cannot be overemphasised. From senior doctors to sanitation workers, all chipped in with their expertise and resources minutes after the big quake struck on April 25. To deal with a disaster of such an unprecedented scale and magnitude, the key for medical professionals has been – taking swift decisions without losing time. Sibi Arasu gives a first-hand account of how the situation unfolded and how to better prepare for similar natural hazards in future.

One month ago – on April 25, 2015 – Doctor Pawan Kumar Sharma, 53, rushed from his house to Patan Hospital, which he heads as director. “I made sure my children and wife were alright and immediately took off on the bicycle,” says Dr Sharma. I met him a day after the second big quake – which jolted the country on May 12. “Whenever I felt a tremor I stopped the cycle, then continued once it abated. I made it to the hospital in less than 30 minutes. I had to presume my family was safe through the tremors, I didn’t have a choice. I was needed at the hospital,” adds Dr Sharma, who stayed on for three days straight at the hospital before returning home.

The earthquakes and the ensuing health crises seem to have brought out the best among the city’s public health professionals.

The grit and determination of the healthcare professionals was palpable when I spoke to them. They were committed to help in any way they could – not only in the face of adversity, but also in the face of poor infrastructure and sometimes inadequate medical equipment.

A model to be replicated 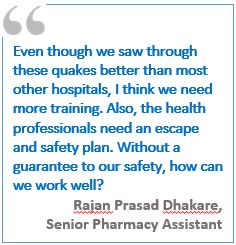 In Kathmandu, Patan Hospital seemed best prepared to face large scale disasters. The hospital reportedly conducts mock drills every six months. “The timing, staff response… Everyone was so well tuned. Everyone knew where to go, what to do, whom to look for help, what to communicate and what not to,” says Dr Ashish Shrestha, 34, a senior doctor with 12 years of experience. Shrestha was on the frontline of Patan’s response, with more than 1,000 patients coming to the hospital in the days following the disaster. There were 57 deaths at the hospital.

A disaster triage area was set up immediately and patients taken to different sections marked Green, Yellow and Red based on the seriousness of their injuries. The hospital was able to handle the tremendous inflow better. “We have nearly 900 staff. Most knew what to do and therefore reacted well,” says Sharma. He adds, “Looking at how my staff reacted, it gives me great hope.”

Rajan Prasad Dhakare, 41, senior pharmacy assistant, was stepping out for lunch when the earth shook. “I saw the traffic signal post falling down just as I stepped out. We immediately crouched down and when the shaking stopped I returned to my pharmacy inside the hospital,” says Dhakare. He later rushed to his house which is 15 minutes from the hospital and made sure his family was safe and returned to the hospital where he worked until 11pm that night. “Even though we saw through these quakes better than most other hospitals, I think we need more training. Also, the health professionals need an escape and safety plan. Without a guarantee to our safety, how can we work well?” asks Dhakare.

Senior staff nurse Sulochana Basakala, 32, was on emergency duty when the quake struck. “I was sitting on the chair when everything started to shake. All the patients and nurses got really scared and since I had heard that most quake injuries are because of fires, I ran out of the ER,” Basakala says. “All the phones were down but patients started coming almost immediately, so I began attending to them,” she adds. When the phone lines came back, Basakala made sure her family was safe. Her in-laws were able to take care of her children while she was at work.

While in her normal routine she works seven-hour shifts, Basakala worked straight for 32 hours on the day of the quake. “As senior staff nurse, I had to manage all the equipment. I had to instruct the other nurses as to what to do, where to go. The commitment is surely there but we have to improve and handle the situation better the next time.” 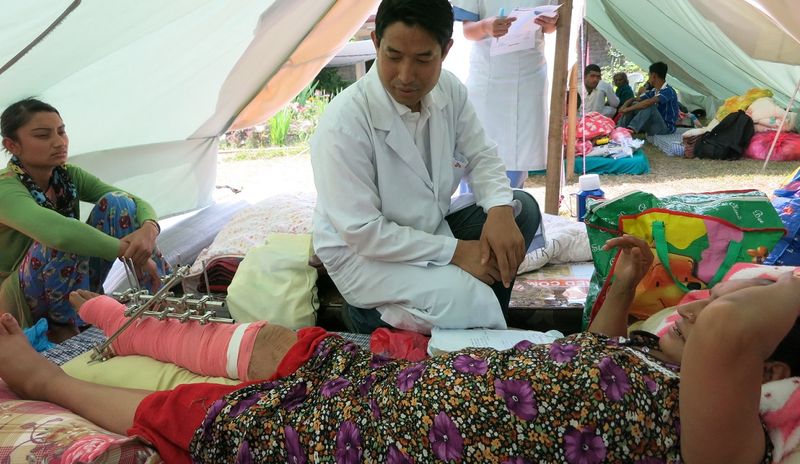 Giving it all that they can

Suresh Khadke, 36, a public health inspector, had completed one year on the job at Panga when the April 25 earthquake struck. “On a regular day, we get a maximum of 25 to 30 patients,” Khadke told us. In his more than a decade-long experience as a health official, the first three days after the great earthquake were the most difficult. “On the day of the quake it was a holiday and the health post was closed. But once patients started coming in, we set up a temporary health camp outside and received hundreds of them,” he adds. Khadke and his team of five at Panga could offer little more than basic first aid. With their health post itself in a dilapidated condition, it only made their job harder.

Unlike Panga and many other health posts across the country, the Budhanilakantha health post, having been recently renovated, survived the quakes without much damage. “We received a lot of head injuries as well as a lot of trauma cases.” says Dattaram Adhikari, 30, health assistant who had his living quarter above the health post itself.

All of the 11 staff here were on constant duty for the first few days, providing medicine and first aid from a tent setup outside the health post. “Some disaster preparation would have definitely helped,” says Adhikari. “Even though I’m happy with how we reacted, we felt very inadequate. Thankfully none of our families was affected too badly but some of us are yet to recover from the psychological effects of the quake,” he adds.

In Kathmandu’s hospitals and the smaller health setups, the overwhelming response to the earthquakes has been one filled with commitment, stepping up to the task at hand when faced with a dire situation like never before. At the same time, lack of preparedness, both mentally and modus-operandi wise has taken its toll on the health workers, leaving them with high levels of stress. The need of the hour is counselling for the health workers themselves. As Dr Sharma of Patan Hospital says, “I’m really happy with how my people responded. But we also have to keep in mind that one day, every doctor will also break.”

They Fondly Call Him ‘The Ambulance Uncle’