Hosted by the ICRC, the Asia Pacific Media Conference saw 23 senior media representatives from 12 countries gather in Hiroshima, Japan from 26-28 November 2014. The deliberations lasted a day and a half and contributed to advancing discussions on the media’s role in reporting on man-made and natural disasters in today’s communication environment as well as on how professional journalism can build credibility and trust in the age of citizen journalism and social media.

Ms Meena Menon, former deputy editor, The Hindu, who participated at the conference spoke on the topic: Journalists today are expected to do more with less. On request, Ms Menon shares part of her experience at the conference. Here are excerpts:

How do journalists deal with Post Traumatic Stress Disorder (PTSD) after constantly being exposed to violence and violent images, do embedded journalists find their independence taken away, do you use graphic images to illustrate stories, how do you ensure stories are followed up and how do you or your media house stay with the story. Those were some of the most pressing questions discussed by journalists at the 2014 media conference on reporting conflict and disasters in Hiroshima. The question of PTSD and funds to cover conflict was raised by some journalists and Marilou Manar, who reports from the forests of Mindanao, said she was traumatised by what she sees not only in conflict but also in the waves of natural disasters that have battered the Philippines. Peter Cave from Australia, who is dealing with the issue, admitted it was a serious enough problem faced by the media community which needs to be addressed. 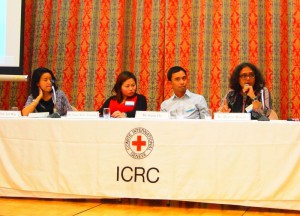 Ms Meena Menon, former deputy editor, The Hindu, who participated at the conference spoke on the topic: Journalists today are expected to do more with less. @ICRC

Reporting conflict also involved abundant caution and not taking risks as far as possible and the point was illustrated by a depressing story in 2003 which involved a Japanese photo-journalist. He pocketed a piece of a cluster bomb as a souvenir from Iraq which exploded at the airport while he was transiting through Jordan, killing a security guard. Hiroki Gomi from the Mainichi Shinbun was   sentenced to 18 months in prison because he was a foreigner. Despite covering wars and conflict for 12 years, Gomi did not have much of an idea that a cluster bomb wouldn’t make for a safe souvenir.

A set of best practices were also agreed upon which mainly focused on the need for ethics, self-protection and professional values in reporting and also looking at issues for instance the series of natural disasters in a context as part of the overall impact of a warming world. What will stay with me is the meeting with survivor Keiko Ogura from the Hiroshima bombing and visiting the peace memorial and museum which was a deeply moving experience. The exhibits were evocative of the terrible day and its brutal aftermath when thousands of people were killed or maimed for life.

The conference too provided me with opportunities to interact with members of the media from other parts of the world and learn from them. As a journalist these interactions are very valuable in many ways.