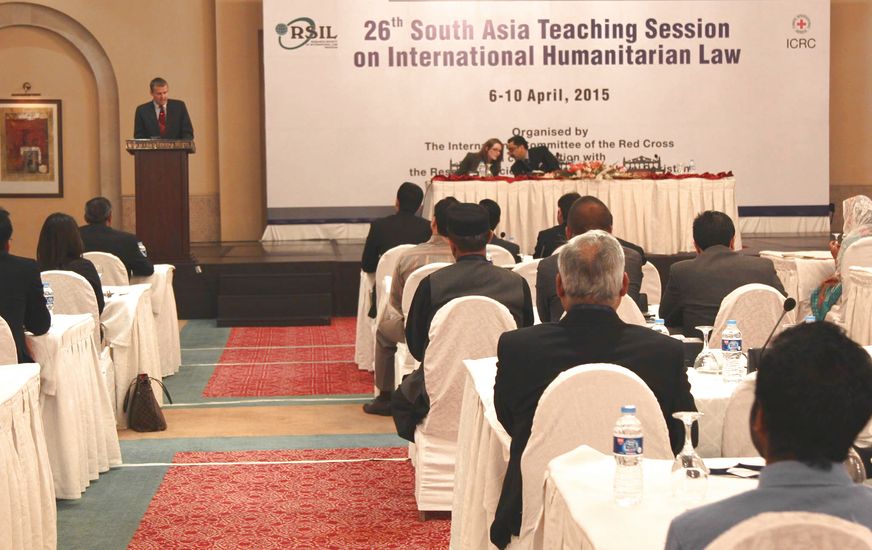 Head of the ICRC Delegation in Pakistan, Reto Stocker, addressing participants at the 26th SATS on IHL in Islamabad. ©ICRC, Sayed Arif Hussain

The 26th South Asia Teaching Session on International Humanitarian Law (IHL), organized by the ICRC with the collaboration and support of Research Society of International Law Pakistan (RSIL), is currently underway in Islamabad, Pakistan. The five-day event kicked off on 6 April and is being attended by 71 nominated participants from Bhutan, Bangladesh, Nepal, India, Afghanistan, Sri Lanka, Maldives and Pakistan. The participants include government officials, members of the armed forces, police services, academics and representatives of civil society organizations.

Head of the ICRC Delegation in Islamabad, Reto Stocker, addressed the gathering in the opening session on 6 April. 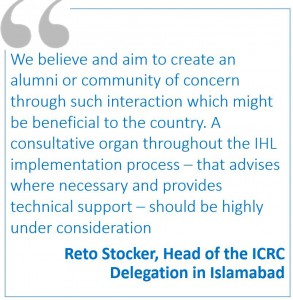 Emphasizing on the obligation to carry out dissemination of IHL and its comprehensive implementation, he said, “The ICRC needs coordination and support from all the government departments and entities concerned for implementation of IHL.” He also added, “We believe and aim to create an alumni or community of concern through such interaction which might be beneficial to the country. A consultative organ throughout the IHL implementation process – that advises where necessary and provides technical support – should be highly under consideration.”

The chief guest, Ahmer Bilal Soofi, who is the President of Research Society of International Law, an expert on International Humanitarian Law in Pakistan, former Federal Minister of Law and Justice, Parliamentary Affairs Law and Justice, also shared his views during the opening session by stressing on the need and importance of IHL. He said, “Pakistan being the signatory to almost all the major international  instruments, there is overwhelming desire among the government circles to integrate those instruments into national legislation and the organization of international events like SATS is indeed a milestone in that direction.” 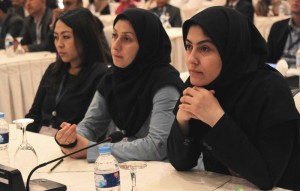 The South Asia Teaching Session (SATS) on International Humanitarian Law is a tremendous learning opportunity for participants who are interacting with the officials in Pakistan and sharing their views on a platform where the progress, understanding and implementation of IHL in different countries can be assessed and analyzed.

SATS, a training course on IHL, is a biannual event that is organized by the ICRC in South Asia nations with the objective of imparting knowledge on IHL. It provides a vibrant forum for discussion of present-day challenges to IHL and of the relevance of IHL in post-conflict situations. The course helps train mid-level professionals — including government officials working in ministries/departments on issues relating to IHL — in the fields of international law, human rights, and international relations and defence studies.

To view an album of snapshots from the event, go to the Picture Gallery or visit the ‘IHL in Asian Academic Circles’ page on Facebook.