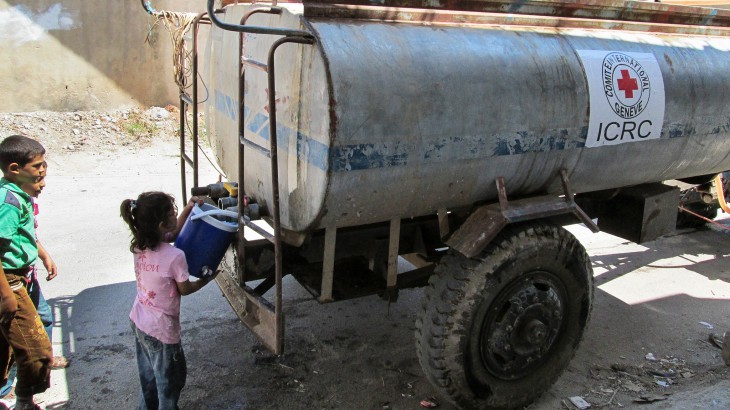 A displaced girl stocks up on water from an ICRC water truck in Syria. ©ICRC

With heavy fighting continuing to tear apart Syria and Iraq, and many communities still recovering from conflicts in Lebanon, Israel and the Occupied Palestinian Territory, the region’s water resources and aging delivery systems are reaching their breaking point, according to a new report by the International Committee of the Red Cross.

Even without the devastating impacts of recent droughts and ongoing conflicts, many Middle East and Gulf states would be struggling to meet the basic water needs of growing urban populations and rising food production demands. Now with some 7.6 million people displaced within Syria and some 3.8 million seeking safety in neighbouring countries — along with another 2.5 million displaced due to fighting in Iraq — the situation is even more critical.

“Water systems in the region are under great stress,” says Peter Maurer, president of the ICRC. “Water sources are being rapidly depleted and water infrastructure is being badly damaged in areas where local authorities were already hard pressed to meet the needs of growing populations. Massive displacement due to conflict is only amplifying the problem. If urgent efforts are not made, we will reach a breaking point. This is why we must act now to protect and preserve this most essential, life-giving resource.” 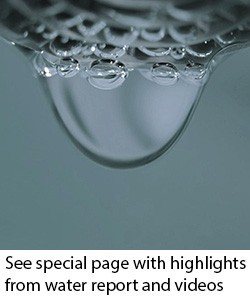 But record-low rainfalls, diminishing aquifers, overuse of scarce resources and the devastating impacts of conflict have made clean water increasingly difficult to come by. To make matters worse, warring parties sometimes target water and power-supply infrastructure or deliberately interrupt supplies for military or political gain.

“Using access to water as a tactic or weapon during conflict, or targeting water or energy facilities, not only violates the laws of armed conflict, it has very harmful effects on the lives of people whose health is already extremely vulnerable,” says Robert Mardini, ICRC’s head of operations for the Middle East.

“Such attacks are particularly harmful because water, sanitation, electrical and energy supplies are intimately interconnected,” Mardini continued. “An attack on an electrical station, for example, could have a very serious impact on sewage treatment, water availability, the quality of water, or the functioning of health facilities. The humanitarian community does not have the capacity to meet the populations’ needs by continually substituting services or by offering quick-fixes.”

In many cases, sewage and other wastewater is not being properly treated, posing a serious threat to community health among already vulnerable populations. Water networks lose significant amounts of water due to lack of maintenance — a situation often caused directly by conflict. In Syria alone, local officials estimated in 2014 that they lost 60 percent of pumped water through gaps in the network due to damage caused by the conflict.

While there are no easy solutions to the region’s water woes, the ICRC and its national partners are already making a tremendous difference in the lives of millions of people affected by conflict. By working with national Red Cross and Red Crescent Societies, as well as local water and power authorities, the ICRC has been able to keep vital services running. Even during intense fighting it has helped provide badly needed clean water to millions of people in all the affected countries. “There are reasons to be hopeful,” says Mardini. “This is largely a problem caused by humans and it can be solved by humans. But it depends on the support and concerted efforts of everyone, from the international community to local communities. The problem and the solutions belong to everyone, and we must make sure the water flows for everyone”. 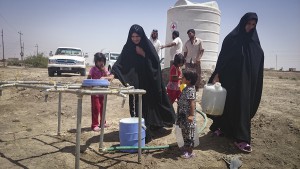 People collecting water from a water-supply point built by the ICRC in Iraq. ©ICRC

Red Cross and Red Crescent action across the Middle East in 2014:

More on the situation in the Middle East: