Since its inception 15 years ago, the South Asian Teaching Session (SATS) programme has developed into a prestigious and regionally acclaimed event, with participants from 10 countries, including Afghanistan, Bangladesh, Bhutan, Iran, India, Maldives, Myanmar, Nepal, Pakistan and Sri Lanka. Over the years, the participants have gone on to scale great heights and the ICRC wished to convene and reunite SATS alumni and thereby expand the forum for dialogue on international humanitarian law (IHL) and to share perspectives on its development.

On 11 September 2014, the ICRC regional delegation in New Delhi organized a SATS alumni meet at its delegation office. The meet gave the guests the opportunity to participate in a panel discussion on ‘Protection of civilians in armed conflict and other emergencies’, led by Justice Geeta Mittal of the Delhi High Court and army veteran Lt Gen Satish Nambiar, PVSM, AVSM, VrC (Retd).

The ICRC, through the SATS, imparts knowledge on IHL and trains mid-level professionals — including government officials working with ministries/departments — in the field of international law, human rights, international relationsand defence studies on IHL. The teaching session focuses on the academic aspects of IHL, and the participants include government officials, academicians, NGO representatives and military officers.

Initially, this teaching session drew the attention of the those involved in teaching courses on public international law, political science, international relations, human rights, and defence and strategic studies in universities and colleges in the South Asian region. SATS gradually gained in popularity and has witnessed participation from members of government departments, military circles and civil society groups who were dealing directly or indirectly with IHL issues in their professions.

Videos of the meet are available on a DVD that can be acuired from the ICRC New Delhi Documentation Centre. 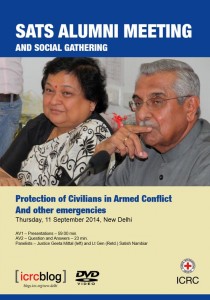