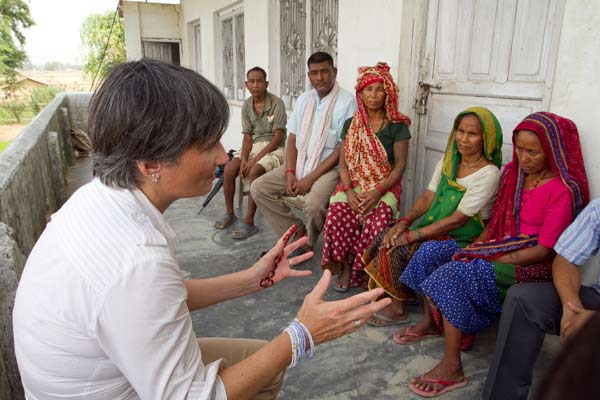 Bhaisahi-8, Bardiya district, Nepal: Families of missing persons discuss their experiences with former ICRC head of delegation Sylvie Thoral. The head of delegation was visiting a memorial temple built by the families, jointly with a local school. ©ICRC

The International Committee of the Red Cross (ICRC) and the Nepal Red Cross Society (NRCS) will commemorate the International Day of the Disappeared (IDD), which falls on August 30, by organizing a national-level function in Kathmandu on September 1, 2014.

On the occasion, the ICRC and the NRCS will release the seventh edition of the list of missing persons, entitled Missing Persons in Nepal: Updated List 2014. The list contains the names of 1,347 people who went missing during Nepal’s 10-year-long armed conflict.

The event, which will be attended by the families of missing persons from Kathmandu, Lalitpur and Bhaktapur districts, will bring together representatives of the Nepal Society of Families of the Disappeared and Missing (NEFAD), government officials, members of the armed and security forces, human rights and civil society organizations and media. The Nepal minister for peace and reconstruction, Narahari Acharya, will grace the occasion as the chief guest.

Besides the event in Kathmandu, over 50 district chapters of the NRCS are organizing various events across Nepal to mark the day.

Following a 10-year-long armed conflict in Nepal, which ended in November 2006, families of 3,198 missing people reported to the ICRC and the NRCS the disappearance of their relatives, often following their alleged arrest or capture by one of the parties to the conflict, or during armed encounters.

As a neutral, independent and impartial humanitarian organization with an international mandate to alleviate the suffering of the victims of armed conflicts and other situations of violence, one of the tasks of the ICRC is to assist all parties to the former conflict in Nepal to fulfil their obligations to clarify the fate and whereabouts of missing persons. The various field assessments conducted by the ICRC and the NRCS on the needs of these families have repeatedly shown that their primary need is to know what happened to their missing loved-ones, even years after the events took place.