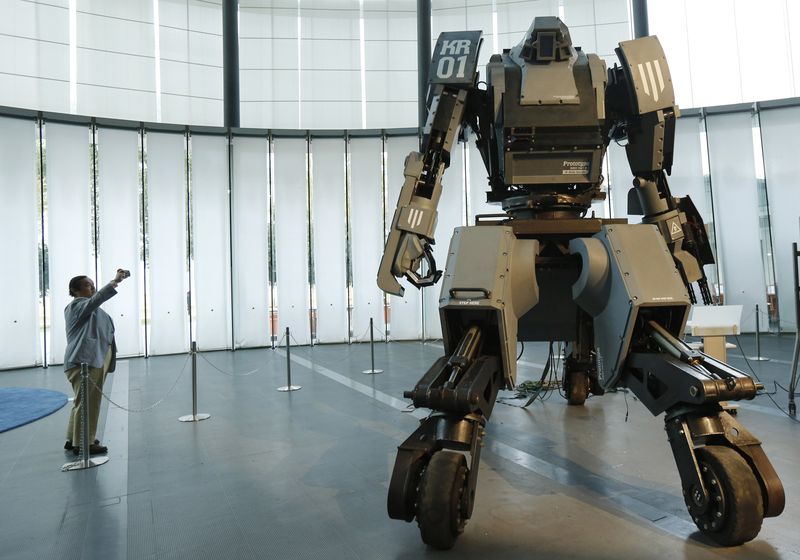 A robot armed with a futuristic weapons system, at an exhibition in Tokyo. © Reuters / K. Kyung Hoon

The ICRC, which is urging States to assess whether the new technologies of warfare — cyber attacks, armed drones and robots — they develop comply with International Humanitarian Law (IHL), set in motion in March a Conference Cycle entitled ‘New Technologies and the Modern Battlespace: Humanitarian Perspectives’. Till June 2014, several public events are being organized at the Humanitarium in Geneva and elsewhere with a view to addressing the novel humanitarian, legal and ethical challenges posed by new technologies.

In this context, the ICRC is calling for new weapons with autonomous features to be subject to a thorough legal review to ensure they are capable of being used in accordance with IHL, something States are required to do for any new weapon. It must be stressed that the ICRC is not at this time joining calls for a moratorium or ban on autonomous weapon systems.

Major concerns persist over whether a fully autonomous weapon could make the complex, context-dependent judgements required by IHL. For instance, in the heat of battle, would an autonomous weapon be capable of distinguishing between a civilian and a combatant? Would it be capable of cancelling an attack that would have disproportionate incidental effects on civilians?

“The central issue is the potential absence of human control over the critical functions of identifying and attacking targets, including human targets. There is a sense of deep discomfort with the idea of allowing machines to make life-and-death decisions on the battlefield with little or no human involvement,” said Ms Lawand, head of the ICRC’s Arms Unit.

The ICRC held a meeting on autonomous weapon systems from 26-28 March 2014 with the aim of arriving at a better understanding of the issues raised by autonomous weapon systems and to share perspectives among government representatives, independent experts and the ICRC. The meeting brought together 21 States and 13 independent experts, including roboticists, jurists, ethicists, and representatives of the United Nations and non-governmental organisations. To read a report on the meeting, click here.

The ICRC also spoke at a meeting of experts on lethal autonomous weapons systems held in the framework of the Conventional Weapons Convention in Geneva from 13 to 16 May 2014. The four-day meeting, convened by States party to the Convention on Certain Conventional Weapons, set the stage for States to begin exploring the fundamental legal, ethical and societal issues raised by autonomous weapon systems. To read the address, click here.

The debate on autonomous weapons reaches far beyond legal and technical complexities, raising fundamental questions about the role of humans in taking lethal decisions in armed conflict. The decisive question may very well be whether such weapons are acceptable under the principles of humanity, and if so under what conditions. Read the ICRC news release on the topic: ‘Autonomous weapons: What role for humans?’

To learn more about autonomous weapons and the challenges they pose to IHL, click here.