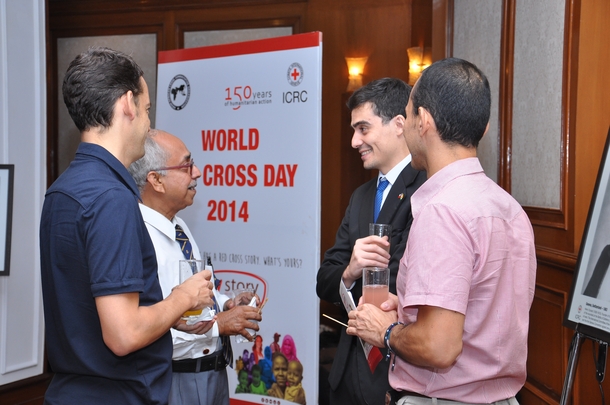 The International Committee of the Red Cross (ICRC), Regional Delegation for India, Bhutan and the Maldives, along with the Asian-African Legal Consultative Organization (AALCO), celebrated the spirit of humanity on World Red Cross Red Crescent Day on 8 May by organising a photo exhibition and a scintillating social gathering at The Claridges Hotel in New Delhi.

Across the globe, 8 May is celebrated as World Red Cross Red Crescent Day. It is the day we celebrate the power of community and people helping people, both in the spotlight during crises and behind‐the‐scenes in day‐to‐day life. This year, in order to commemorate World Red Cross Day, we invited people from all over the world to share their Red Cross stories with us. 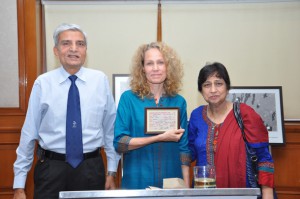 ICRC New Delhi’s celebration at The Claridges was made special by the presence of war veterans who were held as POWS during the 1971 India-Pakistan War. In keeping with the theme of the occasion, they shared with us their Red Cross stories. Air Vice Marshal (Retd) Aditya Vikram Pethia, a Vir Chakra-awardee, who attended the event, gifted Ms Mary Werntz, Head of New Delhi Regional Delegation, ICRC, his POW ‘capture card’ which he had saved from the time of the War, as a token of appreciation for the help rendered to him by the ICRC. “I am thankful to the ICRC for my repatriation to India on 8 May 1972 as a sick and wounded POW from Pakistan,” said Mr Pethia. “I am very touched by the gesture,” said Ms Wentz.

Earlier, Air Commodore (Retd) J.L. Bhargava shared with us his fond memories of how the ICRC had improved his stay in a Pakistan camp as a POW during the 1971 War. The AV interview is posted on the ICRC New Delhi Blog at bit.ly/1hwWraJ .

The guests list of the event was eclectic, including attachés from various embassies, representatives of the European Union, the UNHCR, the International Federation of the Red Cross Red Crescent Societies (IFRC), along with academicians, journalists, security officers and lawyers of international and national repute.

Professor Rahmat Mohammed, Secretary General, AALCO, and Dr S.P. Agarwal, Secretary General, Indian Red Cross Society (IRCS), made opening remarks on the occasion. Ms Werntz welcomed the guests on behalf of the ICRC and its partners, the IRCS and the IFRC. Even as the ICRC continues to celebrate 150 years of humanitarian work, Ms Werntz exhorted all to walk with the ICRC in its subsequent 150-year journey. There was also a photo exhibition on our journey so far held on the side-lines of the event.

The AALCO Secretary General, while lauding the ICRC for taking the lead in holding intellectual dialogues and seminars on International Humanitarian Law, said, “We salute the ICRC, the Red Cross and the Red Crescent for their great contribution to humanity.”

IRCS Secretary General Dr S.P. Agarwal, said: “We are 150 years young. We are involved in the common purpose of helping people. We stick to our fundamental principles…” He added that the IRCS was proud to partner with the ICRC and conveyed his best wishes to all on the occasion.

Ms Werntz reminded all present of the ongoing humanitarian crises in places like the Central African Republic, the Philippines and Syria. “This is a day to remember the power of an individual act of kindness, a spontaneous act of compassion, a voice of tolerance, an outstretched hand of helpfulness, of people giving instinctively,” she said.

Invoking the words of Mahatma Gandhi: “The greatness of humanity is not in being human, but in being humane,” Ms Werntz ended her address by saying: “Go ahead, create and share your Red Cross story. Do it for Humanity.”

To watch the addresses of the speakers at the event, click below.

To read the Red Cross and Red Crescent stories shared by people worldwide, click on the tab ‘My Red Cross / Crescent Story’ on the home page of this blog.

To share your story with us, mail us at icrcnewdelhi@gmail.com.