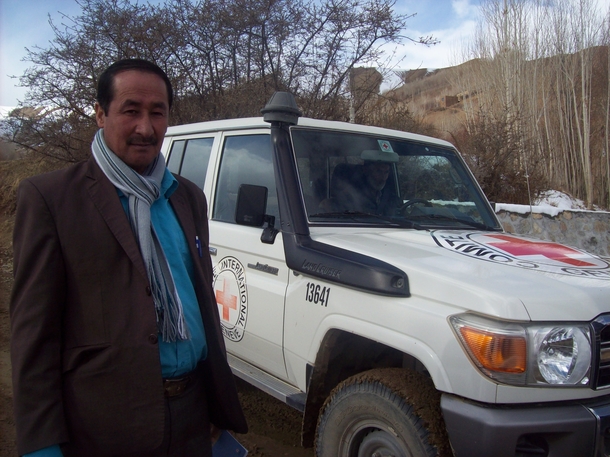 As a youngster, I had seen the suffering of my people during the War in Afghanistan, and I had also seen the ICRC’s work in hospitals and the assistance it provided to those in need. I was so inspired by the ICRC’s humanitarian work that I joined the organization in December 2001. In the beginning of the following year, I started working in the Bamiyan province office of the ICRC as an administrative assistant. In late 2003, after intensive training, I was given responsibility of the entire office.

Today, I am still head of the Bamiyan office, where I oversee the management, monitor the environment and the security situation; field projects to improve people’s access to clean water; and refer people with disabilities to the Kabul ICRC Orthopaedic Centre. I also keep in touch with our colleagues in the Afghan Red Crescent in Bamiyan and Daikundi provinces.

When the going gets tough, the good work done by the ICRC keeps my spirits high and strengthens my commitment to reach out to those who need humanitarian assistance. The smile our work brings to people’s faces is my reward. I would like to share one such story that really touched my heart — that of Saed Aziz, an orthopaedic patient who was helped by the ICRC.

Saed Aziz (23) lived in the countryside near Bamiyan town with his family as a child. Although Aziz’s father was extremely poor, he wanted to give his son a good future and sent him to school a few kilometres from the village. Aziz used to walk to school every morning. He loved studying and never complained despite the extreme temperatures he had to brave. Aziz continued his studies until his family’s impoverished state made it impossible for him to do so.

Having dropped out of school, Aziz sought his father’s permission to go work in another part of the country so he could earn a living and take care of his family. With his father’s blessings, Aziz became a soldier and was deployed at Zherai district in the southern province of Kandahar.

One day, Aziz was walking along the road in a place he was not familiar with. On his left was a wall and beyond that, a cultivated field. He was daydreaming, making plans in his head to go home to meet his family. He had promised his mother that once he returned home, he would marry a girl of her choice. Lost in his thoughts, his defences down, he was caught unaware by a sudden explosion. His world became dark as he passed out from pain and bleeding caused by injuries he sustained in the blast. As he faded in and out of consciousness, he kept wishing his parents were by his side to take him to the hospital.

Aziz was finally rescued by some local people in the area. The rescue was very difficult, because the land on his right was riddled with mines and on his left was the wall. Eventually, the rescuers succeeded in transferring him to a relatively safe place.

But the worst was yet to come. When he regained consciousness, Aziz realized that he had lost his right leg, which was almost torn from his knee. In his semi-conscious state, he had thought that he had only surface injuries. His rescuers decided to take him to the nearest hospital, which was located quite some distance away.

When he was finally discharged from the hospital many days later, after having been operated on, Aziz returned home to his family on a single leg. His mother was grief-stricken to see her son’s plight. Aziz’s condition also meant a huge cut in the family’s earnings.

His brother, who had heard that the ICRC helped rehabilitate persons with disabilities and injuries, approached our Bamiyan office and presented Aziz’s case. He enquired whether it would be possible for Aziz to be treated at one of ICRC’s orthopaedic centres in the country. An appointment was fixed for him and referral transport arranged to the orthopaedic centre in Kabul on 1 March, 2014.

Aziz was received warmly by the staff at the Kabul centre. His rehabilitation initially took almost a month, during which time accommodation and food were provided to him. Over the weeks, he learnt to walk again with the aid of crutches and an artificial limb.

He came back to his village on 29 March, 2014, walking on his own two feet. Happy to be able to lead a normal life, Aziz was reintegrated into the community. He now plans to open a small business in Bamiyan town and earn his livelihood once again so he can live with dignity.