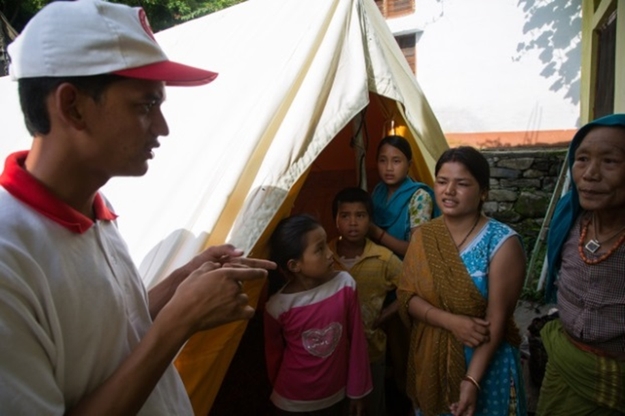 Jeevan interacts with victims of the Uttarakhand floods ©IRCS

Jeevan Thakur, a BA final year student at a university in Pithoragarh district of Uttarakhand, feels his calling lies in humanitarian work. Jeevan, who has been volunteering for the Indian Red Cross Society (IRCS) for over three years now, was initiated into the domain when the IRCS started its Certified First Medical Responders (CFMRs) programme in Uttarakhand in 2011. The First Medical Responder (FMR) is a unique programme of the Red Cross where members from within the community are trained in handling various aspects of post-disaster situations — first aid, health and sanitation, psycho-social support etc.

Motivated by his work as a volunteer, Jeevan became a life member of the IRCS. In April 2013, he attended the CFMR refresher training held in Uttarakhand. A couple of months later, Jeevan got a chance to put his Red Cross training to use when Uttarakhand was hit by one of the worst disasters in recent times. The June 2013 cloudburst and subsequent floods, which claimed thousands of lives and led to the loss of homes and livelihoods of countless others, gave rise to huge humanitarian needs in the state and Jeevan was one of the initial responders.

When disaster struck, Jeevan stepped out of the security of his hostel and took on his role as a Red Cross volunteer. Throwing all caution to the wind, he climbed up the treacherous mountains to come to the aid of victims of the tragedy, armed with just a first aid tool kit provided by the IRCS. Helping whoever he could reach with first aid, basic information to help them head out of the mountains and even psycho-social support, he was a godsend for the flood victims he came by. “I walked and climbed 22km on foot, when everyone in the plains told me it was dangerous,” he says with pride.

Over the years, Jeevan has been taken on many roles as a IRCS volunteer. He is part of the National Disaster Response Team at the IRCS National Headquarters in New Delhi, which is activated as soon as a disaster strikes anywhere in the country. The members of the team are given training from time to time to hone their response skills. Jeevan’s efforts have also been awarded by the state and the state branch of the IRCS. Smiling shyly, he says: “I now want to buy a foldable tent and a digital camera, so the next time something goes wrong, I will have a shelter to spend the nights while travelling and helping people. I have even convinced some of my friends to come with me if the need arises, as this area falls in a high-risk seismic zone and is vulnerable to natural disasters.”

The Red Cross applauds Jeevan’s spirit of humanity. He is a motivation for young people to join the International Red Cross Red Crescent Movement and help society.”

May 8 is World Red Cross Red Crescent Day celebrating the power of community and people helping people. Share your Red Cross or Red Crescent story at ifrc.tumblr.com or mail it to us at icrcnewdelhi@gmail.com. 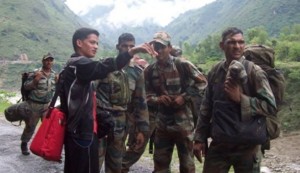 Jeevan guides armymen in the mountains of Uttarakhand ©IRCS