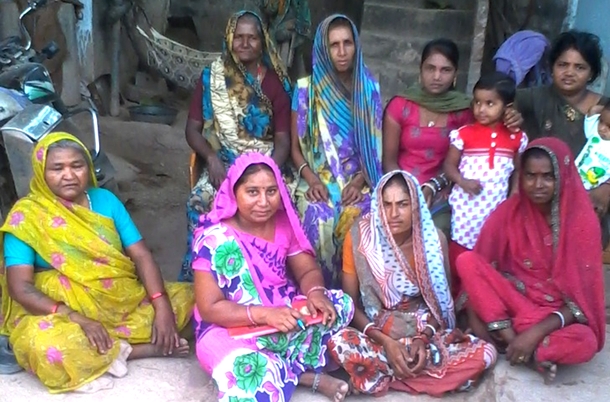 Bhavnaben with women of the Gujarati community ©IRCS

Dressed in a traditional ‘seedha pallu’ saree, Bhavnaben hails from a traditional Gujarati household where women are rarely seen as breadwinners or role models. Staying home, like many women of her community, could have been a comfortable, secure option for her, but Bhavnaben craved something more — a vocation that would satisfy her desire to help people.

At 46, it is a rarity in India for anyone, especially a woman, to venture out and do something new. But this gutsy woman refused to bend to societal norms. The Red Cross became Bhavnaben’s volunteering call about a year ago, when she chose to motivate people from her community to get checked and treated for tuberculosis (TB).

Bhavnaben with a TB patient. She has helped five TB patients as a Red Cross volunteer ©IRCS

Taking time out from her household responsibilities, Bhavnaben cheerfully goes around designated localities, tracking TB patients and motivating them to go to the nearby DOTS centre for the required dosage of treatment drugs. Many a time, Bhavnaben even accompanies TB patients to the DOTS centre.

Through her efforts, a poor vegetable vendor, Limabhai, was diagnosed as a confirmed TB patient after two years of intermittent coughing. Bhavnaben motivated Limabhai to undergo investigations under the Indian Red Cross Society (IRCS)-run TB control project in Surendranagar district of Gujarat.

She counselled him and assured him that his condition was completely curable and that his treatment would be totally free. She first took him to the hospital for a check-up, where he was declared TB positive. Bhavnaben’s efforts did not stop here. She accompanied Limabhai to the DOTS centre and stood by him during the entire treatment. Now fully cured, Limabhai is all praise for Bhavnaben and lauds her humanitarian work.

Bhavnaben has helped cure five Category II TB patients under the IRCS’s TB Project, India. The success of Red Cross programmes is hinged on the persistent and unrelenting efforts of volunteers such as Bhavnaben. The IRCS appreciates the sincere efforts of such motivated volunteers, who draw their inspiration from an undying humanitarian goal. Three cheers for you, Bhavnaben!

May 8 is World Red Cross Red Crescent Day celebrating the power of community and people helping people. Share your Red Cross or Red Crescent story at ifrc.tumblr.com or mail it to us at icrcnewdelhi@gmail.com.