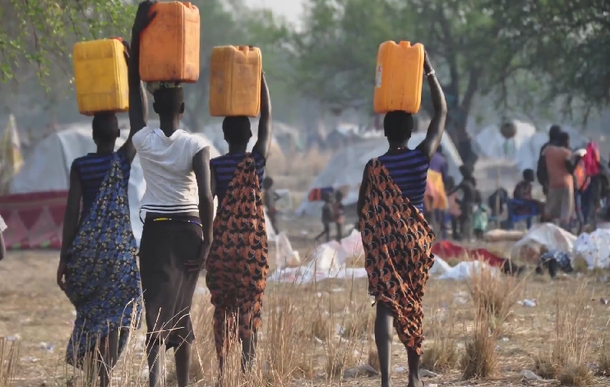 Displaced South Sudanese people are living under the open sky and are in desperate need of food, water and shelter. ©ICRC

“In my home, I used to drink milk and I slept in my own house. Everyone was killed. Now I have nothing,” rues a displaced South Sudanese woman over the loss of the little comforts of her life that the violence there has snatched away. 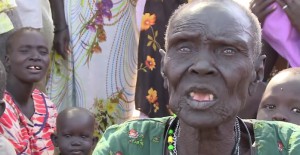 A displaced woman counts her losses and shares her fears for her grandchildren’s lives. ©ICRC

The woman, in her seventies, fears for the lives and health of the hoard of grandchildren of various ages surrounding her. “The children here are suffering from the cold. I am afraid they will die too, because they are sick… I have no life,” she tells ICRC media delegate Marco Yuri Jiménez.

Four months after the beginning of the conflict in South Sudan, humanitarian needs continue to increase. Hundreds of thousands of people are displaced. Tens of thousands need medical care. The displaced are living under the open sky, taking shelter under trees. Exposed to the elements, they are vulnerable to illnesses and are in desperate need of medical care, food, water and basic shelter. The medical infrastructure of the country, which was meagre to begin with, has largely been destroyed in the violence and many medical personnel have themselves been displaced.

With fighting continuing in several areas and the rainy season approaching, the ICRC is concerned as the rains will compound the problems of the people and the humanitarian organizations providing relief and aid. It will also affect the ICRC’s work, as roads will become impassable and aircraft will not be able to use landing strips that have turned to mud. The ICRC has boosted its logistical capacity, but it will still be a challenge to provide humanitarian aid to the people.

The ICRC is carrying out emergency surgical operations, providing food and household items to tens of thousands of people and setting up water points. ICRC teams are working in all 10 states of South Sudan, including remote areas in the worst-affected regions such as Bor, Awerial County, northern Jonglei, Mayendit, Malakal, Rokon (Central Equatoria) and Twic County (Warrap state). We currently have 600 staff in the country working in close cooperation with the South Sudan Red Cross.

“We are concerned about the worsening of the humanitarian situation. There is growing food insecurity since the production and marketing of food have been disrupted in many places by violence or displacement,” said Melker Mabeck, head of the ICRC delegation in South Sudan. “This, combined with disruptions to water and health services where they exist, means that needs will only become more critical.”

As fighting continues in some parts of South Sudan, the ICRC is reminding the parties of their obligation to abide by the rules of international humanitarian law. “They must respect civilians and their property. Civilians and people no longer taking part in hostilities must be spared,” said Mr Mabeck. The ICRC is also reminding all parties to respect medical personnel and facilities and allow health care access to anyone who is wounded or sick — civilian or combatant, regardless of which side or ethnic group the person is from.

Click below to read about the ICRC’s concerns ahead of the rains:

Click here to listen to Melker Mabeck explain the challenges in South Sudan and the ICRC’s response.

Listen to displaced South Sudanese people speak about how they are coping with living in the open.

Listen to ICRC surgeon Luisa Mancini talk about the healthcare challenges posed by the violence.