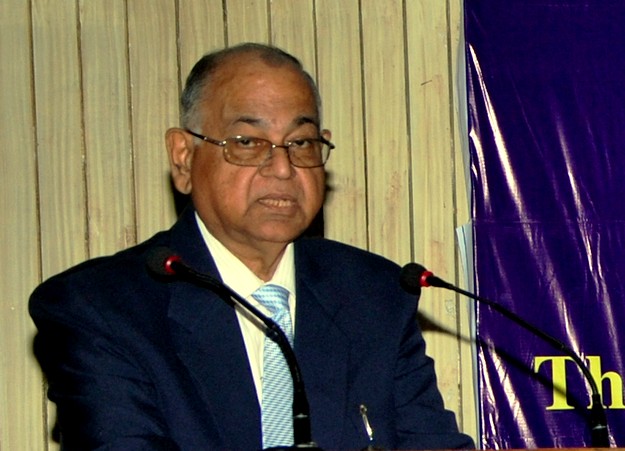 For the past year, the ICRC has been drawing attention to the largely invisible problem of sexual violence in armed conflict. It has pledged to reinforce its response to such violence with a four-year (2013–16) commitment. The goal is to improve the quality and reach of its response to victims of sexual violence, while strengthening its action aimed at preventing such violations.

In keeping with this, the Fifth South Asian Conference on International Humanitarian Law to be held in Kathmandu, Nepal will be centred on the theme ‘Sexual Violence and Armed Conflict’. The meet is being organized jointly by the Government of Nepal and the ICRC from 8-10 April.

Bringing this issue to the fore on the New Delhi Blog is a piece by Professor V.S. Mani, Director, Jaipur National University, who is scheduled to speak on the first day of the Kathmandu conference. This is the first of several such contributions by experts participating in the conference that we will be posting on our blog.

ICRC Customary IHL rule 93 quite simply postulates: “Rape and other forms of sexual violence are prohibited.” Its commentary is summarized as follows: “State practice establishes this rule as a norm of customary international law applicable in both international and non-international armed conflicts.”1

Sexual violence is an ‘invisible’ yet one of the most heinous crimes being committed mainly against women, girls and children, both during armed conflict and in the absence of armed conflict. It depicts in the mind of the perpetrator a culture of violence and a patent lack of respect for others. All civilized societies have castigated sexual violence as a grave crime against human beings. Yet, Indian criminal laws have failed to contain its incidence.

“Conflict-related sexual violence occurs in homes, fields, places of detention, military sites, and camps for refugees and displaced persons. It occurs at the height of armed conflict, during population displacement, and continues after conflict. Although the majority of victims of sexual violence are women and girls, men and boys are also targeted in armed conflict.”2

These crimes often remain ‘invisible’ for at least two reasons. One, traditionally, they have been treated as either normal, collateral incidents of war, or not serious enough to have an impact on post-conflict ‘normalisation’ of relations. Indeed, traditionally again, women rarely had any role to play in post-conflict peace-building. Two, the victims often fail to come out in the open with a cry for justice; they would rather suffer the stigma and trauma privately and get on with their lives.

Despite its long history of silences, ignominy and dehumanization, sexual violence is now being recognized as a critical challenge to any viable post-conflict peace-building.

The Background Document for Session II of the 2008 Parliamentary Hearing at The United Nations, New York, 20-21 November, 2008, begins with a quote from Major General Patrick Cammaert, former Deputy Force Commander, United Nations Organization Mission in the Democratic Republic of the Congo (MONUC) and United Nations Operation in the Congo (ONUC): “It is now more dangerous to be a woman than a soldier in modern wars…”3  It then goes on to narrate some facts and tentative figures. “The wars that raged in Bosnia, Rwanda, Sierra Leone, Liberia, DRC and Darfur have made the military logic of mass rape undeniable. Desolate villages and fallow fields bear stark witness to the terror of sexual violence in displacing populations. Eye-witnesses recount the gang-rape of women by rebels with the stated intent of causing them to bear children of a certain lineage. An average of 40 women are [in 2008] raped daily in South Kivu, DRC; between 20,000 and 50,000 women were raped during the war in Bosnia in the early 1990s; in Sierra Leone, between 50,000 and 64,000 internally displaced women suffered sexual assault at the hands of combatants; the Rwandan genocide memorial notes that 500,000 women were raped during 100 days of conflict.”

The Parliamentary Document then portrays the gory nature of sexual violence thus: “Yet sexual violence statistics notoriously under-count real totals. Rape victims caught up in conflict or crisis are among the world’s least visible, least accessible people in some of the most austere, remote regions. Rape is a torture tactic of choice, because victims are reticent to report. Survivors are stigmatized: wives rejected by husbands, girls rendered “unmarriageable”, pregnant women accused of adultery or of tainting family “honour”. This misplaced blame and shame has deep roots in a historical absence of accountability.”

The jurisprudential contribution of the International Criminal Tribunal for Rwanda has been monumental in the context of sexual violence in armed conflict. In the Akayesu case4, Chamber I of the tribunal held that it “considers that rape is a form of aggression and that the central elements of the crime of rape cannot be captured in a mechanical description of objects and body parts. The Convention against Torture and Other Cruel, Inhuman and Degrading Treatment or Punishment does not catalogue specific acts in its definition of torture, focusing rather on the conceptual framework of state-sanctioned violence. This approach is more useful in international law. Like torture, rape is used for such purposes as intimidation, degradation, humiliation, discrimination, punishment, control or destruction of a person. Like torture, rape is a violation of personal dignity, and rape in fact constitutes torture when inflicted by or at the instigation of or with the consent or acquiescence of a public official or other person acting in an official capacity.”

According to K. Alexa Koenig, Ryan Lincoln and Lauren Groth, “Two aspects of the Akayesu decision are particularly important. First, the Trial Chamber in Akayesu discussed the relationship between sexual violence and genocide. Namely, sexual violence could be done with the intent of killing members of a group, could constitute serious  bodily or mental harm, could be comprised of measures intended to prevent births within the group, and could amount to forcibly transferring children of the group to another group. This was an unprecedented development in international law.”5

Following a 2007 authorisation by the UN Secretary-General, the UN Action against Sexual Violence in Conflict ¬(UN Action) came into being. UN Action unites the work of 13 UN entities with the goal of ending sexual violence during and in the wake of conflict.  According to its 2011-12 strategy, its functioning is based on “Three Pillars”: (1) Country Level Action: Support joint strategy development and programming by UN country teams and peacekeeping operations, including building operational and technical capacity (2) Advocating for Action: Action to raise public awareness and generate political will to address sexual violence as part of a broader campaign to Stop Rape Now (3) Learning by Doing: Creating a knowledge hub on the scale of sexual violence in conflict, and effective responses by the UN and partners.6

In March 2013, the UN Secretary-General submitted to both the General Assembly and the Security Council an important Report on Sexual Violence in Conflict7.   The report highlights the linkages between sexual violence and conflict, including the profile of the perpetrator, several “emerging concerns”, including perpetration of sexual violence against men and boys, plight of rape-born children, forced marriages to armed groups, sexual violence and illicit extraction of natural resources, use of sexual violence to achieve displacement of civilian population, the inadequacies of the post-conflict/transitional disarmament-demobilisation-reintegration processes, and so on. The report notes that “there is little or no information regarding children born from wartime rape, the unique vulnerabilities they face or their experiences.”8 The report also documents incidents of sexual violence and country responses in diverse strife-torn countries.

In at least three past resolutions, namely, 1820 (2008), 1888 (2009) and 1960 (2010), the UN Security Council affirmed that sexual violence, when committed systematically and used as a tool of war, is a fundamental threat to international peace and security, requiring an operational security and judicial response. Deeply moved by the UN Secretary-General’s 2013 Report, the Security Council Resolution 2106 (2013) has gone a step further. It recalls ‘that International Humanitarian Law prohibits rape and other forms of sexual violence.” It further:

1. Affirms that sexual violence, when used or commissioned as a method or tactic of war or as a part of a widespread or systematic attacks against civilian populations, can significantly exacerbate and prolong situations of armed conflict and may impede the restoration of international peace and security; emphasizes in this regard that effective steps to prevent and respond to such acts significantly contribute to the maintenance of international peace and security; and stresses women’s participation as essential to any prevention and protection response;

2. Notes that sexual violence can constitute a crime against humanity or a constitutive act with respect to genocide; further recalls that rape and other forms of serious sexual violence in armed conflict are war crimes; calls upon Member States to comply with their relevant obligations to continue to fight impunity by investigating and prosecuting those subject to their jurisdiction who are responsible for such crimes; encourages Member States to include the full range of crimes of sexual violence in national penal legislation to enable prosecutions for such acts; recognizes that effective investigation and documentation of sexual violence in armed conflict is instrumental both in bringing perpetrators to justice and ensuring access to justice for survivors;

4. Draws attention to the importance of a comprehensive approach to transitional justice in armed conflict and post-conflict situations, encompassing the full range of judicial and non-judicial measures, as appropriate;

11. Emphasizes the important role that can be played by women, civil society, including women’s organizations, and formal and informal community leaders in exerting influence over parties to armed conflict with respect to addressing sexual violence;

20. Notes the link between sexual violence in armed conflict and post-conflict situations and HIV infection, and the disproportionate burden of HIV and AIDS on women and girls as a persistent obstacle and challenge to gender equality; and urges United Nations entities, Member States and donors to support the development and strengthening of capacities of national health systems and civil society networks in order to provide sustainable assistance to women and girls living with or affected by HIV and AIDS in armed conflict and post-conflict situations;

This provides an ambitious platform for confronting a present-day emergency. During conflict and crisis, those least empowered suffer most. Children born of war and their mothers risk stigmatization and economic exclusion. As part of the process of adapting protection to the changing face of conflict, the instability perpetuated by sexual violence must be addressed. There is indeed a huge role for victims of sexual violence in post-conflicting peace-building.

It is from this perspective that the international community must address the processes of transitional justice in post-conflict situations, such as amnesty, truth and reconciliation commission and trial of persons accused of heinous crimes against humanity such as sexual violence.

No blanket amnesty please! It would fly at the face of the victim’s human dignity.

3. Sexual Violence against Women and Children in Armed Conflict, http://www.ipu.org/splz-e/unga08/s2.pdf.

5. The Jurisprudence Of Sexual Violence,  A Working Paper of the Sexual Violence & Accountability Project, at Human Rights Center, University of California, Berkeley, Cal., May, 2011, p. 9,  http://www.law.berkeley.edu/HRCweb/pdfs/SVA_Jurisprudence.pdf