“Journalists, while reporting on situations of emergencies, should take special care to report accurately with precise and comprehensive information that helps sufferers and aid workers know the ground realties. These reports, sometimes, are the only source of information from the ground…,” said Mr Sandeep Mishra, Senior Assistant Editor, The Times of India, while delivering his keynote address at the workshop for working journalists on ‘Ethics of Reporting in Emergencies’. The daylong workshop was organized by the Indian Red Cross Society (IRCS), Odisha State Branch, in collaboration with the International Committee of the Red Cross (ICRC), on 4 March 2014 in Bhubaneswar. 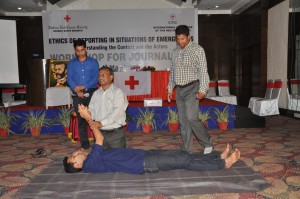 IRCS first aid trainers carry out a demonstration of basic life-saving techniques to the journalists. ©IRCS

Dr Mangal Prasad Mohanty, Honorary Secretary, IRCS, Odisha State Branch, presided over the workshop. In his inaugural speech, Dr Mohanty said: “The media has an important role to play during disasters, emergencies and times of conflict. An instant requirement from journalists in the field is that they create space for humanitarian news stories through their writings, which can help alleviate human misery and sufferings during such times.”

The workshop discussed and sensitized the media on various issues, including how journalists should report on emergency situations. The role of the Red Cross Movement and other aid agencies was discussed, as was International Humanitarian Law. The deliberations were punctuated with films and interactions among the participants, in which many shared their first-hand experiences of reporting on emergencies. The journalists also discussed the lessons learnt by them while reporting on Cyclone Phailin, which hit Odisha last year, and instances where the media played a lead role in saving the lives of civilians were appreciated. 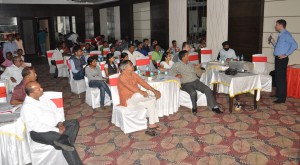 Mr Marek Resich, Communication Coordinator of ICRC New Delhi, appreciated the role of mediapersons in such situations, saying, “Mediapersons are usually the first to reach the spot, sometimes at the risk of their own lives. They’re the first to get a story out, sharing with the public what is happening on the ground, which is so crucial at that time.”

A first-hand practical first aid training was imparted to the participating journalists by Dr Bikash Prasad and Dr Jasobanta Narayan Jena on the occasion. The doctors gave the participants tips on how to react without panicking when people are injured or wounded. They taught simple medical aid techniques using material available at hand like handkerchiefs and shirts and even shirt buttons, which can be used as a hook for a broken arm support. More than 70 journalists from print and electronic media, faculty and students of journalism and mass communication participated in the workshop.