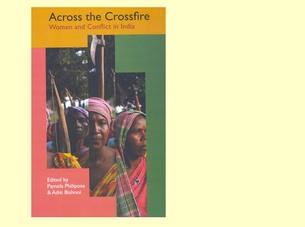 Supported by the ICRC, Across the Crossfire is a compilation of work by women writers, all generated by Women’s Feature Service between 2009 and 2011 from across the length and breadth of the country. Apart from telling stories from various zones of internal disturbances in India, the book also chronicles stories of women’s courageous resistance, their resourceful practicality and their inspirational toughness in the process of rebuilding their lives and communities.

While a story of a Sri Lankan Tamil refugee, who sacrificed her own dreams to dedicate her life to counseling those who fled to India during the ethnic strife in Sri Lanka could leave the readers astonished at her courage; the tale of Bimala Majhi, who had to be carried in a bamboo basket by her husband to reach the only Public Health Centre (PHC) in a faraway village in Odisha brings forth a striking reality of the forgotten pockets of our country. Many such powerful narratives in the book focus on the discrete situations of women caught up in insurgencies, wars, riots and natural calamities.

Edited by Pamela Philipose and Aditi Bishnoi, the first half of the book tells the stories of women whose lives have been “interrupted” by disruptive forces, ranging from landmine blasts in the Indian-Pakistan border to Maoist insurgencies in Bijapur and Dantewada. The second half, titled as, “Survival Guides”, compiles reports that confront the notion of powerlessness often associated with women in such conflict areas. The concluding segment brings to light the unsung heroes who have risen from the ruins to make a difference in the lives of people affected by “disruptive developments”.