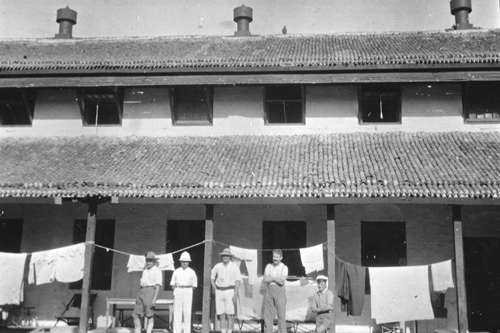 It was on 25 January 1917, in Cairo, right after delegates of the ICRC had finished a camp visit of Ottoman Prisoners of War (POWs), that they received a cable from their headquarters in Geneva. The cable directed them to inspect camps of POWs and civilian internees in the Asian countries of India and Burma. The delegates got boarded a ship and sailed through the Suez Canal to reach Bombay on 12 February 1917.

The arrival of delegates that day marked the beginning of the ICRC’s journey on Indian soil. For the previous three years since August 1914, the world was engulfed in a war tearing apart humanity with brutality and violence. It was during this time of suffering and pain that the ICRC carried out a considerable expansion of its activities. In the Heart of Europe, as the Austrian writer Stefan Zweig penned it, the ICRC also went to war – in the humanitarian field.

The arrival of ICRC delegates Dr F. Blanchod, F. Thormeyer and Emmanuel Schoch was part of broader action taken by the ICRC globally. Restoring contact between people separated by war was one key identified area of focus for the ICRC and as a result, the International Prisoners-of-War Agency was formed on 21 August 1914. And from December 1914, ICRC delegates began obtaining permission from the different belligerent states to visit POW camps, not just to check on conditions of detention, but also to let the prisoners know that they had not been forgotten by the outside world.

The mission in India began with delegates meeting Viscount Chelmsford, Viceroy of India (the head of the British administration in India) in Delhi. In the province of Rajputana, the ICRC delegates visited the first camp in Sumerpur on 3-4 March 1917. The Ottoman POW camp held 3,366 prisoners, predominately Mesopotamian Arabs. The delegates also visited Turkish POWs in a camp at Bellary, and in a depot camp in Calcutta for POWs captured in Mesopotamia, as a transit camp en route to their place of detention in Myanmar.

Explaining the concrete work of the delegates during such camp visits,  Mary Werntz, currently the head of the regional delegation of the ICRC in Delhi, said, “the delegates would dive deep to see if the detainees were treated with dignity. From checking the barrack premises, sleeping, clothing and sanitation facilities, access to exercise and fresh air, medical services, quantity of food received per person, to mapping the application of order and discipline on inmates by the detaining authority. Every detail was observed and noted. Efforts would also be made to ensure that the detainees had the right to practise religion, has access to letters and parcels, and could obtain financial support from their own government.”

Many camps visited by the delegates also housed interned civilians mostly comprised of German and Austrians. Most of them had been in India for several years, engaged in business, managing prosperous commercial firms or enjoying well-paid employment, but as one of the measures enforced by warfare, civilians from certain nationalities had to face confinement. After spending two months visiting the camps across the length and breadth of India, the Swiss delegates left for Burma.

From 1914 until all prisoners had been released in 1923, the ICRC visited 524 camps throughout Europe, Africa and Asia. After each visit, they drew up a report containing their findings and comments that were then sent to the detaining power of the prisoners of war.  By the end of the war, the Agency had transferred about 20 million letters and messages, 1.9 million parcels, and about 18 million Swiss francs in monetary donations to POWs of all affected countries.

Tracking ICRC’s journey in India, Marek Resich, Communication Coordinator of the regional delegation of the ICRC in Delhi, says, “More than 95 years since ICRC’s first mission stepped onto Indian soil, we have continued to offer our services through different political seasons including the bloodshed that followed Indian independence and the India-Pakistan border conflicts. Over the last 30 years, it has been a journey to strengthen our dialogue with India’s institutions and vibrant civil society, addressing humanitarian needs and sharing new perspectives on the future of humanitarian action, in India and beyond.