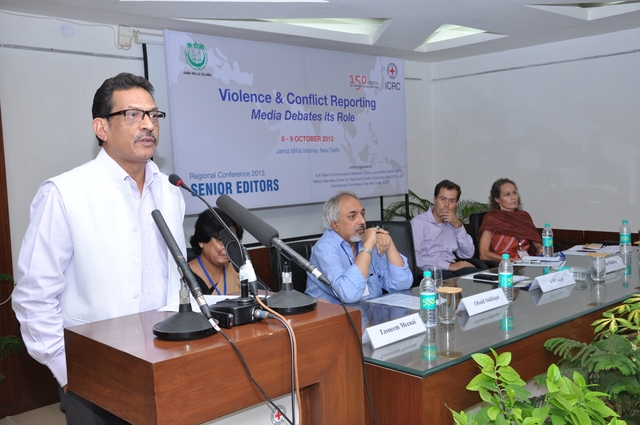 The media of South Asia has an important role to play in covering conflict, violence and the challenges faced by vulnerable groups. At times, reporting on these issues can influence the humanitarian situation on the ground. Bringing together senior editors of media organizations from the region, the ICRC alongwith the AJK Mass Communication Research Centre and the Nelson Mandela Centre for Peace and Conflict Resolution of the Jamia Millia Islamia University hosted the Regional Senior Editors Conference in New Delhi from 8 to 9 October 2013.

More than 20 senior editors from media organizations in South Asia and South-East Asia gathered to advance discussions on challenges of reporting on violence and conflict and share best practices.

“The most important aspect of journalism in the context of conflicts is ethical reporting. There should be proper adherence to journalistic ethics; biases and prejudices should not interfere with ethical reporting,” said Prof. S.M. Sajid, Vice Chancellor of Jamia Millia Islamia, formally inaugurating the two-day conference.

Speaking during the inaugural session Mr Adam Roberts, South Asia Bureau Chief of The Economist, who was also the Guest of Honour said, “Journalists have a strong responsibility of distinguishing between news and propaganda. There needs to be a fine balancing done by the journalist alone.”

The inaugural session was followed by three thematic sessions spread over one and half days where students, academics, diplomats and journalists debated on different dimensions of violence and conflict in relation to the media. “Media do not just report news, they also form opinions – and that, in turn, shapes events,” said Ms Mary Werntz, Head of the Regional Delegation of the ICRC in New Delhi. “It is interesting to discuss with top professionals from South Asia how reporting can help address humanitarian consequences of violence and conflict,” she added.

The first session discussed the importance of doing a balancing act while reporting armed violence or war. Chaired by Ms Pamela Philipose, Director and Editor-in-Chief of Women’s Feature Service (WFS), and with speakers from India, Sri Lanka, Singapore and Afghanistan, the first session created the platform for the following sessions as it touched upon the relations of Media and the Military, the State, Non State Actors and International Organisations, all of which have been topics of debate in conflict reporting. The first session also deliberated on whether journalists continue to be impartial observers in present conflicts. Elaborating on this, Mr Narayan Swamy, Chief News Editor of Indo-Asian News Service pointed out that ‘minimum impartiality’ should be present in the sense that “the opinion of the other side must be in your report.”

The post-lunch session on the first day of the conference debated on issues and challenges of reporting armed violence or war. Moderated by Mr Bharat Bhushan, Senior Editor, the session saw participation of senior editors from Australia, Afghanistan, Sri Lanka, Nepal, Pakistan and Bangladesh. The issues floating across the discussion table ranged from accuracy and verification challenges of social media news in conflict situations to the media’s role in bringing forth post-conflict challenges.

Mr Rahimullah Khan Yusufzai, Resident Editor of The News International, Pakistan while reflecting on challenges faced when reporting from conflict situations said, “Very often journalists get caught between the government pressure and the immense threat from non-state actors. Even kidnapping of journalists is an equally serious problem.” Cautioning about the emerging trends of social media news in conflict situations, Mr Peter Cave, Retired Foreign Affairs Editor of the Australian Broadcasting Corporation noted that the social media is becoming an ideological battlefield and a source of overt and covert propaganda.

The final session mapped the changing media landscape. It threw light on the evolving dynamics of conflict reporting in South Asia while simultaneously emphasising on the role of social media. Speakers from India, Bangladesh, Iran, Nepal, Pakistan, Bhutan and Maldives shared their diverse field experiences. The discussions during the session were dominated by the question of impartiality of media houses.

Speaking on the changing dynamics of conflict reporting in South Asia, Ms Patricia Mukhim, Editor of Shillong Times brought an interesting perspective to the session when she said, “The media is over-reporting violence and what is needed is more of peace reporting. We need peace education syllabi in all journalism courses.” She added, “There needs to be more investment in capacity building. Journalists have least education in conflict and peace reporting.”

Highlighting the role of the New Media which includes social sites, mobile phone etc, Mr Rinzin Wangchuk, Editor of Kuensel Corporation, Bhutan said, “The New Media has helped in national cohesion. National dailies that took a couple of days to reach the southern most areas are easily accessed through the internet.” The conference came to an end with the concluding session where the organisers shared their vote of thanks.

The discussions during and after each session attracted a variety of questions and queries from students of journalism and conflict studies who attended the conference with great enthusiasm. These question and answer sessions provided a vibrant space for lively interactions between the students and senior editors. Over the past few years, the ICRC has cultivated its relationship with the media in South Asia and beyond, hosting similar events in Manila in 2011, Dhaka in 2007 and New Delhi in 2006.