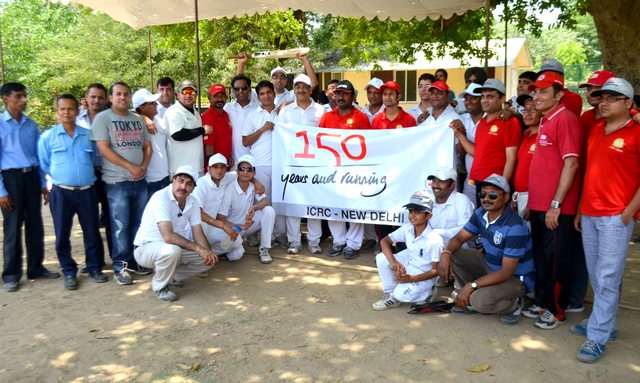 The ICRC and IFRC cricket teams get together for a photo session following a match played between the two teams to mark the Word Red Cross Day celebrations.

The ICRC celebrated World Red Cross day on 8th May across its offices in India, i.e. New Delhi, Jammu, Srinagar and Raipur, with the Red Cross Movement partners – IRCS and the IFRC.

In New Delhi, a 16-over cricket match was organised between the ICRC and IFRC at the Talkatora Cricket Stadium and in true Movement spirit, colleagues played the friendly match braving the heat. At the end of the match, the ICRC Head of Regional Delegation, Mary Werntz and representatives of the Federation congratulated the teams. 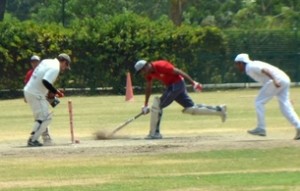 The ICRC also participated in the 8th May event of the J&K Red Cross State ranch where the ICRC’s Head of Jammu and Kashmir office, Jean-Francois Sonnay, emphasised on the collective strength of the Red Cross Movement. Speaking on he occasion, the Chief Guest of the event, Post Master General of J&K, urged he youth to come forward and join the noble cause of serving humanity. Students from various schools and colleges  presented papers on the theme – “150 years of Humanitarian Action”. A rally of Red Cross volunteers was also flagged off by the Chief Guest after the event.

This was followed by another high profile event organised by the Srinagar District Red Cross Committee. The Governor of the State, senior civil and police officials, State Branch staff, students and the ICRC attended the function where the Governor released the Special Cover and My Stamp brought out by the Postal Department exclusively on the Red Cross. The funds from the sale of the cover and the stamp will be given to the Red Cross Movement.

In Raipur, Chhattisgarh, a two-day event marked the occasion, which included a dissemination session for students, volunteers and journalists on ICRC and IRCS activities. Mr. Shekhar Dutt, Governor of Chhattisgarh, presided over the event and unveiled the IRCS.