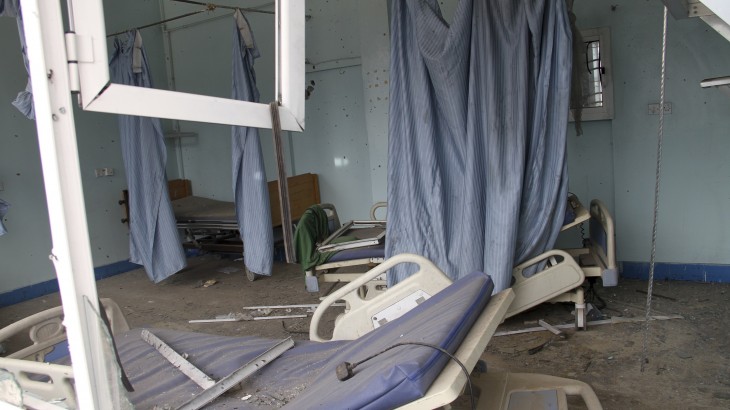 Taiz city, Al-Thawra hospital. The three patients who had been laying in this room were pulled out of their beds when the shelling started. ©ICRC/Wael Al Absi

Geneva (ICRC) – An incident of violence against health-care facilities or personnel has taken place every single week since the passage two years ago of a U.N. Security Council Resolution meant to increase respect for the sanctity of health care.

Just this week, armed men stormed a hospital in the Central African Republic where an International Committee of the Red Cross (ICRC) surgical team operates, threatening patients, medical staff and Red Cross volunteers. An ambulance was stopped and threatened in the street.

The U.N. Security Council resolution passed with overwhelming support, an indication the world believes that people, especially in areas of conflict, must be able to safely seek medical care. Sadly, from May 2016 to today, the ICRC has registered in 16 countries alone over 1,200 incidents of violence against health-care facilities or personnel.

In Afghanistan, for example, attacks against health workers and the use or destruction of health-care facilities by arms carriers has cut off thousands if not millions of people from medical care. The attacks health personnel face include threats, kidnappings, and killings.

“Attacks against health facilities and personnel are a double tragedy,” said ICRC President Peter Maurer. “First, such attacks wound and maim people seeking and providing health care. But they also deprive an uncountable number of people from receiving aid in the future, crippling the hopes of recovery for people in desperate need.”

The passage on May 3, 2016 of UNSC Resolution 2286 was a strong step by the international community to address violent attacks on health care, but commitments to prevent and mitigate this violence must be followed by action.

The ICRC urges that these steps take place in conflict zones:

2) The lifting of any blockade that prevents the delivery of necessary medical items and the evacuation of sick and wounded people.

3) Investigations into incidents of violence against health care and accountability for attacks that violate international humanitarian law.

The destruction of health infrastructure and the disruption of health services have been particularly disturbing in conflicts in the Middle East. More than half of Syria’s public hospitals and health-care centres are closed or only partially functioning. Some of them have been hit by multiple air strikes. The provision of medical supplies in certain areas of the country as well as the evacuation of the wounded and sick have been consistently obstructed.

In Iraq, the destruction of civilian infrastructure in areas affected by the most recent hostilities has been massive. In Salah al-Din more than a third of health centres are damaged or destroyed. In Yemen, only 45% of the country’s health infrastructure was functioning at the end of 2017, and most did not have enough medical supplies.

“Even wars have rules,” Maurer said. “The wounded and sick must be protected in all circumstances. Violence that deprives them of access to health care violates international humanitarian law, and, ultimately, it makes us all a little less human.”