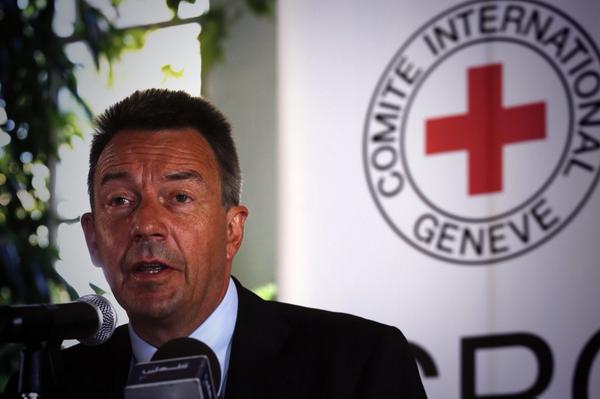 Peter Maurer, president of the International Committee of the Red Cross (ICRC), visited Gaza, Israel and the West Bank from 4 to 7 August to witness first-hand the impact of the recent wave of hostilities on the civilians there.

Mr Maurer met many people whose lives were shattered by the conflict. He went to some of the areas hardest hit, where he saw for himself the massive devastation caused by the fighting. He met with Israeli Prime Minister Benjamin Netanyahu, President Reuven Rivlin, Minister of Justice Tzipi Livni, Minister of Defense Moshe Ya’alon, Palestinian President Mahmoud Abbas and Hamas officials. He also met with the heads of the Palestine Red Crescent Society and the Magen David Adom to discuss their emergency response activities during the conflict.

“This conflict has taken an unacceptable toll on the civilian population,” said Mr Maurer. “We have called for the killing and the destruction to stop in the name of humanity. Protecting civilians must be the overriding concern. The parties to the conflict have obligations under the laws of war. We have witnessed serious discrepancies between those obligations and the reality on the ground. We are determined to engage with the parties in an effort to stop this happening again.”

In Gaza, more than 1,900 people were killed and some 10,000 wounded in 28 days of intense hostilities. At least 400,000 people were displaced and more than 9,000 homes rendered uninhabitable. “The human cost of the conflict has left many of us stunned,” said the ICRC president. “Our hearts go out to the people who are most vulnerable – children, the elderly, the sick and the wounded – for it is they who have paid the highest price.”

“International humanitarian law is meant to strike a balance between military necessity and humanitarian considerations,” he said. “Having seen the destruction on the ground, and met the victims of the hostilities, I can affirm first-hand that this balance has not been respected. This only underlines the need for the parties to absolutely abide by the law, and for the international community to take all possible measures to ensure that they do so.”

Mr Maurer also spoke of the need for frank dialogue with political leaders on the immediate and the future humanitarian needs of those most severely affected. “I restate the ICRC’s solidarity with all affected communities, and I especially want to thank all members of the International Red Cross and Red Crescent Movement, whose work has helped ease the suffering. I have great admiration for the work of Palestine Red Crescent Society staff and volunteers who risked their lives to bring emergency medical help to people in dire need.”

The parties to the conflict and the international community bear the collective responsibility of creating an environment conducive to sustainable humanitarian efforts where they are needed most. The past cannot be allowed to repeat itself. The ICRC is committed to helping decimated communities recover, but that recovery requires tangible changes: improvements for Gazans in accordance with international humanitarian law, and greater respect for humanitarian work and workers under all circumstances.