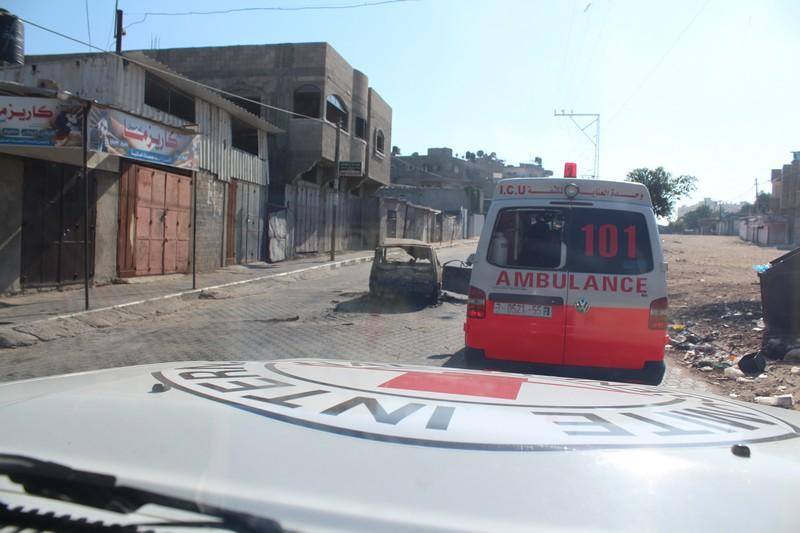 An ICRC delegate describes his experience during a humanitarian mission to Shujaia, Gaza:

Last week, I led an ICRC/PRCS convoy into the Shujaia neighbourhood. The convoy included 3 ICRC vehicles, 5 PRCS ambulances, a civil defence bulldozer and a large digger machine on a flatbed truck.

We managed to enter the area, proceeding eventually as far east as the Al Tawfiq mosque, a hotly contested area. Until that point, the security was quite good, the main problem being rubble and other physical obstacles, which required the bulldozer to clear.

We managed to search Al Baghdad and Nazzaz streets, and several side streets, advancing E-SE nearly as far as the Al Tawfiq Mosque. We were eventually held up by lots of rubble and downed power lines close to the contested area, and it took an hour to clear the way so we could continue along our planned route.

Unfortunately, by the time we were ready to proceed, shooting and shells started landing in the distance. We then received warning shots, which became more persistent and directed closer to our location, which required us to pull back. We clearly had outstayed our welcome – likely due to the presence of a large group of civilians and a contingent of journalists that had followed us into the area.

We managed to collect four wounded and a family of 11 civilians who were trapped in the area and discovered several dead bodies along the way, buried in rubble. At the furthest point there were an unknown number of bodies buried in the remains of two large buildings that were completely destroyed.

We then heard of two wounded men on a side street, close to the fighting and tried to access the side street on foot. Unfortunately, we had to pull back, after three tries, for security reasons since there was intense fighting in the area just beyond. We were also given a clear message not to proceed further, to pull back via fire directed in our direction.

In the end we could not access the wounded and efforts to stop to recover bodies on the way out could not be completed; we were shepherded out of the area with gunfire following us, to help us on our way.

As we were leaving Shujaia, two of our vehicles were attacked by an angry mob, frustrated that we were leaving and did not do more or go further into the area. I suspect it was also anger at the situation generally and grief over the loss of loved ones. Large rocks were thrown and two vehicles damaged; one man smashed the side window of one land cruiser with a large piece of wood, slightly injuring a PRCS volunteer who was travelling in it. This type of attack, from the very people we are trying to assist, is very worrying but it reflects the growing anger this conflict has created.

CNN’s Ben Wedeman was with them and brings this story: