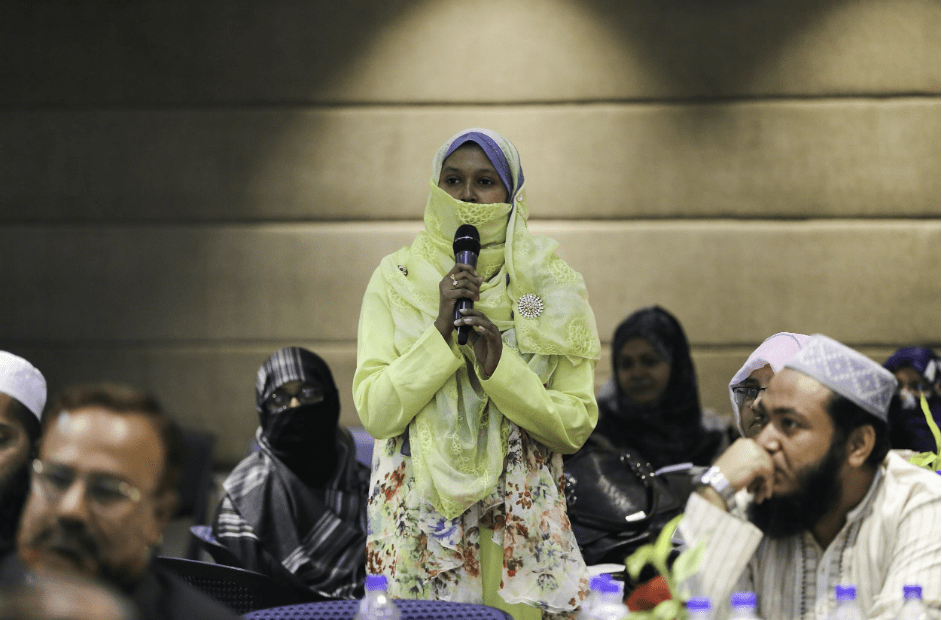 Influencing the behavior of armed forces and armed groups to comply with the norms of international humanitarian law is one of the cornerstones of the work of the International Committee of the Red Cross (ICRC). Success in such endeavours presupposes a solid understanding of the internal beliefs and workings of armed forces and armed groups and the external sources of influence upon them. Recent research in this area has informed the ICRC’s knowledge and approaches to building trust and mutual understanding with armed groups and communities, which is a pre-requisite for safe access to those in need of humanitarian assistance and meaningful discussions with those carrying weapons about their behavior.

Today two-thirds of the ICRC’s operations occur in Muslim contexts. This article co-authored by Ahmed Al-Dawoody and Fiona Terry (and originally published on OpinioJuris) explores the interlinkages between research, policy and practice in the ICRC’s work to gain greater respect for humanitarian norms, with a particular focus on the Muslim world.

The Role of Research

Two research studies have been particularly influential in guiding the ICRC’s approaches to promote the adoption of IHL and other humanitarian norms within armed forces and groups: the 2004 The Roots of Behaviour in War: Understanding and Preventing IHL Violations study and the 2018 The Roots of Restraint in War study. The former explored psycho-social influences on the behaviour of individual soldiers and fighters, the findings from which prompted a change in approach from a focus on disseminating the law, to promoting its incorporation into the internal doctrine, training and sanction mechanisms of armed forces and groups. A decade later, The Roots of Restraint in War study sought to assess the effectiveness of this ‘integration’ approach in the vertically-structured armed forces to which it was applicable, and to broaden our understanding of external sources of influence over the rapidly growing number of decentralized non-State armed groups emerging in theatres of conflict around the world.

Many of the findings of The Roots of Restraint in War study are winding their way into the reflection, policies and operational practices of ICRC staff across the globe. The one we wish to highlight here is the recommendation to find traction for adherence to the norms of IHL through reference to local beliefs, traditions, customs and practices that encapsulate similar norms of restraint, or help to convey the sense of such restraint through analogy with familiar customs. The ICRC had, of course, been engaging with religious and legal frameworks to find parallels with IHL long before these two studies were launched, but the proliferation of armed groups and search for ways to influence their behaviour has necessitated the mainstreaming of what was previously a specialised function, and the research has helped in that sense. Understanding armed groups and engaging with them on their beliefs, practices, norms of restraint and the humanitarian consequences of their actions is increasingly a ‘whole-of-ICRC’ activity. What does this look like in our work in the Muslim world?

Research and experts’ discussions at the ICRC have explored the parallels between Islamic Law and IHL. Islamic law (sharia) is one of the oldest legal systems in existence today and has developed detailed rules regulating warfare that go back to the seventh century. Almost one fourth of the world’s population today are Muslims. As Emilia Justyna Powell explains in her book, this amounts to  hundreds of millions of people who are “ethically, morally, doctrinally, or politically committed to sharia.” (at 1). Hence understanding the commonalities between the two legal systems is imperative to our work around the world.

Both IHL and the Islamic law of armed conflict share the same underlying core objective: preventing and alleviating the suffering of victims of armed conflicts. Both legal systems also share the same fundamental challenge in contemporary conflicts: compliance with the law! In Islamic law, compliance is in some cases a “self-imposed” system. In the words of Ahmed Zaki Yamani, scholar of Islamic law and ex Saudi Arabia Minister of Oil and Mineral Resources: “the rule in Islam is that a combatant is held personally responsible for compliance with the provisions of [Islamic] humanitarian international law, for obedience is owed to no man who orders another to commit a sin.” (at 215) Since Islamic law experts agree that IHL and Islamic law share the same objective, then using Islamic law when relevant can contribute to promoting restraint in those carrying weapons. Below are three recent examples of areas where knowledge of Islamic law and customs have played an important role in generating respect for parallel humanitarian norms.

a. Proper and dignified management of the dead

Knowledge of the fundamental rules of Islamic burials and coordination with Islamic law experts has proved extremely important during the COVID pandemic. The ICRC has been at the forefront of helping forensics specialists and community leaders meet the challenges of ensuring the safe and dignified disposal of dead bodies. (Ahmed Al-Dawoody, pp. 759–784) There has been exemplary cooperation between Muslim jurists and specialized medical and forensic experts. Islamic guiding manuals and fatwas issued by Sunni and Shii religious authorities, that were based on deliberations between Islamic jurists and specialized medical and forensic experts, have contributed to saving lives and mitigating the effects of the COVID-19 pandemic in Muslim contexts. This work has also helped to increase the acceptance of the ICRC as a purely humanitarian actor in contexts such as Gaza and Nigeria.

b. Protection of children

Children often pay the heaviest price for violations of IHL in armed conflicts. Academic research and Islamic jurists are playing an important role in providing humanitarians with arguments that can be invoked to prevent, for example, the recruitment and use of children to fight. This is explicitly forbidden under Islamic Law. Referencing Islamic principles can also help to persuade local authorities to avoid separating children from their families and promote their access to education. (Ahmed Al-Dawoody and Vanessa Murphy, pp. 551–573)

The third example of the importance of understanding local legal and ethical frameworks takes us one step further from invoking the norms into having them actively applied to our humanitarian work. Aid workers have been targeted by violence in several Muslim contexts. Yet Islamic law guarantees protection to humanitarian workers: amān (safe passage, quarter) is guaranteed to foreign nationals who ask permission to enter Islamic territories as long as they do not engage in hostilities or espionage (national aid workers are protected as citizens). In fact, these protections pre-date Islamic Arab culture, and were enshrined and described in great detail in the classical Islamic law books by Muslim jurists. (Ahmed Al-Dawoody, pp. 129-136) Diplomats are also automatically guaranteed protection and immunities because of the very nature of their job. (M. Cherif Bassiouni, pp. 609-633).

Protections provided under the amān system were put into practice in the security guarantees bestowed on the ICRC by the Taliban in Afghanistan. As Reuters reported in October 2018, the Taliban officials agreed to grant security guarantee to the ICRC following a meeting in Qatar, and “calls on all mujahideen to grant access…and provide security for the personnel and equipment of this organization [the ICRC].”

Combining knowledge of local beliefs, culture and customs with humanitarian assistance activities can also help to promote compliance of the behaviour of soldiers and fighters to humanitarian norms. One example of how to make the rules of war resonate in local contexts, documented in the Roots of Restraint study, has attracted particular interest among those seeking to influence behaviour. It is from South Sudan during a first-aid training course run by the ICRC. Participating in the course were some young Nuer warriors who were proud of their traditional sport of wrestling. The ICRC armed forces delegate who was present engaged them in a passionate discussion over whether there were rules to the wrestling matches, and if so, what they were. At the end of the explanation he sought more clarity, asking the warrior whether he could, say, ‘challenge that old man sitting under the tree to a match’. The warrior shook his head in disbelief: ‘of course not, he is frail and no match for me’. Ditto with a young boy in the crowd: ‘it would not be a fair fight’. And so through making an analogy between what is a fair fight in wrestling with that of armed conflict, and the need to respect the rules, the delegate was able to transmit humanitarian norms to the group.

Conclusion Alleviating human suffering and addressing the serious humanitarian consequences of armed conflicts necessitates a transversal approach where both research and humanitarian actions are mutually informed by each other. To capture the complex and evolving nature of armed conflict, research should be focused on field realities and humanitarian action and policy should be guided by specialized multidisciplinary research and expertise. Formal and informal norms specific to particular groups or contexts that might influence the behaviour of soldiers and fighters towards restraint ought to be invoked. This obliges humanitarian actors to dig deeper into their understanding of local particularities, to show integrity and genuine modesty to listen and learn from both those carrying weapons and those affected by armed conflict.

[Ahmed Al-Dawoody is the legal adviser for Islamic law and jurisprudence at the ICRC. He also teaches at the Geneva Academy of International Humanitarian Law and Human Rights in Geneva, Switzerland, a course on the Islamic law of armed conflict. Fiona Terry heads the ICRC’s Centre for Operational Research and Experience, which was created in the wake of the Roots of Restraint in War study of which Dr Terry was co-author. She has over two decades of experience in humanitarian operations in different parts of the world including Iraq, Somalia, Rwanda, Liberia, Sudan, Myanmar, Nepal and Afghanistan, principally with Médecins Sans Frontières (MSF) and the ICRC.]