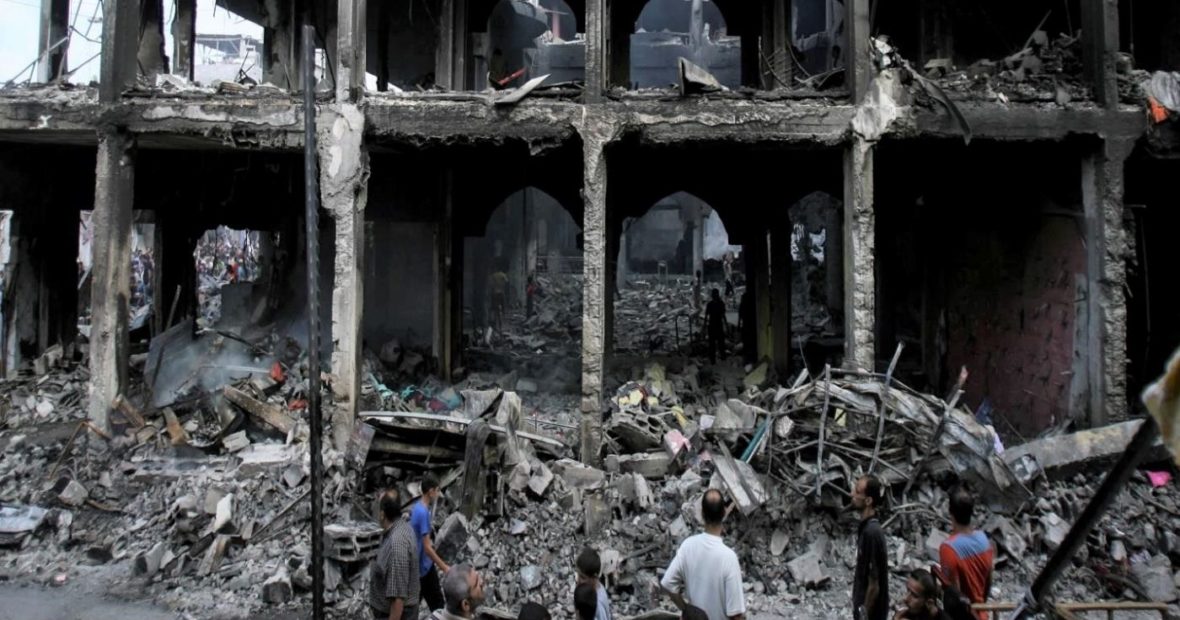 On 30th October 2019, the Islamic University of Gaza’s Faculty of Law and Sharia conducted a study day with the ICRC on urban warfare and precautions from the perspective of Sharia and IHL. While the theme of urban warfare was tackled from a global perspective, the study day aimed at involving academic circles from Gaza to get their views and create an environment of mutual understanding, analysis and action. Indeed, the urbanization of warfare is growing and fighting too often takes place in cities. Fifty million people around the world are currently bearing the brunt of such hostilities. The obligation to take all feasible precautions plays a central role in protecting civilians in such conflicts and raises a series of legal and operational questions.

The event gathered various participants including academics from the Faculty of Law and Sharia of IUG, other universities in Gaza, Sudan and representatives from the ICRC. The academic participants discussed legal requirements (under IHL and Sharia law), including the principle of distinction, the obligation to take all feasible precautions, as well as the dilemmas and challenges in operationalizing this obligation for States and non-State armed groups; the challenges inherent to urban warfare from an operational and humanitarian perspective; as well as issues of accountability.

The discussion that was facilitated by both IUG and the ICRC paved the way for the academic participants to have a thorough discussion from Islamic Sharia and IHL perspectives on the commonalities, challenges and obligations.

1.1 Distinction under Islamic Sharia and IHL:
The roots of Islamic Sharia played a prominent role in highlighting the principle of distinction between combatants/fighters and civilians, civilian objects and military objectives. This principle was the result of accumulating historical experiences that evolved from the simple practices and features known by ancient peoples. Islamic roots brought the principle of distinction at the legislative and practical levels.

a. The principle of distinction between combatants/fighters and civilians, civilian objects and military objectives in armed conflicts is very important, and one of the most significant achievements to regulate armed conflicts. From a Sharia perspective, the principle of distinction is viewed as having a preventing role in limiting the humanitarian cost of armed conflicts, as it works to rationalize the effects of armed conflicts and limit them to the minimum. The academic participants acknowledged the consistency between Sharia and IHL when it comes to the general principle of distinction and the determination of who is a combatant or civilian, and what constitutes a civilian object and what is a military objective, with references to Article 4 of the Third Geneva Convention and Article 43 of the First Additional Protocol of 1977 (API) for combatant and Prisoner of war status, to Article 48 and 50 of API with regard to the obligation to distinguish and the determination of who is to be considered a civilian and protected from attack as well as Article 52 AP I with regard to the protection of civilian objects against attacks.

b. Considering the loss of protection of civilians against attack, provided for under IHL when civilians take a direct part in hostilities, Islamic Sharia provides a clear interpretation of direct participation in hostilities. In Islamic Sharia, if a civilian takes up a weapon with the purpose of fighting and he engaged in hostilities, then this is the criterion that will deprive him/her from protection against attack. The ICRC defines three constitutive elements of direct participation in hostilities. Civilians lose protection against direct attack for the duration of each specific act amounting to direct participation in hostilities. The three cumulative criteria are: (1) The act must be likely to adversely affect the military operations or military capacity of a party to an armed conflict or, alternatively, to inflict death, injury, or destruction on persons or objects protected against direct attack (threshold of harm), and (2) there must be a direct causal link between the act and the harm likely to result either from that act, or from a coordinated military operation of which that act constitutes an integral part (direct causation), and (3) the act must be specifically designed to directly cause the required threshold of harm in support of a party to the conflict and to the detriment of another (belligerent nexus).

c. Elaborating on the previous point of who is protected against attack and who is not, Islam prohibits attacks against those who do not carry a weapon including women, children, elderly, sick and religious personnel and those who do not participate in a war against the Muslims. Subjecting civilians and civilian objects to direct attacks is a malpractice in all times and places.

e. Continuing this point and getting to the enforcement/punishment of violations of the above stated principle, in Islamic Sharia those who violate the provisions of combat in Islam are sinners and disobedient to Allah, Almighty, regardless of their official or social positions and are liable to punishment, if not in this world, in the hereafter.

1.2 Challenges of Urban Warfare and Importance of the Principle of Precaution:
The academic participants and the ICRC agreed on the main challenges posed by urban warfare and that the respect of the principle of precaution was crucial.

a. Increasingly, fighting takes place in cities, and this creates a number of specific challenges for parties to the conflict, especially when it comes to the principle of precaution.

b. Urban warfare causes severe damage to urban infrastructure, essential civilian services, human and national heritage, archeology and civilizations. Civilians are badly affected and are most of the times subjected to forced displacement.

c. Precautions are to be understood as including precautions in attack and precautions against the effect of the attack as reflected in articles 57 and 58 Additional Protocol I of 1977. These articles reflect international customary law (Rules 15 and 22) which bind all parties to the conflict.

d. IHL requires the parties to conflict to take a range of precautions in attack and against the effects of attacks to protect civilians and civilian objects. All feasible precautions must be taken to avoid or at least minimize incidental civilian harm. Feasible precautions are those that are possible in practice, taking into account all of the circumstances ruling at the time, including humanitarian and military considerations.

f. Precautions are applied in Islamic Sharia through the provisions in the Holy Quran and the Prophet’s Sunnah as well as Islamic jurisprudence.

a. The academic participants stressed that the rules of IHL must be respected by all parties to the conflict in the conduct of hostilities whether regular armies or non-State armed groups.

b. National and international instances including the International Criminal Court play an important role in enhancing respect of the law and limit the grave violations.

c. The harmonization of national legislations – in case of accession to Geneva conventions, their additional Protocols and the Rome Statute, is key in the enforcement of IHL.

b. The ICRC has an important role in monitoring the application of the IHL and this role is defined by the will of the parties of the conflicts.

1. The necessity of the strict application of the rules of IHL and the principles of Islamic Sharia that require in all times the distinction between combatants/fighters and civilians.

2. Emphasis on the prohibition of indiscriminate attacks as well as the means and methods of warfare shall respect this principle.

3. The necessity of disseminating the culture of IHL and other relevant Islamic Sharia principles through legal centers and the faculties of law and Sharia.

4. The necessity of all institutions concerned at the national level to contribute to the dissemination and teaching the principle of precautions, especially to the parties to conflict such as armed groups and national liberation movements.

6. Civilians and civilian objects should be protected against attacks. Combatants/fighters should also be warned of the consequences of violating IHL.

7. The need to support and adopt urban services that are resilient during urban warfare in order to limit the impact of armed conflicts on urban development.

8. The need to adopt an urban agenda that places civilians and vulnerable groups in the priorities of urban planning.

10. To integrate the principles of precaution, distinction and proportionality within the military regulations of regular forces and forces of non-State armed group.

11. States must translate into their national laws their obligations to repress and prosecute serious violations of IHL.

12. Coordination of all efforts among the members and communities of the international law in order to optimize the application of IHL.