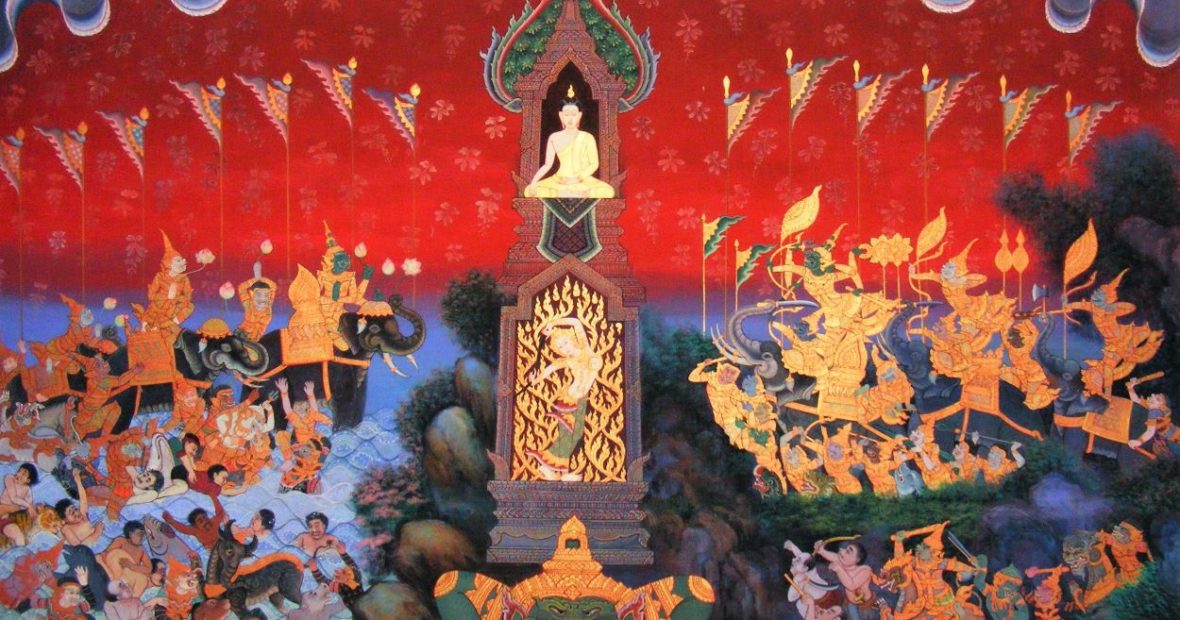 Conference Announcement and Call for Papers

The International Committee of the Red Cross (ICRC) in collaboration with Chiang Mai University (CMU) and Shan State Buddhist University (SSBU) is launching a Call for Papers on the theme of “Reducing Suffering During Armed Conflict – The Interface between Buddhism and International Humanitarian Law”.

The core of international humanitarian law (IHL) – also known as “the law of war” or “the law of armed conflict”– is formed by the Geneva Conventions and their Additional Protocols. Its purpose is to minimize suffering during armed conflict by protecting those who do not – or no longer – participate directly in hostilities, and by regulating the means and methods of warfare.

Buddhism has grappled with the reality of war throughout its long history. But what guidance does Buddhism provide to those caught up in the midst of hostilities, and how do Buddhism and IHL compare in this respect? It is timely and relevant to explore these two distinct bodies of ethics and legal traditions from inter-disciplinary perspectives.

This conference will explore correspondences between Buddhism and IHL and encourage a constructive dialogue and exchange between the two domains. The conference will act as a springboard to understanding how Buddhism can contribute to regulating armed conflict, and what it offers in terms of guidance on the conduct of, and behaviour during, war for Buddhist monks and lay persons – the latter including government and military personnel, non-State armed groups and civilians. The conference is concerned with the conduct of armed conflict, and not with the reasons and justifications for it, which fall outside the remit of IHL.

The conference follows on from the first international conference on Buddhism and IHL (https://www.icrc.org/en/document/reducing-suffering-during-conflict-interface-between-buddhism-and-international) arranged by the ICRC and its partners in Dambulla, Sri Lanka, in September 2019, many of the papers from which have since been published, and are available for contributors to consult.

In addition to exploring correspondences between IHL and Buddhist principles, and also therefore the field of military ethics, the conference will investigate psychological Buddhist resources to improve the conduct of war. It will also explore how Buddhist combatants and communities understand IHL, and where it might align with Buddhist doctrines and practices, including the fields of Buddhist ethics and Buddhist law. Similarly, how Buddhists’ experience of armed conflict might be drawn upon to better promote IHL and Buddhist principles, thereby improving conduct of hostilities on the ground.

The organizers look forward to receiving submissions from researchers and professionals of all relevant disciplines. In addition to Buddhist and legal scholars and researchers, for example, contributions from professionals and other interested people are also strongly encouraged, including active or former military or security personnel, humanitarians, government and NGO workers, for example.

Research topics should make a direct connection to the rules of war (IHL or jus in bello), military ethics and armed conflict-related issues. Please note that contributions on the reasons and justifications for war, conflict prevention, peacekeeping, mediation, conflict resolution, post-conflict reconciliation and identity politics fall outside the remit of Buddhism as it relates to IHL, and will not be accepted. Contributors are strongly encouraged to familiarize themselves first with the newly emerging research on Buddhism and IHL on the ICRC Religion and Humanitarian Principles website: https://blogs.icrc.org/religion-humanitarianprinciples/category/buddhist-circles/. More information on the Buddhism and IHL project, and videos from the Dambulla conference, can also be found here: https://blogs.icrc.org/religion-humanitarianprinciples/project-on-the-interface-between-buddhism-and-ihl/.

Submissions must be of concrete relevance to at least one of the following questions:

Relevant themes and topics from the IHL and military perspectives include, for example:

Relevant topic dimensions from the Buddhist perspective include for example:

The organizers look forward to receiving contributions from researchers and professionals of all relevant disciplines. In addition to Buddhist and legal scholars, for example, contributions are also encouraged from active or former military personnel, humanitarians or any other relevant field. Besides strictly academic papers, the organizers are also eager to facilitate submissions with a more practical focus and can assist in the process of further refining those for academic publication. Concepts for more practical panel discussions and interactive sessions can also be discussed.

Submissions are accepted in English, Thai and other major Southeast Asian language, such as Burmese. Any high-quality research that has not been previously published and is not under review for another conference or journal is welcome.

To contribute you can either:

Inquiries, proposals or already developed articles (including a brief CV/personal introduction) may be sent by email to: glob@icrc.org

Presentations at the conference will last for about 15-20 minutes, followed by a short period for questions and discussions. Selected papers from the conference will be published in reputed academic journals and other prestigious publication outlets, with the entire process being facilitated through the conference organizers.

The working languages for the conference will be English and Thai, although presentations in other languages, such as in Burmese, can also be accommodated. Simultaneous translation Thai-English, English-Thai will be arranged by the organizers throughout the conference.

Accommodation will be provided for all accepted participants and the organizers will provide travel allowances for selected participants who have no academic affiliation or are unable to cover their travel expenses. Note that submissions from Asia might be prioritized for physical attendance at the conference.

The ICRC is an impartial, neutral and independent organization whose exclusively humanitarian mission is to protect the lives and dignity of victims of armed conflict and other situations of violence and to provide them with assistance. The ICRC also endeavors to reduce suffering by promoting and strengthening humanitarian law and universal humanitarian principles.

International Humanitarian Law (IHL) is a set of rules that seek to limit the effects of armed conflict. It protects the lives and dignity of persons who do not, or no longer, participate in hostilities, and imposes limits on the means and methods of warfare. The core of IHL is comprised of the Geneva Conventions of 1949, which have achieved universal ratification, and their Additional Protocols.

The principles of international Humanitarian Law (IHL) are based on humanitarian principles that are ultimately rooted in the world’s religious traditions. The role of religious scholars in promoting common humanitarian principles is therefore crucial. Since the International Committee of the Red Cross (ICRC) has a mandate to promote IHL, it has long reached out to academics and religious scholars to explore correspondences between IHL and other traditions, the aim being to learn from each other and encourage debate on key issues. While there is a great deal of common ground, the differences between IHL and various religious traditions are sometimes as important as the similarities, and offer insights into how IHL might be further developed and improved.

IHL strikes a careful balance between humanitarian concerns and the military requirements of States and non-State parties to armed conflict. It addresses a broad range of issues, including: protection for wounded and sick soldiers; treatment of prisoners of war and other persons detained in connection with an armed conflict; protection for the civilian population and civilian objects; and restrictions on the use of certain weapons (such as biological and chemical weapons and anti-personnel mines) and methods of warfare. As a general rule, IHL prohibits means and methods of warfare that cause superfluous injury or unnecessary suffering, including those that disrupt livelihoods and cause severe damage to the natural environment.

IHL is part of international law – the body of rules governing relations between States made up primarily of treaties or conventions, customary rules and general principles of law. Distinction must be made between IHL, which regulates the conduct of parties engaged in an armed conflict (jus in bello), and another part of international law set out in the Charter of the United Nations, that regulates whether a State may rightfully resort to armed force against another State (jus ad bellum). Thus, IHL applies only during armed conflict and does not concern itself with justifications for war, conflict prevention, peacebuilding, conflict resolution or reconciliation.

Please find an exploratory article on Buddhism and IHL here (which we recommend to read for additional background information and inspiration): https://www.tandfonline.com/doi/full/10.1080/14639947.2021.1976016

A selection of publications that the project has been generating thus far can be found here (many of them are part of a forthcoming special double issue of Contemporary Buddhism, and will be later published as a volume by Routledge): https://blogs.icrc.org/religion-humanitarianprinciples/category/buddhist-circles/

For more information on IHL: