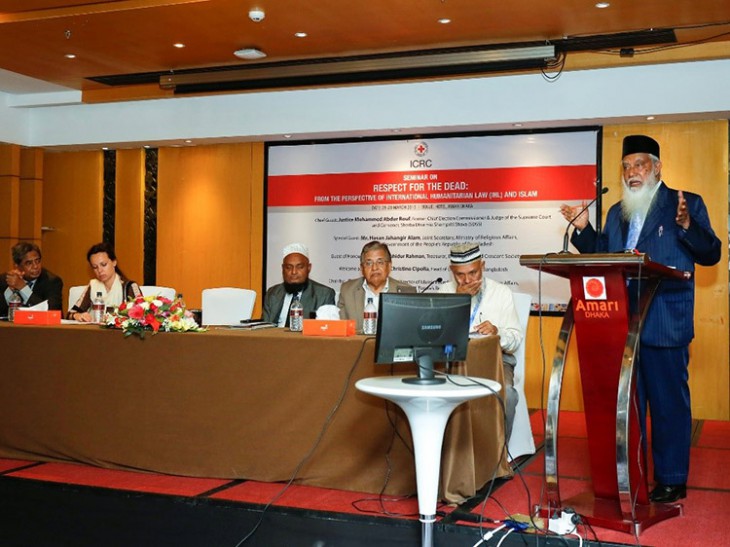 On 28-29 March 2015, the International Committee of the Red Cross (ICRC) in Dhaka organized a seminar of more than 100 Islamic law experts and academics on respect for the dead from the perspective of international humanitarian law (IHL) and Islam.

Based on an article on the same subject, authored by two Bangladeshi scholars Mohammad Azharul Islam and Maulana Obaid Ullah Hamzah, the two-day seminar highlighted the rules and provisions of IHL, Qur’anic verses and Prophetic teachings that value the dignity of a deceased person. Participants discussed and critically analysed topics related to human dignity, respect for the dead and humanitarian principles.

In Bangladesh, natural/man-made disasters as well as politically motivated violence leave families of those missing and deceased in uncertainty and anxiety. Dignified and proper management of those found dead is fundamental to their families.

Thanking the ICRC for initiating such important discussions, Chief Guest former Chief Election Commissioner and Justice Mohammad Abdur Rouf said: “every religion promotes respect for a living person as well as for the dead. Nothing inhuman should be inflicted upon a deceased person; the burial should be undertaken with utmost respect. IHL reflects the same principles. Both Islam and IHL emphasize the respect of human dignity. I am confident that this seminar will generate interesting discussions and debates”.

Ms Christine Cipolla, Head of the ICRC Delegation in Bangladesh, said: “this initiative, first of its kind, aims to improve the protection of human dignity in armed conflict and other situations of violence. The seminar, as a learning platform for both experts of IHL and experts of Islamic law, gives the opportunity to discuss rules meant to alleviate the suffering of victims in humanitarian crisis.”

Since 2011 the ICRC has been working with first responders like the Bangladesh Red Crescent Society and stakeholders such as Anjuman Mofidul Islam, a Bangladeshi Welfare Organization, to highlight the issue of proper management of the dead through trainings and sensitization workshops. In addition, recently the ICRC organized a roundtable on Islam and IHL in collaboration with the Islamic Foundation Bangladesh.