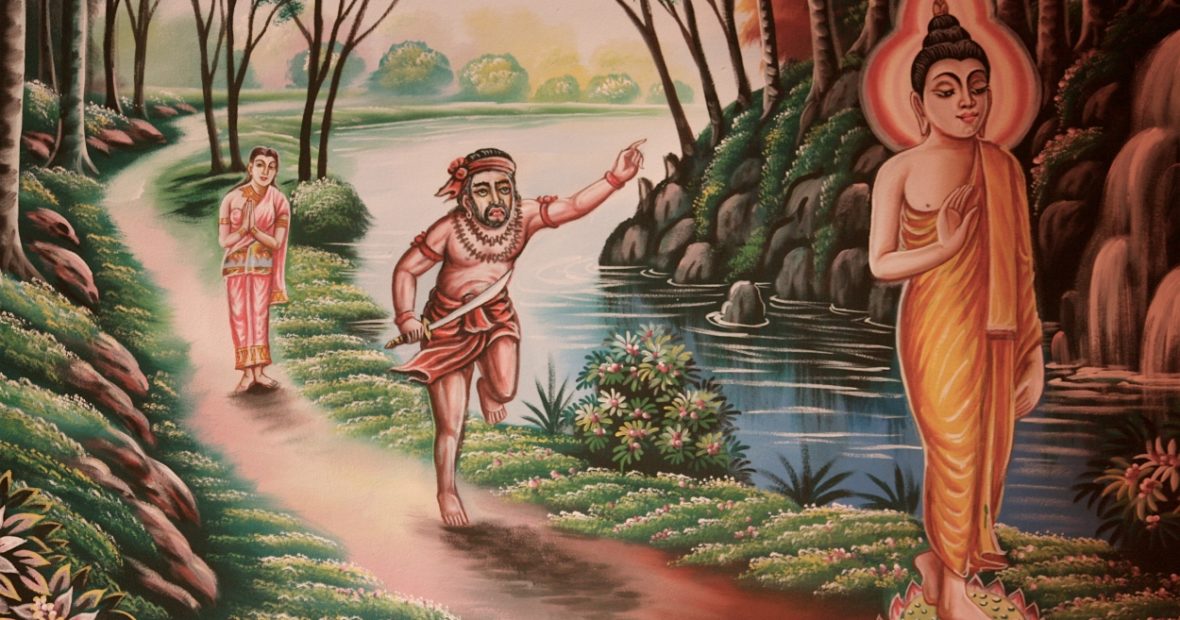 The Angulimala Sutta is a riveting tale from the Buddhist scriptures of a blood-thirsty murderer who lived during the time that the Buddha walked the earth. Terrorizing the realm of King Pasenadi, Angulimala was known for the garland of fingers that he severed from his victims and wore around his neck. “Brutal, bloody-handed, devoted to killing & slaying, showing no mercy to living beings, He turned villages into non-villages, towns into non-towns, settled countryside into unsettled countryside.”

Local farmers, shepherds, and cowherds warned the Buddha that groups of even ten, twenty, thirty, and forty men had been ambushed and killed by Angulimala. They urged the Buddha to turn back, but he did not. Resolutely, calmly, the Buddha walked in the direction of the killer’s lair.

Angulimala saw the lone monk pass by and gleefully determined to kill him. Yet as he ran toward the Buddha, the Buddha “willed a feat of psychic power such that Angulimala, though running with all his might, could not catch up with the Blessed One walking at normal pace.” Amazed by this display of power, Angulimala called out, “Stop, contemplative! Stop!”

The Buddha replied, “I have stopped, Angulimala. You stop.”

“While walking, contemplative,
you say, ‘I have stopped.’
But when I have stopped
you say I haven’t.
I ask you the meaning of this:
How have you stopped?
How haven’t I?”

“I have stopped, Angulimala,
once & for all,
having cast off violence
toward all living beings.
You, though,
are unrestrained toward beings.
That’s how I’ve stopped
and you haven’t.”

Moved by the Buddha’s words, Angulimala determined to abandon violence. He hurled his weapons off a cliff and requested ordination from the Buddha on the spot. The Buddha granted it, and Angulimala joined the community of those who have gone forth with saffron robes and shaven heads.

Angulimala can be read as the personification of brutal violence, indiscriminate and unrestrained by any concern for living beings. This sutta illustrates the potential of the Buddhist teachings to curtail humanity’s most horrific violent impulses and to transform even the most depraved of individuals into agents of non-violence.

Even as Angulimala joins the Buddha’s community of bhikkhus, a crowd of local villagers travel to King Pasenadi’s palace to plea for protection from Angulimala. They detail the horrors that Angulimala has committed and ask the king to “stamp him out!” The king, eager to protect his people, gathers an army of 500 and arrives at the gates of the monastery where Angulimala is known to be staying.

King Pasenadi respectfully greets the Buddha and explains why he has come. The Buddha replies,

“Great king, suppose you were to see Angulimala with his hair & beard shaved off, wearing the ochre robe, having gone forth from the home life into homelessness, refraining from killing living beings, refraining from taking what is not given, refraining from telling lies, living the holy life on one meal a day, virtuous & of fine character: what would you do to him?”

“We would bow down to him, lord, or rise up to greet him, or offer him a seat, or offer him robes, almsfood, lodgings, or medicinal requisites for curing illness; or we would arrange a lawful guard, protection, & defense. But how could there be such virtue & restraint in an unvirtuous, evil character?”

Even though the king finds it almost impossible to believe that Angulimala could have changed his ways, he witnesses Angulimala dressed as a monk, confirms his identity by asking his parents’ clan names, and accepts that the impossible has indeed come to pass. King Prasenadi offers to support Angulimala with all the requisites of the contemplative life.

When the Buddha asks the king what he would do if Angulimala were a monk, refraining from killing living beings, he teaches the king to develop a principle of distinction: the wisdom to respond differently toward those who are actively engaging in violence and those who are not (or who are no longer). King Pasenadi is persuaded by the Buddha’s question. He admits that if Angulimala had renounced violent conduct, then he would warrant different treatment. Rather than killing Angulimala, the king vowed to protect him. This sutta is not only about Angulimala’s transformation, but about King Pasenadi’s transformation as well.

It is unclear whether Angulimala might today be described as a serial killer or terrorist, or whether King Pasenadi’s mission was a law enforcement or military operation. Indeed, in the case of targeted killings, the boundary between criminality and terrorism is not always clear. But to whatever extent police and military personnel deploy to situations of violence, ranging on a continuum from internal riots and disturbances through to fully fledged armed conflicts, there are rules which encourage restraint in carrying out their missions.

In law enforcement contexts, the State must distinguish in in its use of force between those who pose a threat of death or serious injury, and those who do not, and to ensure that the use of force is proportionate to the threat encountered. Police should resort to lethal or potentially lethal force only as a last resort – only if other means remain ineffective to protect themselves and others from death or serious injury. Such use of force is mainly governed by international human rights law and domestic law and must be strictly regulated by States to ensure that it is not used in an excessive or otherwise arbitrary way.[1]

For their part, military personnel engaged in armed conflict must distinguish between combatants and non-combatants. Such use of force is governed by International Humanitarian Law (IHL), otherwise known as the Law of Armed Conflict, which rests on (among others) the principles of distinction (distinguishing between combatants and non-combatants); proportionality (ensuring that any civilian collateral damage from an attack is not excessive in relation to the military advantage to be gained) and precaution (taking constant care in the conduct of military operations to spare the civilian population). This body of law serves to limit the brutality of war and to protect those who do not, or no longer, engage in hostilities.

Angulimala, who had previously killed and maimed countless people without any regard for his victims’ suffering, is now deeply moved by this sight of a single woman and her baby in danger. The Buddhist teachings have instilled in him the principle of humanity: the compassion that does not wish suffering upon another.

The Buddha advises Angulimala to go to the tormented woman and to say to her,

Angulimala hesitates, recalling that he has intentionally killed many living beings. So the Buddha replies,

“Then in that case, Angulimala, go to that woman and on arrival say to her, ‘Sister, since I was born in the noble birth, I do not recall intentionally killing a living being. Through this truth may there be wellbeing for you, wellbeing for your fetus.'”

Responding, “As you say, lord,” to the Blessed One, Angulimala went to that woman and on arrival said to her, “Sister, since I was born in the noble birth, I do not recall intentionally killing a living being. Through this may there be wellbeing for you, wellbeing for your fetus.” And there was wellbeing for the woman, wellbeing for her fetus.

In IHL, the principle of humanity forbids the infliction of all unnecessary suffering, injury or destruction.[2] Angulimala’s compassion for the woman and child reflect this commitment to minimizing the suffering of others. His act of truth blesses the woman and grants her protection from a form of violence that is inherent to existence, the violence of childbirth.

This humane moment in Angulimala’s life is juxtaposed with the scripture’s account of locals beating Angulimala with dirt clods, stones, and potsherds until his head is broken open and dripping with blood. The Buddha never condones this violence, but encourages Angulimala to “bear with it.” Even though the misinformed people around him do not demonstrate any recognition of his humanity, Angulimala recognizes the humanity of others and does what is in his power to protect them.

Left out of this Buddhist account is any mention of punishment of Angulimala. While the abandonment of his former violent life and ordination as an unarmed Buddhist monk mean that he should be protected from State violence according to modern human rights law and/or IHL, he would still be liable to stand trial and receive punishment for his crimes. Here modern criminal law and the Buddhist texts appear to diverge, with the former advocating a degree of retributive justice, while the latter perhaps represents an example of radical restorative justice, or a form of cosmic justice in which Angulimala is penalized and his victims and their families reconciled or recompensed in another way.

States often face situations in which their officials must use force either to seek victory in armed conflicts, or to maintain or restore public security, law and order in other situations of violence.

By renouncing violence and becoming a monk, Angulimala became entitled to the King’s protection. It was this protection which, in turn, gave the repentant criminal space to develop the moral power needed to protect the woman in breech birth. As King Pasenadi was, we are asked to believe that it might be possible to see a former murderer as a monk – a former enemy as someone who is entitled to protection.

Who once was heedless,
but later is not,
brightens the world
like the moon set free from a cloud.

His evil-done deed
is replaced with skillfulness:
he brightens the world
like the moon set free from a cloud.

Whatever young monk
devotes himself
to the Buddha’s bidding:
he brightens the world
like the moon set free from a cloud.

May even my enemies
hear the Dhamma time & again
from those who advise endurance, forbearance,
who praise non-opposition,
and may they follow it.

For surely he wouldn’t harm me,
or anyone else;
he would attain the foremost peace,
would protect the feeble & firm.”

The Angulimala Sutta from the Majjhima Nikaya, translated into English by Thanissaro Bhikkhu, can be read at Access to Insight. All sutta quotations in this essay derive from this source.

Dr. Christina Kilby is Assistant Professor of Religion at James Madison University and specialises in Tibetan Buddhism. In this field, she was awarded a fellowship by the Rare Book School at the University of Virginia to apply analytical bibliography (the study of books and manuscripts as physical objects) to Tibetan literary materials. She earned her B.A. degree in Religious Studies from Davidson College, her Master of Theological Studies degree from Harvard Divinity School, and her Ph.D. in History of Religions from the University of Virginia. She received a Fulbright-Hays fellowship in 2013-14 and has conducted extensive fieldwork among Tibetan communities in China, India, Nepal, and the United States.