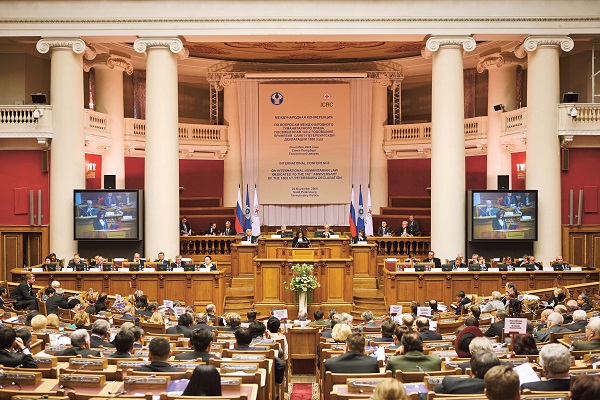 As the guardian and promoter of IHL, the ICRC takes action to protect and assist victims of armed conflicts and other situations of violence, and to foster respect for the law. It does the latter, notably by spreading knowledge of IHL, by supporting its implementation at the domestic level, by monitoring respect for it and by reminding parties to conflicts of their obligations. The ICRC also plays an important role in the development of IHL.

“The International Committee of the Red Cross (ICRC) is an impartial, neutral and independent organization whose exclusively humanitarian mission is to protect the lives and dignity of victims of armed conflict and other situations of violence and to provide them with assistance.

Established in 1863, the ICRC is at the origin of the Geneva Conventions and the International Red Cross and Red Crescent Movement. It directs and coordinates the international activities conducted by the Movement in armed conflicts and other situations of violence.”

The ICRC’s activities to protect people during armed conflict and other situations of violence are aimed at obtaining full respect for applicable law. The ICRC cannot physically protect people. Instead, it seeks to minimize the dangers to which they are exposed, prevent and put an end to the abuses to which they are subjected, draw attention to their rights, and make their voices heard. In other words, the ICRC monitors respect for IHL and reports violations to the pertinent authorities.

The aim of ICRC assistance is to preserve the lives and/or restore the dignity of individuals or communities adversely affected by armed conflict or other situations of violence. Assistance activities principally address the consequences of violations of IHL. They may also tackle the causes and circumstances of these violations by reducing exposure to risk. Assistance activities vary with the situation. They cover a broad range: from the provision of food or medicines to capacity building for the delivery of essential services, such as rehabilitation of water supplies or medical facilities and the training of primary-health-care personnel, surgeons and prosthetic/orthotic technicians.

The Statutes of the International Red Cross and Red Crescent Movement specify that the ICRC’s role includes the following in particular:

“to undertake the tasks incumbent upon it under the Geneva Conventions, to work for the faithful application of international humanitarian law applicable in armed conflicts and to take cognizance of any complaints based on alleged breaches of that law” (Article 5, paragraph 2 (c))

“to work for the understanding and dissemination of knowledge of international humanitarian law applicable in armed conflicts and to prepare any development thereof” (Article 5, paragraph 2 (g)).

Dissemination and implementation of the law

Ignorance of the law is a major obstacle to respecting it. For this reason, the ICRC reminds States of their obligation to make IHL widely known. It also takes action to this end, encouraging incorporation of IHL in educational programmes, military training and university curricula. The ICRC further reminds States that they must take all the steps necessary to ensure that the law is implemented at the domestic level and applied effectively.

It does so chiefly through its Advisory Service on IHL, which provides technical guidance to States and helps their authorities adopt domestic implementing laws and regulations.

Monitoring respect for IHL and reminding belligerent parties of their obligations

The four Geneva Conventions and their Additional Protocols give the ICRC a specific mandate to act in the event of armed conflict. During international armed conflicts, the ICRC has a right to visit prisoners of war and civilian internees to make sure that their treatment and the conditions in which they are being held are consonant with IHL. Information on the detainees must be sent to the ICRC’s Central Tracing Agency, which ensures that detainees do not go missing. The ICRC also provides humanitarian assistance, such as consignments of foodstuffs, medical supplies and clothing, to people in need.

In addition to the tasks incumbent upon it under IHL treaties, the ICRC has a broad right of initiative (see common Article 3, Article 9 of the First, Second and Third Geneva Conventions, and Article 10 of the Fourth Geneva Convention). It may always offer its services to the parties to a conflict.

The ICRC also has a right of initiative – recognized in the Statutes of the International Red Cross and Red Crescent Movement – in situations that do not reach the threshold of an armed conflict, but that warrant humanitarian action. In situations where IHL does not apply, the ICRC may offer its services to governments without that offer constituting interference in the internal affairs of the State concerned.

On the strength of the conclusions it draws from its protection and assistance work, the ICRC makes confidential representations to the relevant authorities in the event of violations of IHL. Confidentiality is one of the main working methods of the ICRC. It is a long-standing ICRC policy and a practice that derives directly from the principles of neutrality and impartiality. It enables the ICRC to establish and maintain a constructive dialogue with parties to an armed conflict and other stakeholders; to have access to conflict areas, places of detention and victims of armed conflict and other situations of violence; and to ensure the security of its beneficiaries and of its staff. Bilateral confidential representations to the parties to a conflict is the ICRC’s preferred mode of action to put an end to violations of IHL or of other fundamental rules protecting persons in situations of violence, or to prevent the occurrence of such violations. However, this mode of action is complementary to others. In particular, the ICRC reserves the right to issue a public denunciation of specific violations of IHL if:
(1) the violations are major and repeated or likely to be repeated;
(2) delegates have witnessed the violations with their own eyes, or the existence and extent of those violations have been established on the basis of reliable and verifiable sources;
(3) bilateral confidential representations and, when attempted, humanitarian mobilization efforts (i.e. calling on third parties to influence the conduct of parties to a conflict who commit violations of IHL) have failed to put an end to the violations; and
(4) such publicity is in the interest of the persons or populations affected or threatened.

Treaties developing IHL are adopted by States. Under the Statutes of the International Red Cross and Red Crescent Movement, the ICRC also has a mandate to “prepare any development” of IHL. In order to fulfil this mandate, the ICRC, notably, prepares draft texts for submission to diplomatic conferences. For instance, the first drafts of the Geneva Conventions were drawn up by the ICRC in consultation with States, submitted and further discussed, modified and finally adopted at diplomatic conferences.

The ICRC also organizes consultations with States and other interested parties with a view to ascertaining the possibility of reaching agreement on new rules or otherwise strengthening IHL. For instance, following the 31st International Conference of the Red Cross and Red Crescent, and the adoption of Resolution 1: Strengthening Legal Protection for Victims of Armed Conflicts, the ICRC has engaged in consultations with States in order to strengthen IHL in the fields of detention and strengthen compliance with IHL.