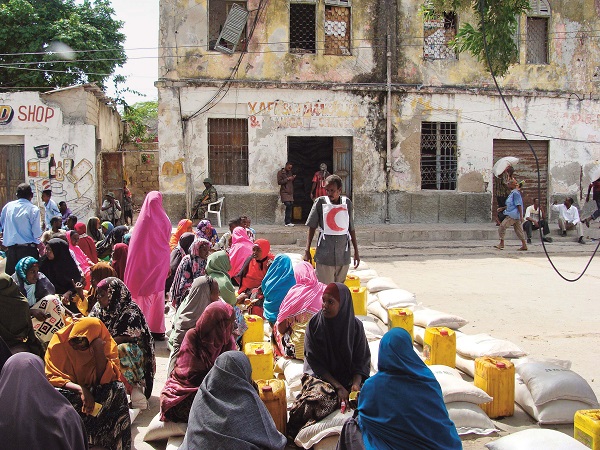 Armed conflicts, whether international or non-international, give rise to significant needs for humanitarian assistance. Civilian populations are often deprived of basic necessities in war – food, water and shelter – and have no access to health care and other essential services. The reasons vary. Property may be destroyed as a result of combat operations and farming areas may be unusable owing to the dispersion of landmines, cluster munitions or other explosive remnants of war. Entire populations may be forced to leave their homes, abandoning their customary sources of income. In addition, economic and other infrastructure may be damaged or disrupted, affecting the stability of entire countries or regions for a prolonged period of time.

Under international law, States bear the primary responsibility for ensuring that the basic needs of civilians and civilian populations under their control are met. However, if States are unable or unwilling to discharge their responsibilities, IHL provides for relief action to be taken by others, such as humanitarian organizations, subject to the consent of the State concerned. In order to carry out their tasks, humanitarian organizations must be granted rapid and unimpeded access to the people affected.

The legal framework pertaining to humanitarian assistance can be found in the Geneva Conventions and their 1977 Additional Protocols as well as in customary IHL. IHL rules on humanitarian access and assistance establish, first, that relief actions may be authorized – and in a situation of occupation must be authorized – when civilian populations are without adequate supplies. Second, IHL sets out in detail the conditions governing such operations, with a view to facilitating the delivery of humanitarian relief to the people affected.

The relevant provisions of Additional Protocols I and II stipulate that relief activities “shall be undertaken” when the population lacks supplies essential for its survival, thereby clearly establishing a legal obligation. However, they further provide that such obligation is subject to the consent of the State concerned (except during an occupation). Thus, a balance has to be found between two apparently contradictory requirements: on the one hand relief action must be undertaken and on the other, the consent of the State concerned has to be obtained.

The conditions for giving consent vary with the context:

• In international armed conflicts – when they are not taking place on occupied territories – the parties concerned must not withhold consent on arbitrary grounds: any impediment(s) to relief action must be based on valid reasons. In particular, if it is established that a civilian population is threatened with starvation and a humanitarian organization that provides relief on an impartial and non-discriminatory basis is able to remedy the situation, a party is obliged to give consent.

• In non-international armed conflicts, the same rules outlined above apply. It remains a matter of debate however whether the consent of the territorial State would be needed if the relief is for civilians in the territory controlled by the non-State armed group.

• In occupied territories, the occupying power has a duty to ensure that the population is provided with food and medical supplies. In particular, it should bring in the necessary foodstuffs, medical stores and other articles if the resources of the occupied territory are inadequate.

If all or part of the population of an occupied territory is inadequately provided with the necessary supplies, the occupying power is under an obligation to give consent to relief schemes to aid the population.

What are the conditions under which humanitarian relief must be delivered?

The second set of rules concerns the conditions under which humanitarian relief must be delivered. These are as follows:

• Humanity, impartiality and non-discrimination: the provisions of IHL apply only to assistance that is impartial and humanitarian in character and conducted without any adverse distinction. This means, notably, that relief must be given to all persons in need, regardless of the party to which they belong, and regardless of their religion, sex, etc.

• Control: Parties allowing the passage of relief may control its delivery, notably by setting out the technical arrangements, including provisions for inspection, governing such passage.

IHL and the ‘right to intervene on humanitarian grounds’

In so far as a ‘right – or even a duty – to intervene’ is tantamount to justifying armed intervention for humanitarian reasons, this is a matter not for IHL but for the rules on the legality of the use of armed force in international relations: in other words, it is a matter for jus ad bellum. The concept of the ‘responsibility to protect’ is gradually replacing the notion of a ‘right’ or ‘duty’ to intervene on humanitarian grounds.

The ICRC’s study on customary law, published in 2005, identified the following rules on the provision of humanitarian assistance. They apply during both international and non-international armed conflict:

• The parties to the conflict must allow and facilitate rapid and unimpeded passage of humanitarian relief – if it is impartial in character and conducted without any adverse distinction – for civilians in need, subject to their right of control.

• The parties to the conflict must ensure for authorized humanitarian relief personnel the freedom of movement necessary to carry out their tasks. Only in case of imperative military necessity may their movements be temporarily restricted.

• Starving the civilian population as a method of warfare is prohibited.