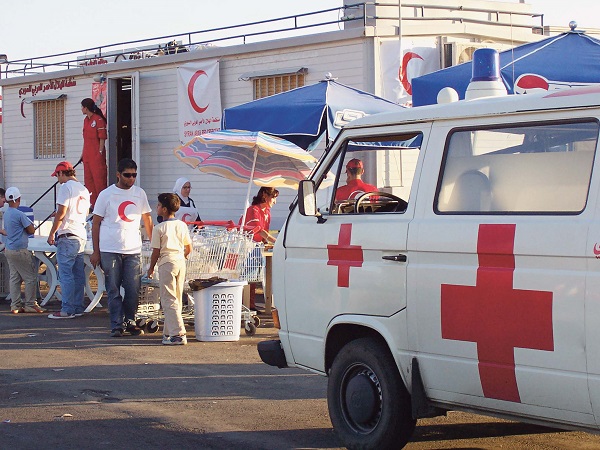 The red cross, red crescent, red lion and sun, and red crystal emblems are internationally recognized symbols and the visible expression of the neutral and impartial assistance and protection to which the wounded and the sick in armed conflict are entitled under IHL. These emblems have two distinct functions. First, they serve as the visible sign of the protection afforded during armed conflict to the medical personnel, units and transports of armed forces, and to religious personnel (protective use). Second, the emblems show that a person or an object is linked to the International Red Cross and Red Crescent Movement (indicative use). The Movement, as mentioned above, consists of the ICRC, the International Federation of Red Cross and Red Crescent Societies, and all the National Red Cross and Red Crescent Societies.

Use as a protective device

The emblem is primarily intended to be used as a protective device by the medical services of armed forces on the ground, at sea and in the air. In addition, with the express authorization of the pertinent public authorities and under their control, civilian medical personnel, hospitals and other civilian medical units, and transports assigned to the treatment and care of the wounded, sick and shipwrecked in times of armed conflict may also use the protective emblem. Because the emblem is intended to represent the protection due to certain persons and objects in times of armed conflict, it should be as large as possible, so that it is visible, even from great distances.
The emblem per se does not confer the protection. It is simply the visible sign of the protection afforded by the Geneva Conventions and their Additional Protocols.

Use as an indicative device

The emblem is also used for indicative purposes, during war or in times of peace, to show that a person or an object is linked to the Movement or to one of its components. In this instance, the emblem should be small in size in order to avoid confusing indicative and protective use.
The ICRC and the International Federation are entitled at all times to use the emblem for both protective and indicative purposes.

Misuse of the emblem

Any use of the emblem, during armed conflict or in peacetime, that is not expressly authorized by IHL constitutes misuse and is prohibited. There are three types of misuse:

• imitation, meaning the use of a sign that, by its shape and/or colour, may cause confusion with one of the recognized emblems;
• usurpation, or the use of the emblem by any person or organization that is not entitled to do so (commercial enterprises, medical establishments or pharmacies, non-governmental organizations or individuals, etc.).
Usurpation also includes the failure of persons authorized to use the emblem to do so in accordance with the rules of IHL;
• perfidy, or the use of the emblem to feign protected status in order to kill, injure or capture an adversary. Perfidious use of the emblem in situations of international armed conflict is a war crime.

Misuse of the emblem during war or in peacetime may jeopardize the entire system of protection set up by IHL, because belligerent parties may lose trust in the emblem’s protective function. By undermining the public significance of the emblem, misuse may also hamper safe access for the Movement to persons and communities affected by humanitarian crises and undermine its ability to deliver assistance and protection services.

IHL specifies that States must take steps to prevent and punish misuse of the emblem in wartime and peacetime alike, and to enact legislation on the use and protection of the emblem, providing for appropriate sanctions and penalties in the event of misuse.

The distinctive emblems recognized under IHL are not intended to have any religious, ethnic, racial or political significance or association.

The Geneva Conventions provide for three emblems: the red cross, the red crescent, and the red lion and sun, the last of which is no longer in use. 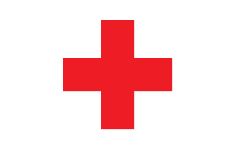 3. The red cross, the red crescent, and the red cross and the red crescent side by side
Additional Protocol III also allows the National Societies of those States that decide to use the red crystal to incorporate within the red crystal another emblem or sign that meets two conditions.
First, the other emblem or sign must already be in effective use. Second, it must have been the subject of a communication through the Depositary (the Swiss Federal Council) to other High Contracting Parties (the other States party to the Geneva Conventions) and to the ICRC prior to the adoption of Additional Protocol III. Currently, the only other emblem that meets these two conditions is the red shield of David, which the Israeli National Society in Israel (Magen David Adom) has been using since the 1930s.

4. The red shield of David within the red crystal