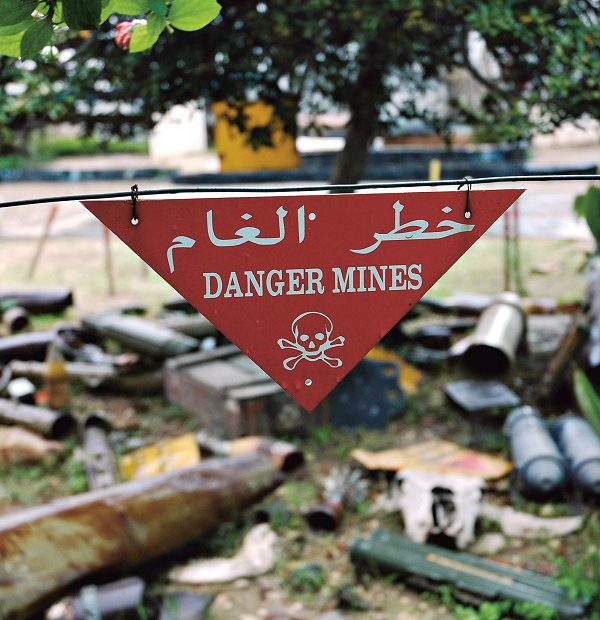 The use of a specific weapon in armed conflict can be completely prohibited and the weapon itself considered unlawful (e.g. anti-personnel mines, cluster munitions, chemical weapons). Alternatively, its use may be restricted in certain situations (e.g. the prohibition against using airdelivered incendiary weapons against a military objective situated in an area with a concentration of civilians).

Anti-personnel mines
Under the Convention on the Prohibition of the Use, Stockpiling, Production and Transfer of Anti-Personnel Mines and on their Destruction (1997), States must not under any circumstances use, develop, produce, stockpile or transfer anti-personnel mines, or help anyone else to do so. They must also destroy all existing stockpiles of anti-personnel mines and within a fixed time period, clear land where these devices have been laid.

Other conventional weapons
The Convention on Prohibitions or Restrictions on the Use of Certain Conventional Weapons Which May Be Deemed to Be Excessively Injurious or to Have Indiscriminate Effects (CCW) of 1980 also contains prohibitions against and restrictions on certain kinds of weapon:

• Protocol I of the CCW prohibits the use of any weapon, the primary effect of which is to injure by fragments that are not detectable in the human body by X-rays.
• Protocol II prohibits or restricts the use of mines (both anti-personnel and anti-vehicle), booby-traps and other similar devices. This Protocol was amended and new regulations added in 1996.
• Protocol III regulates the use of incendiary weapons, or weapons that are primarily designed to set fire to objects or to burn persons through the action of flame or heat, such as napalm bombs and flame throwers.
• Protocol IV prohibits the use and transfer of laser weapons specifically designed to cause permanent blindness.
• Protocol V requires the parties to a conflict to take measures to reduce the dangers posed by explosive remnants of war (unexploded and abandoned ordnance).

Chemical and biological weapons
The international community banned the use of chemical and biological weapons after World War I (the 1925 Protocol for the Prohibition of the Use of Asphyxiating, Poisonous or Other Gases, and of Bacteriological Methods of Warfare). This ban was reinforced in 1972 (the Biological Weapons Convention) and 1993 (the Chemical Weapons Convention) by prohibiting, in addition to their use, the development, stockpiling and transfer of these weapons, and requiring that stockpiles be destroyed. The Chemical Weapons Convention also prohibits the use of riot-control agents (e.g. tear gas) as a method of warfare.

However, in 1996, the International Court of Justice, in an advisory opinion, confirmed that IHL applied to nuclear weapons, particularly the IHL principle of distinction and the prohibition against causing unnecessary suffering. In applying these and related rules to nuclear weapons, the Court concluded that “the threat or use of nuclear weapons would generally be contrary to the rules of international law applicable in armed conflict.” The Court was however unable to decide whether, even in the extreme circumstance of a threat to the survival of the State, the use of nuclear weapons would be legitimate.

Ensuring that new weapons are consistent with IHL

IHL also seeks to regulate developments in weapons technology and the acquisition of new weapons by States. Article 36 of Additional Protocol I requires each State Party to ensure that the use of any new weapon, means or method of warfare that it studies, develops, acquires or adopts will comply with the rules of international law that are binding on that State. Assessments carried out to this end will contribute to ensuring that the State’s armed forces can conduct hostilities in accordance with that State’s international obligations.

A number of methods of warfare are specifically prohibited under treaty and customary IHL. A few examples are given below.

Denial of quarter
Ordering that no quarter will be given and threatening an adversary therewith or conducting hostilities on this basis is prohibited. An adversary’s forces must be given an opportunity to surrender and be taken prisoner. Wounded soldiers must be respected and protected.

Pillage
Pillage – the forcible seizure of private property by an invading or conquering army from the enemy’s subjects – is prohibited.

Perfidy
Killing, injuring or capturing an adversary by resort to perfidy is prohibited. Article 37 of Additional Protocol I defines ‘perfidy’ as “acts inviting the confidence of an adversary to lead him to believe that he is entitled to, or is obliged to accord, protection under the rules of international law applicable in armed conflict, with intent to betray that confidence.” This includes, for example, feigning injury or sickness in order to attack an enemy combatant. Ruses of war, i.e. acts intended to confuse the enemy that do not violate international law, and that respect the prohibition against perfidy, are not prohibited. This would include, for instance, the use of camouflage, decoys, mock operations, and misinformation.