Tarun Sarwal and the Red Cross Innovation Laboratory look for technologies that can survive the difficult conditions of disaster areas: “the most common request of refugees was to call home. We have to adapt”

An article by Harel Ilam, published in Calcalist on 7 December 2016 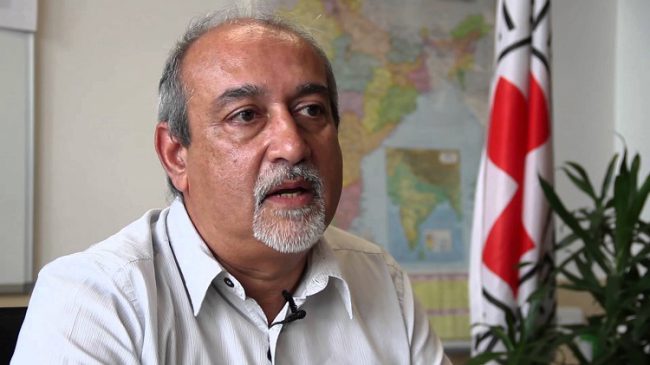 “There’s lots of talk about how technology can resolve the world’s problems, but in most cases there’s little thought beyond that,” says Tarun Sarwal, head of the Red Cross Organization’s Innovation Laboratory.

“People come with ideas, but they don’t understand what’s happening on the ground.” Without budgets and with a team of just four, Sarwal is charged with creating technological solutions that can work under the harshest conditions, in battlefields or areas plagued by epidemics and poverty, without communication, water or energy sources. At the same time, he has to shake up one of the world’s largest and oldest charity [sic] organizations and adapt it to the twenty-first century.

“They talk to me a lot about drones,” he says to give an example of the difficulty in adapting new technologies to field conditions. “On the face of it, this is a very promising technology: you can use them to transport packages, for observation, for mapping and even to spray fields. In Italy, for instance, we used drones to assess the earthquake damage to remote villages. But at the same time there’s the reality on the ground and it’s not a simple one. In most countries where we have a presence, if we send a drone up into the air someone will intercept it or steal it.” 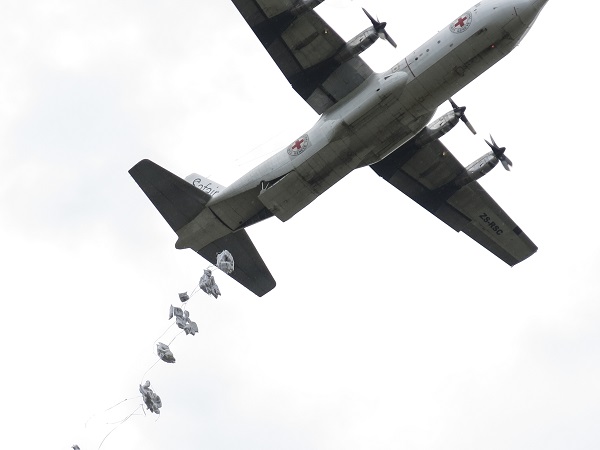 In order to overcome the lack of budgets, Sarwal’s team works with entrepreneurs, governments and universities around the world. Among other things, the team set up a laboratory in collaboration with the Swiss institute of technology, EPFL, where many of the new developments of the Red Cross are now tested. According to Sarwal, his team is currently promoting about 40 projects, many of them small models that are not innovative, but rather adapted to the situation in the field, which is sometimes decades behind modern technological potential.

As an example he cites a project in Mali, which required treating 50,000 refugees. The country’s outdated second-generation cellular network couldn’t support the broadcasts of information. In order to cope with the problem, Sarwal’s team developed an instrument that enabled the transfer of whole medical files in text messages. In another instance, the same technology was used in Liberia to create a local social network for coordination among volunteers.

“The internet makes it possible for people to help themselves”

Sarwal led the establishment of the innovation laboratory two years ago, after returning from a year-long trip around the world with his daughter, with the purpose of becoming familiar with the different challenges the organization faces. “Not only the technology is changing; the situations we need to deal with, which demand more flexibility than ever, are, too,” he says in defining his greatest challenge. “The villages have become cities, the residents are more educated, the level of basic services they are accustomed to has increased and we have to adapt to that.”
Caption: Tarun Sarwal, head of the Red Cross Innovation Laboratory

Thus, for instance, after the typhoon that hit the Philippines, the first thing the survivors wanted to do was hook up to the internet and check on their relatives, even before receiving food and water. “The most common request in the refugee centers was to call home,” he told us. But the lack of access to the electricity grid prevented the refugees from charging their mobile phones.

With the help of Sarwal’s team and a few local entrepreneurs, the Red Cross staff set up a solar system that enabled the charging of 50 devices simultaneously. In the absence of budgeting, the systems were loaded onto wagons, which for months became the refugees’ sign of when they could speak with their relatives. 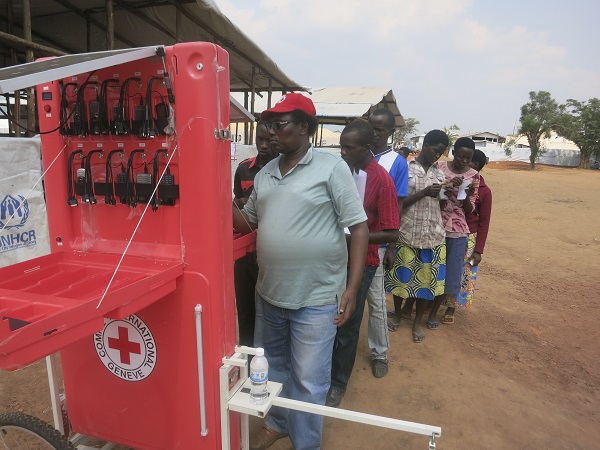 According to Sarwal, the internet and mobile revolutions are changing not only the requests of the survivors, but also the way in which the Red Cross thinks about aid. “The connection to the internet empowers people to help themselves,” he explains. “Social networks are a powerful tool for creating social change. They connect people who are willing to help with those who need help, and they also help people get help themselves. After the typhoon in the Philippines, people wanted to hook up to the internet to talk with their relatives in other countries who could sent them aid and money. We want to develop technologies that will help people in the future do what they want to do.

According to him, the solution is to develop technologies that enable speedy deployment of communication and energy infrastructures even in disaster areas. “In Kenya, we are working on developing technology to set up small electricity grids that will allow the medical clinics to work even when the national electricity grid collapses.” Another tool for aid is crowdfunding sites: Last June, a village in India was assisted through crowdfunding, which raised about a million rupees to dig a canal to connect it with the nearby river.

Simple Solutions that Can Be Deployed with Zero Cost

Sarwal speaks a lot about hackathons, a common custom in the Israeli hi-tech community, and for him, the main way of recruiting new developments. In the last hackathon organized by the Red Cross, about 150 groups participated, from countries such as Mexico, Brazil, Portugal and even Israel. The winners received financial support, advice and assistance in making connections in order to turn their inventions into commercial applications that can serve the Red Cross, as well.

On the face of it, the ideas that Sarwal describes sound simple and obvious, but their importance lies in the ability to deploy them with zero cost anywhere in the world. One example is an inexpensive sensor, which can operate for weeks on a tiny battery, which analyzes environmental conditions, making it possible to know whether the aid products and food the Red Cross left were used properly or stolen. Another example is the development of techniques that make it possible in the wake of a disaster to recycle ruins for reconstruction of buildings, instead of removing them from the area.

Another solution is a body bag with vacuum closure, which enables the preservation of bodies without refrigeration for a month. “We work in places where there is tremendous heat so that within just days or even a few hours it is impossible to identify some of the disaster casualties,” Sarwal explains the need for this morbid invention. 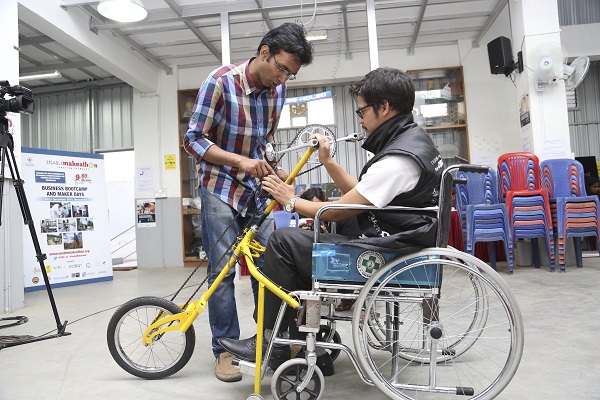 More optimistic solutions that came out of the hackathons include systems to test the quality of well water that operate without electricity, a device that makes it possible to convert a wheelchair into a tricycle that can navigate difficult terrain or a modular wheelchair for children who suffer cerebral palsy that can “grow with the child.” “The system we created enables some of the developments to move from the planning board to the field within just a few months,” Sarwal says proudly. 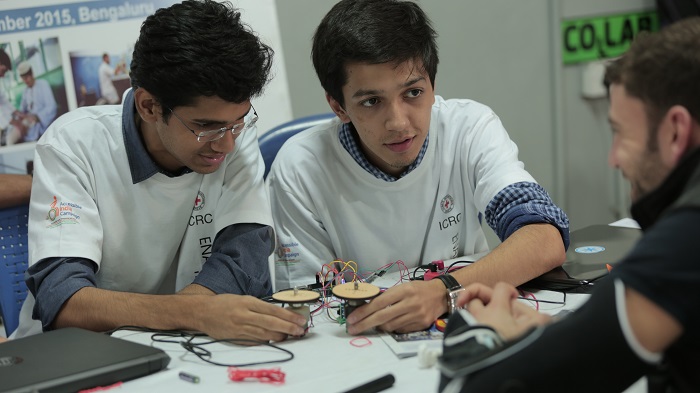 The introduction of technologies and inventions into the field is a bit more complex. “The changes don’t happen overnight. We have to try them in difficult field conditions and the volunteers need to learn how to work with the technologies,” Sarwal explains. In order to prepare the volunteers, the Red Cross organizes cooperative ventures for training in virtual reality. “The project was so successful that we have 20 different training programs in development,” he says.

One of these programs was developed in collaboration with a police organization in southern Asia, where it is used to train rescue staff to work alongside the police in the case of riots. In another case, the Red Cross connected with the Czech toy company, Bohemia, which produced several VR demonstrations of field conditions in Myanmar, Iraq and Bangladesh.

The Most Outstanding Innovative Developments of the Red Cross

The article in Calcalist (Hebrew)