An interview with Agnes Coutou, ICRC Protection Coordinator, which was published in Hebrew in Xnet, 18 July 2016 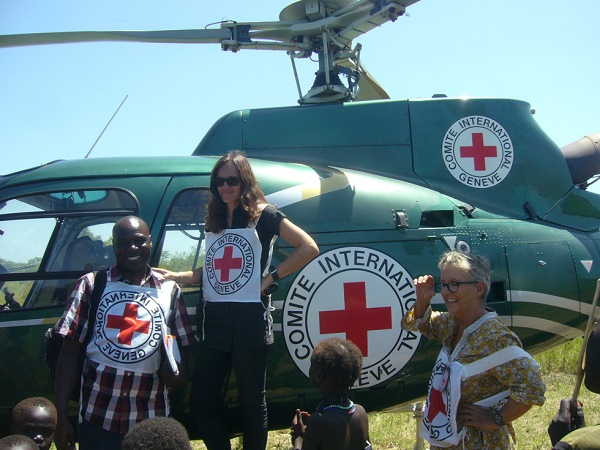 In South-Sudan, next to the green helicopter. “We were afraid that the people and the fighters on the ground would think we’re the enemy and shoot us.”

International Committee of the Red Cross worker: “I found myself faced with a drunk person holding a weapon. Luckily I was not alone.”

Agnes Coutou from France was sent to provide humanitarian aid in war zones in Africa and found herself confronted with armed fighters. She has experienced many other challenges along the way.

For Agnes Coutou, walking with rubber boots in jungles, sleeping in a tent and facing monkeys and snakes are real life experiences, not a reality show on television. Coutou works at the International Committee of the Red Cross (ICRC), and throughout her career, she has been sent on dangerous missions in war zones such as Congo, Liberia and South Sudan.

“In order to reach people and help them, you have to cross rivers, traverse woods or drive trucks in muddy terrains,” she says. “You are in the middle of nowhere, and if you encounter danger, you do not have the option of to be rescued by a helicopter, because there is nowhere to land there.” 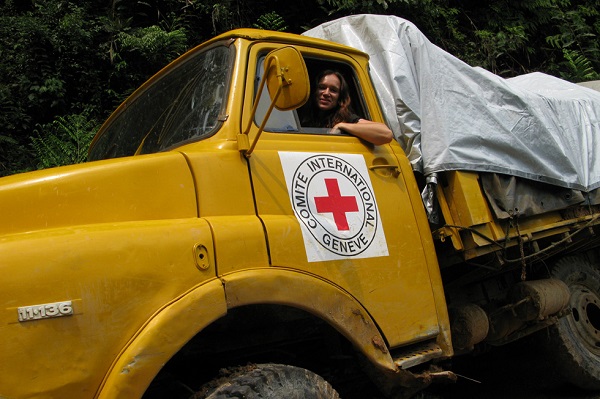 In Congo. “In order to reach people and help them, you have to cross rivers, traverse woods or drive trucks in muddy terrains”, says Coutou.

What was the most dangerous situation you got into?

“I found myself, on three occasions, faced with a drunk carrying a weapon. In a situation like this, it is impossible to know what is in his mind. One minute everything is normal, and the next moment he raises a pistol at close range because he didn’t like something that was said. Fortunately, in all of these situations I had with me a local staff member who calmed the situation down. If I were alone, I do not know how it would have ended.” 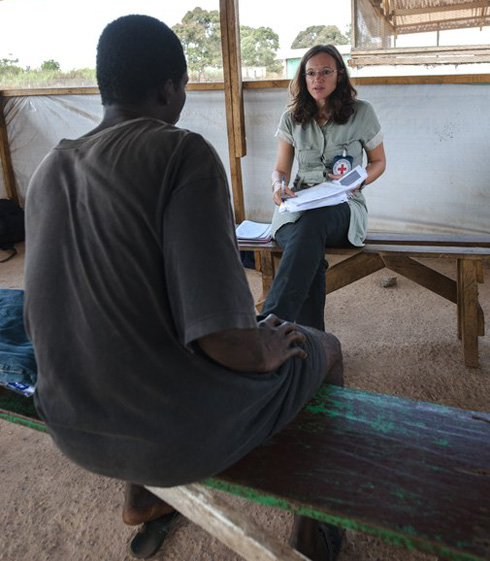 Coutou with a prisoner in Liberia. “An amazing job, despite all the difficulties”

Blood on the hands

Coutou (39) was born in a French village near Bordeaux where she studied political science and international humanitarian law. Before joining the International Committee of the Red Cross, she worked in other international organizations, including the UN and Doctors Without Borders. In the last two years, she has been living in Tel Aviv and serves as a protection coordinator at the ICRC in Israel and the Occupied Territories. This is a relatively calm job, which came after years of work in the field.

All the senior position holders at the ICRC began their work as field officers”, she says. “It’s a job that requires not only knowledge of humanitarian law and proficiency therein, but many other skills as well: knowing how to deal with people who might be dangerous, keeping one’s cool in difficult situations, and being creative.”

Many of those who might be dangerous, according to Coutou, are armed rebels she met in remote locations in Africa. “It’s somewhat intimidating to meet with such people, because most of them have blood on their hands. I have been in situations in which I met with the victims of a violent event or another, and a short time later I negotiated with the attackers. But my place there was not to judge or blame, but rather to explain humanitarian law and to make sure people who came to help are not targeted”.

She says she realized, often in retrospect, how dangerous the situation she had faced was. “Another case was funny and scary at the same time. We were in South Sudan, and we wanted to reach a population who was extremely far away, and the only way to reach it was by helicopter. The problem was that the only helicopter we could get was green, the same color as the one of the local army, and we were afraid that the people and the fighters on the ground would think we’re the enemy and shoot at us. Since we could not paint the helicopter, we hung posters of the Red Cross, then contacted the leader of the local forces and asked him to tell his fighters not to attack us.

As we approached the tension increased, but the helicopter pilot tried to reassure us. When we were near, he put in our earphones Celine Dion’s song “I’m Alive”. We all laughed and said there’s no chance we’ll die today. In the end, everything was fine: when the people saw us, they were scared at first, but in no time, it looked like they were happy to see us.”

Other difficulties she faced were raised due to the physical conditions. “In jungles, you wear rubber boots, which are good for walking in the mud, but not for walking long distances or in the rain. You might also have to deal with monkeys and snakes, and even diseases. One of my colleagues had pneumonia during one of the assignments. He was a big guy, and we had to carry him for a few days until we reached the place where he could receive first aid. But in spite of all the difficulties, this job is amazing. We help people who really need help, and it’s great.” 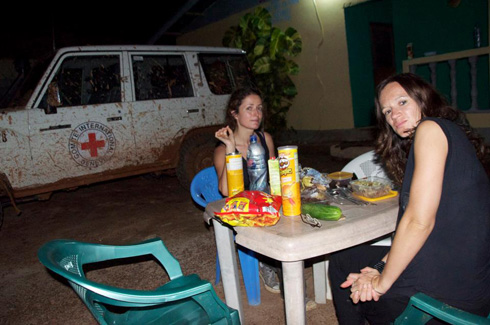 Dinner in the middle of nowhere. “I did not tell my parents everything, so as not to worry them”

Wow, you are a hero

In her current job, she doesn’t have such adventures, but she can still experience situations which raise concern. “There is a lot of responsibility and pressure of a different kind,” she says. “I do not stay only in the Tel Aviv office, but also go out to the field – to meetings with prisoners, for example. Next week I will visit Gaza to talk with our people there.”

Her husband is working in a Norwegian humanitarian organization for refugees, and currently serves in Greece and helps immigrants arriving there. The couple served in the same country in the past, but having to be apart from each other for a long period of time does happen. “In 2000, I served in Kosovo, where there were no mail services at the time, and the Internet was not available. My husband served elsewhere, so we communicated mainly via fax. It sounds like the Stone Age, but that was the way we communicated.”

What reactions do you get on your job?

“Some people say to me: ‘Wow, you are a hero, it’s a really hard work. But there are also those who say: ‘you must be running away from something, otherwise why would you put yourself in a place so dangerous? Why do you live so far away from home?’ But that’s not true. I come from a family that has a tradition of giving and helping others. My parents always encouraged me and were happy for me, but I’m sure there were times they were very worried about me. They did not say it, but I could tell. I did not tell them everything, to spare them from being stressed. When a member of your family is far away, you imagine things which are far worse than in reality. This is true for every country I have worked in.” 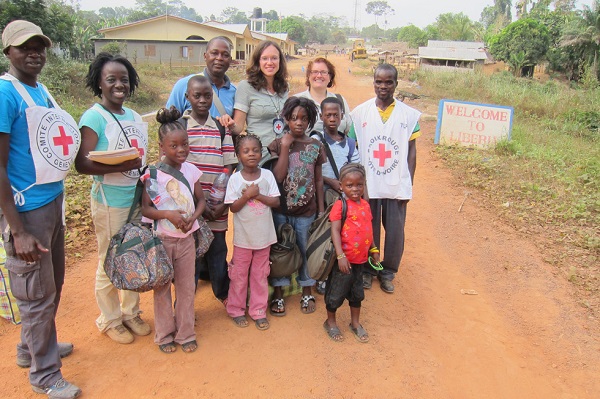 The Border of Liberia and Ivory Coast. “We help people who really need help, and it’s great”.