Can cyber be used as a method of warfare? Is data a target? Can it be considered a target under the under International Humanitarian Law (IHL)?

Watch the video of the first round table on the intersection of IHL and Cyberspace, where some of those questions were discussed.

The round table, held few weeks ago at Tel Aviv University, was a joint initiative of the Blavatnik Interdisciplinary Cyber Research Center and the International Committee of the Red Cross (ICRC), as part of the 6th Annual International Cyber Week.

In addition to the humanitarian work, the ICRC has also been given a mandate by the international community to make sure that IHL is adhered to during armed conflicts and to work for the promotion, better understanding and development of IHL.

“Cyber capabilities of countries and states are so huge now and so powerful, that they could definitely be used as means or method of wars”, said Prof. Andrey Kozik, the Secretary-General at International Law & Arbitration Association in Belarus, who was one of the speakers.

“New technologies often hold great opportunities, but they also can have devastating humanitarian consequences if they are used in warfare against the fundamental principles that we in the ICRC are gathering under International Humanitarian Law”, said Dr. Helen Durham, ICRC Head of International Law and Policy. Durham, who visited Israel for her first time to attend the discussion, said: “It has been really important for me to come here and be part of this first ever ICRC engaged cyber warfare round table”.

“We work to enable better compliance with the rules applicable in conflict, in order to make wars as humane as possible, inter alia by limiting the effects of the hostilities on the civilian population who are caught up in the fighting”, added Durham. 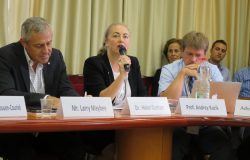 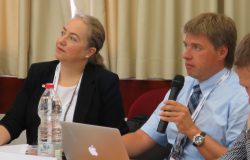 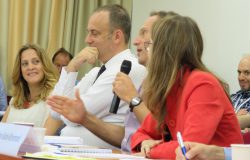 “The ICRC has an interest in cyber warfare, because it is another development in technology that can be used in warfare, and we want to make sure that as it becomes clear how this technology can be used, that it is used in compliance with the rules that govern the law of war”, said Larry Maybee, ICRC Head of the Legal Department in Israel and the Occupied Territories.

The aim of the Round Table was to think strategically about the ‘grand challenges’ of the next decade in the intersection between IHL and cyberspace. The application of International Humanitarian law (IHL) to cyber operations, when used as means and method of warfare during armed conflict is in itself a difficult legal, policy and practical challenge.

“It was very clear that the traditional approach of having just IHL specialists for this session was not going to work anymore. The challenges are too broad, they are too varied, and they are too unexpected”, said Adv. Deborah Housen-Couriel from the Blavatnik Interdisciplinary Cyber Research Center, and the Yuval Ne’eman Workshop for Science, Technology and Security. “What we were trying to do in this roundtable was to bring about a multi-disciplinary investigation of where IHL is today and what the great challenges are that face the next decade”, said Housen-Couriel. 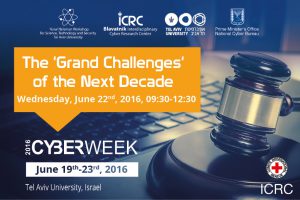 Read more: The Objective: Laws of War for Cyber Warfare

See more photos from the round table