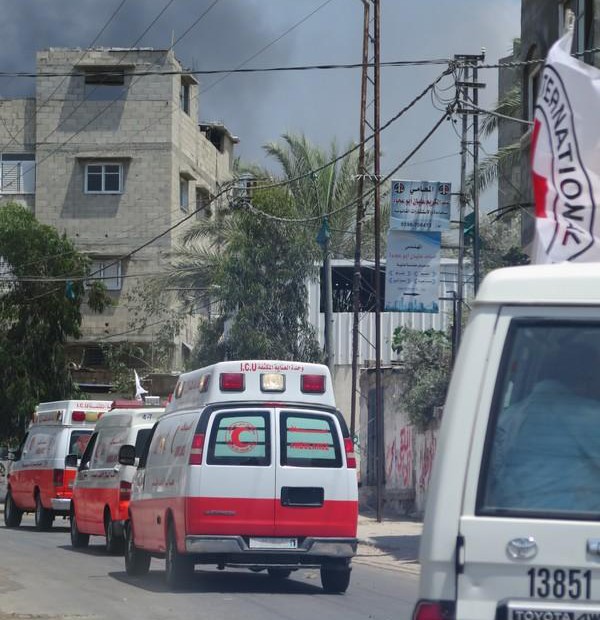 The International Committee of the Red Cross (ICRC) has used its services as a neutral intermediary to facilitate an agreement between the Israel Defense Force and Hamas to allow for the immediate evacuation of the sick and injured people in Gaza city.

“The Israel Defense Force has agreed to suspend hostilities in Shuja’iyya neighbourhood for two hours today,” said Jacques de Maio, head of the ICRC’s delegation in Israel and the occupied territories. “This will enable sick and injured people to receive the medical care they need. It will also give civilians a brief respite from the fighting.”

Under the agreement, ambulances will be able to move into Shuja’iyya district of Gaza, and civilians will be able to evacuate to the west of the Gaza strip if they wish. After another night of intensive hostilities in north-eastern Gaza city, dozens of people are reported dead and over 200 wounded in Shuja’iyya. There is concern that the real toll may be higher. This sharp increase in the intensity of fighting and the resulting human cost is a matter of grave concern to the ICRC.

At the time of publishing this news release, the situation on the ground remains tense and the ICRC is temporarily redeploying its teams from areas where there is an ongoing exchange of fire. However, discussions are ongoing to ensure the evacuation of the sick and wounded.

Since the conflict began, getting sick and injured people in the Gaza strip to hospital has been a top priority for the ICRC. ICRC staff and volunteers from the Palestine Red Crescent Society have been working around the clock in dangerous conditions to provide urgent medical care.

As a neutral intermediary, the ICRC maintains confidential bilateral dialogue with all parties to the conflict. The resulting coordination allows emergency access to people in need and the maintenance of vital infrastructure such as the water-supply system.

Under international humanitarian law, medical personnel, hospitals and ambulances exclusively assigned to medical duties must be spared and allowed at all times to carry out their duties. The parties to the conflict must take all measures needed to ensure access to all those in need and their safe evacuation, without any distinction. International law also obliges the parties to the conflict to respect the red crescent and red cross emblems and to duly protect those displaying those emblems.