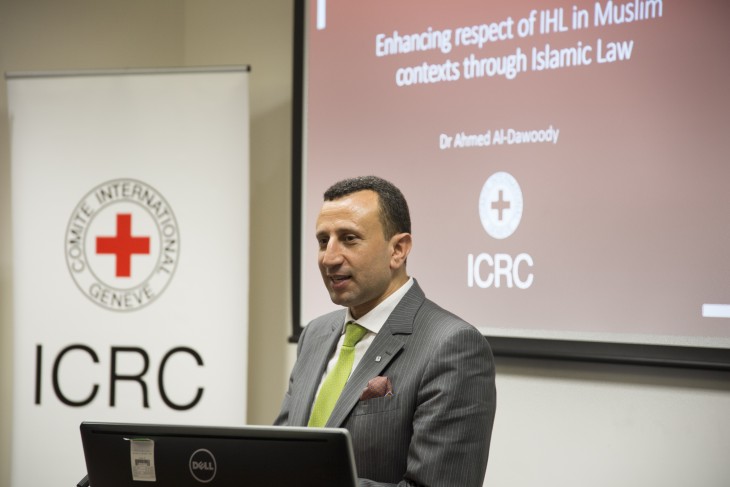 International humanitarian law (IHL) and the Islamic laws of war have more in common than you might think. Here’s why the ICRC takes the overlap of these two legal traditions seriously.

That’s the message the ICRC’s foremost expert on the Islamic laws of war, Dr Ahmed Al-Dawoody, wants to communicate to audiences in Australia and New Zealand.

Emphasising this universality is essential to improving respect and protection for people affected by armed conflict in the Muslim world.

It is unrealistic to expect IHL to be respected if the role of Islamic law in influencing the behaviour of Islamic non-state armed groups or state armed forces is ignored, Dr Al-Dawoody explained during a visit to Australia and New Zealand from February 10-14.

For the ICRC, this is a particularly important point to grasp – given that two-thirds of its work is focused in Muslim-majority countries.

From the Mahabharata to the Torah, numerous ancient traditions have sought to limit the suffering and destruction wrought by war.

It’s no surprise then that the Islamic laws of war share some vital humanitarian principles and norms with IHL.

In recent years, the ICRC’s dialogue with Muslim jurists has explored how Islamic law forbids attacks on the wounded or sick, as well as on medical facilities and staff.

The Islamic laws of war also provide protection for children, detainees, wounded combatants and even the natural environment.

Speaking at a live webinar for ‘The Cove’, an Australian Defence Force professional development site, Dr Al-Dawoody explained how the ICRC’s dialogue with Muslim jurists is a practical and pragmatic approach that is crucial to grasp as conflict becomes more complex.

His visit highlighted the overlap between IHL and Islamic laws of war, and the distinction between Islam as a religion and Islamic law and jurisprudence as an established legal system.

Dr Al-Dawoody’s central message about grounding the principles underpinning IHL in local contexts draws strong parallels to the ICRC’s 2009 publication ‘Under the Protection of the Palm’, which similarly seeks to localise the principles right at the core of IHL.