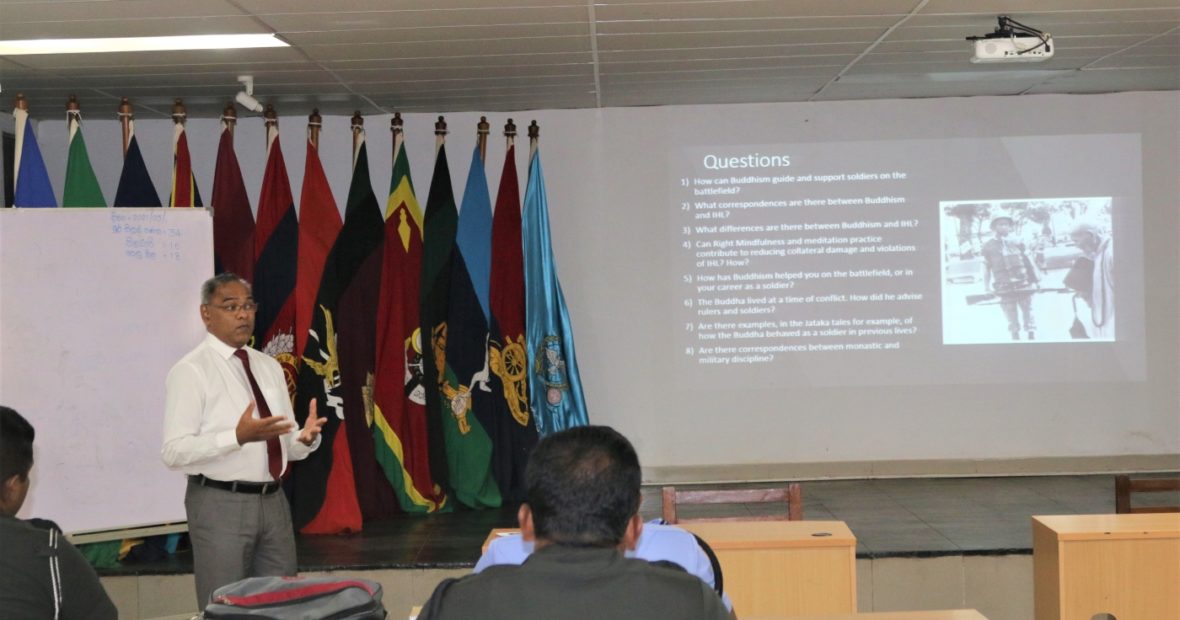 The US War College describes the condition of our world as Volatile, Uncertain, Complex and Ambiguous (VUCA). Can Buddhism be drawn on to enhance military training in order for combatants to be more resilient, disciplined and restrained under these challenging circumstances?

Dr Sunil Kariyakarawana, Buddhist Chaplain to Her Majesty’s (British) Armed Forces, notes that “One thing that Buddhism can offer is training. Training a monk and training a soldier is not so different. Mindfulness, the precepts, all are great tools. Buddhism offers training of the character, being conscious, raising our awareness.” Both being a soldier and being a monk include living by values and rules, and both emphasise patience in enduring difficult situations and not giving way to surges of emotion.

Despite this training potential, Buddhist guidance on the conduct of armed conflict is not generally integrated into military training in Buddhist majority countries such as Sri Lanka, Thailand and Myanmar. Buddhism continues to have profound importance for many soldiers, and Buddhist clergy frequently provide them with instruction, consolation and support, preaching sermons and presiding over religious ceremonies on special occasions. Nevertheless, monastics are generally discouraged by their monastic codes from becoming involved in military matters, and these militaries are also not generally comfortable about involving religious leaders in military training. Moreover, Buddhist resources to enhance compliance with the Law of Armed conflict (LoAC), or equivalent Buddhist norms, have rarely been explored. It was with these issues in mind that the ICRC commenced a project on Buddhism and IHL in 2017 to understand how Buddhism might complement and support IHL in this respect.

The ICRC Delegation in Colombo conducts annual training sessions with the Sri Lankan security forces on the Law of Armed Conflict (LoAC) at the Defence Services Command and Staff College of Sri Lanka where the higher ranks of the Army, Navy and Air Force undergo a year-long advanced military training course. A considerable number of foreign military staff from countries around the region also undergo training at this institute.

On 16 March 2021, ICRC Delegates responsible for training of the Armed Forces included a session for more than 140 participants on the interface between Buddhism and IHL. Andrew Bartles-Smith, the ICRC’s Regional Manager for Global Affairs in Asia, introduced the ICRC’s Buddhism and IHL project, while Professor Asanga Tilakaratne, a world-renowned Buddhist scholar, emeritus professor of Buddhist Studies and founder head of the Department of Buddhist Studies at University of Colombo, presented a comparison between Buddhism and IHL. Dr Sunil Kariyakarawana followed up with a discussion about the potential practical military implications of the project. The session concluded with a panel discussion moderated by Samindika Elkaduwe, ICRC Legal Adviser, during which Prof. Asanga Tilakaratne, Mr. Prasantha Lal De Alwis and Lt. Col. Nalin Herath took questions and shared their thoughts on the project, including suggestions for military training and psychological support for combatants.

On 24 March 2021, the ICRC participated in another session on Buddhism and IHL at the week-long Advanced International Humanitarian Law (IHL) training sessions to IHL instructors of the Sri Lankan security forces in Kukuleganga. Sylvester Worthington, ICRC Networking Adviser for Global Affairs, presented the project, and in the discussion that followed Channa Jayawardena, ICRC Armed and Security Forces Programme Advisor, shared his personal perspective on being a former member of the Sri Lanka Air Force and practising Buddhist.

From a Buddhist perspective, an accumulation of karmic imprints ends up forming behaviours and reactions. This is what conditioning and training is about. Continuous training strengthens one’s own capacity to work in even the most chaotic situations, which refers both to chaotic external environments as well as the chaos in one’s own head. Mental training based on Buddhist mindfulness can help not only to reduce work fatigue among soldiers, it also creates a conducive environment for them to improve their conduct during hostilities. Discipline, self-control, patience, non-vengeance, non-harming objectives, all these factors contribute towards reducing suffering in armed conflict situations.

“As an elephant in the battlefield withstands the arrows shot from a bow, even so will I endure abuse; truly, most people are undisciplined.”
– Dhammapada v. 320

Discipline in the armed forces is often considered to be the most important attribute. Discipline helps conquer fear, maintain respect and integrity, etc. A former Sri Lankan general highlighting the importance of discipline stated that “During war soldiers face one of the highest forms of ambiguity. It is not an easy thing to remain calm in the heat of the battle.” For Buddhist monks self-discipline is crucially important, too, for example, when aiming at overcoming greed, hatred and delusion, and cultivating their opposites. Here there is much overlap with the discipline that is cultivated in the military.

Among the many tools that have been identified during the discussions thus far are: