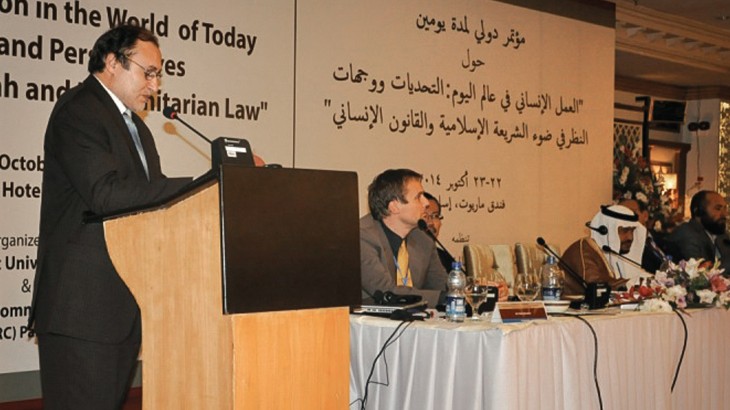 Professor Dr. Muhammad Munir is the vice-president and director-general of Shariah Academy and a professor of law at the International Islamic University. Considered an authority on international humanitarian law (IHL) and Islamic law, Prof. Munir has several national and international publications to his credit. The noted academician is also a pioneer of humanitarian law and dialogue on Islam in Pakistan.

How did you develop a special interest in IHL?

I was interested in exploring a branch of international law that had humanity at its core, and this is what led me to IHL.

What are the challenges in the implementation of IHL in Pakistan?

The most important issue is that the Government of Pakistan (GoP) has not yet incorporated the Geneva Conventions and its Protocols into its domestic law. Once this is done, the GoP will disseminate the information and humanitarian law might even be taught across many levels in academia. Right now, dissemination of IHL in Pakistan is mainly done by the ICRC.

How do you foresee the role of academia in the promotion of IHL in Pakistan?

Academia has been disseminating information about IHL in Pakistan with the support and help of the ICRC. This is why the ICRC needs to invest more in academia as they will promote humanitarian law in their institutions.

What is the potential of IHL for young law graduates?

Young graduates are the ambassadors of their institutions. Therefore, they should be equipped with adequate humanitarian law knowledge to serve the humanity.

Where do you think Pakistan lags behind in its commitment to talking about IHL?

The Geneva Conventions and its Protocols should be incorporated into our own laws and the government should ask its educational boards and universities to include IHL in the syllabus of undergraduate courses in humanities and social sciences.

Do you feel the humanitarian law is compatible with ‘Siyar’ (Islamic law of armed conflict)?

I have been researching, teaching and publishing on this area for more than 20 years and have found that there is complete harmony and compatibility between the two.