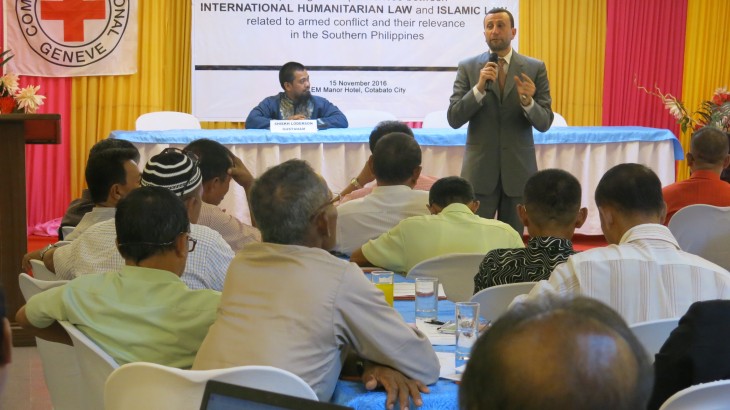 A seminar that aims to highlight the common ground between international humanitarian law (IHL) and its equivalent in Islamic tradition and jurisprudence is being held today at the University of the Philippines in Quezon City.

Titled “Exploring Correspondences between International Humanitarian Law and Islamic Law Related to Armed Conflict and Their Relevance in the Southern Philippines,” the seminar, organized by the National Commission on Muslim Filipinos, the UP-Institute of Islamic Studies, and the ICRC, aims to deepen dialogue among Islamic institutions and the ICRC for the common purpose of preserving the life and dignity of victims of armed violence.

“Many rules and customs to protect life and dignity in times of war have been codified in IHL. The Geneva Conventions—the main instruments of IHL—are universally accepted by all States, but many arms carriers and civilians lack knowledge of these legal rules, and feel more bound by their traditional values and religious beliefs,” said Andrew Bartles-Smith, ICRC regional advisor for humanitarian affairs.

“The discussions we’ve held recently in Mindanao and today in Manila aim to promote understanding and knowledge of the rules of armed conflict, and to highlight correspondences between modern humanitarian law and Islam,” he added.

All four seminars—three of which were successfully held in Zamboanga, Marawi, and Cotabato cities—include panel discussions on IHL and Islamic law related to armed conflict and challenges related to the observance of these rules, and how to improve respect for them.

The ICRC has reached out to Muslim scholars and dignitaries since the late 1990s to search for common ground between IHL and its equivalent in Islam. It stepped up its engagement with Islamic scholars and organizations in Southeast Asia in 2010.

“This dialogue has helped to overcome misperceptions and to enhance understanding of each other’s perspectives. It has resulted in the integration of the perspectives of scholars and communities in assisting and protecting the vulnerable, and better access to conflict-affected areas and populations,” said Dr. Ahmed Al-Dawoody, ICRC’s legal adviser for Islamic law and jurisprudence, and a leading expert on the subject.