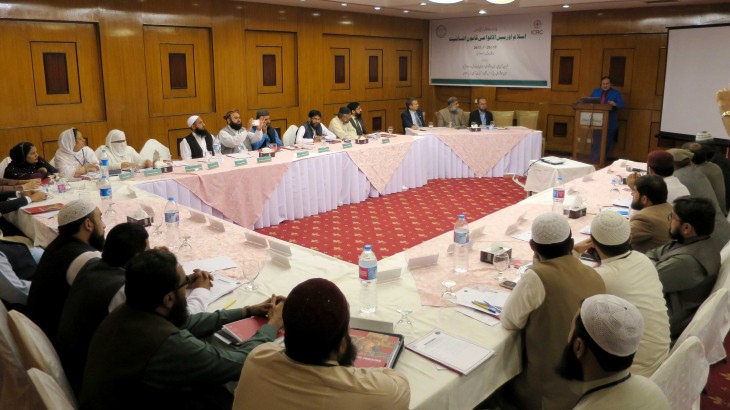 Over 30 Islamic scholars and professors of Islamic studies from Pakistan, Bangladesh, Afghanistan and Iran gathered in Islamabad for discussions on commonalities between the Islamic law and international humanitarian law (IHL). The deliberations were organized by the International Committee of the Red Cross (ICRC) as part of a regional course titled Regional Training Course on Islam and IHL for University Professors from 17 to 20 October, 2017.

The discussions were intense and stimulating, and focused on ways to increase respect and compliance with both the bodies of law.

Prof. Abdul Razaq from Government Postgraduate College, Quetta, asked, “Why do we still see horrific killings and destruction of civilian life and property when all religions, including Islam, and contemporary laws prohibit them?”

The discussions ranged from basic rules of engagement and ethics of war to protection of civilians and enforcement mechanisms available under Islamic law and IHL. The participants deliberated over the strategies to promote comparative learning of Islamic law and IHL in Islamic seminaries and Islamic studies faculties of universities so that the discourse could get traction at all levels.

The regional training course, organized in Urdu, provides an opportunity to Islamic scholars from the region to build cross-border networks. It’s also a forum to develop a common narrative promoting respect and dignity of people affected by conflict and violence.

Dr Shams Ur Rehman Azhari, from Dawah University Kabul, lamented on the lack of respect for rules of war which have inflicted wounds that might not heal for generations to come. “Though we cannot stop wars, we can use our platform – be it the university, a seminary classroom or mosque – to draw a parallel between Islamic teachings and international laws since both strive to uphold human dignity,” he said.

Participants were of the opinion that since Islam is often misrepresented in the world, regional courses like these would open doors to Islam as a source of customary law and humanitarian practice. As an outcome of the course, many scholars from faculties of Islamic studies in different Pakistani universities have vowed to present proposals for the integration of comparative learning of IHL and Islamic law of war in their curricula. The ICRC will provide required academic support to this endeavour.

The ICRC has been organizing the regional course on Islam and IHL since 2015 and plans to continue holding these discussions.