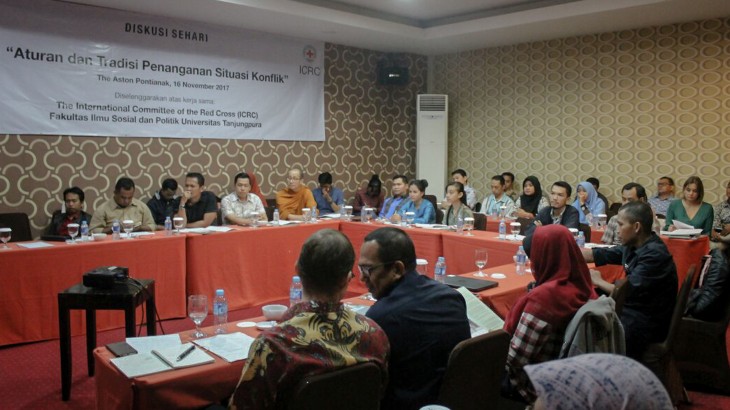 Almost two decades on from an outbreak of communal violence, the ICRC and Tanjungpura University (UNTAN) held a seminar in the Indonesian province of West Kalimantan, to explore the linkages between International Humanitarian Law, (IHL), religious principles and local customs and traditions, known in Indonesian as “adat”.

The one-day seminar held in the provincial capital Pontianak brought together a range of experts who reflected the diverse nature of the province’s multi-ethic make up. The region is home to Chinese, Malays, Dayaks, Madurese and other ethnic populations. In 1999, Western Kalimantan was the scene of widespread communal violence. Throughout the late 1990s early 2000s, the ICRC was on the ground with the Indonesian Red Cross (PMI) to assist all those affected and displaced by the violence in the province.

“This seminar was a good opportunity to learn from all those affected by the past conflict and to engage with a new generation who may not be familiar with the work of the ICRC and IHL,” said ICRC delegate Jessica Sallabank. “In a post-conflict environment, it’s important to learn lessons from the past, understand the current dynamics and strengthen networks with local actors from all communities.”

The Pontianak seminar brought together Islamic scholars, a Christian priest, a Buddhist monk and expert representatives from the Dayak, Malay, and Madurese communities, who all of whom gave their own perspectives on humanitarian principles and behavior in conflict. “There are often many interesting parallels between IHL, religious teachings and even local traditions. This is an area we are very interested in exploring further,” said ICRC legal advisor Rina Rusman. “Local traditions can play a critical role in shaping the nature of the conduct of hostilities as well as finding ways to minimize fighting and pave the way for long term solutions.”

Amongst the points raised in the presentations included the importance of the main ethical precepts in Buddhism (the first of which states “Avoid killing, or harming any living thing.”) and the correlation between Islamic Law (Fiqh) and IHL, an area that the ICRC has been exploring for a number of years both in Indonesia and around the world.

Dr. Kristianus, a leading expert on Dayak culture and Dr. Abdul Latif Bustami, a leading academic from the Madurese community also offered their own unique perspectives on conflict, with discussions ranging from the use of the traditional weapons such as swords and sickles, the historical tradition of head-hunting, when and how to attack the enemy, and wider ethical discussions about what constitutes a ‘fair fight’ in the context of local traditions and culture.

The final panel brought together leading figures from the local media and civil society sector who reiterated the dangers of public misperceptions, negative stereotyping, and the more recent phenomenon of land-grabbing as factors which still fuel tensions with Kalimantan’s communities.

“Even though IHL is new to many of us, the concept itself if not that new, it’s within us already” said Dr. Donatianus, Vice Dean II at the Faculty of Social and Political Science, University of Tanjungpura. “It’s important to help people equally, treat people the same, regardless of the community they from.” Co-organizer Dr. Syarifah Ema Rahmaniah, head of UNTAN’s Sociology department expressed her appreciation for the support of the ICRC in bringing together members of the different communities, saying “We all want to live together in peace and we don’t want a repeat of the past.”