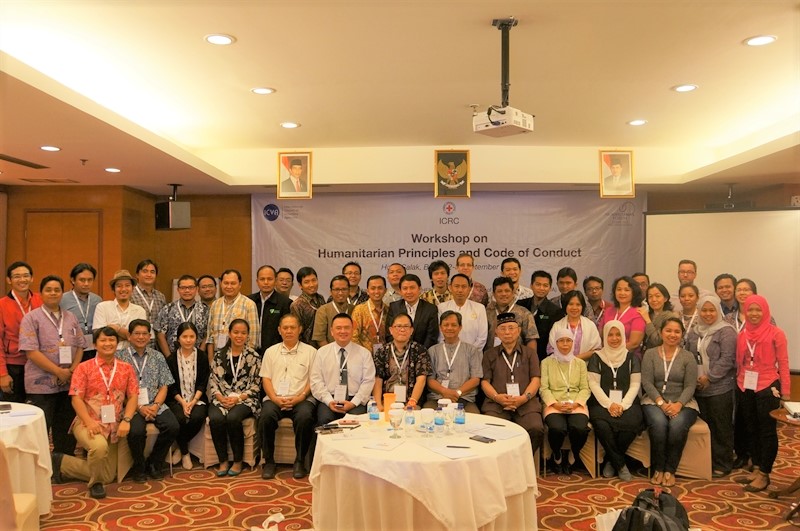 On 2-3 September 2015, the ICRC in collaboration with the International Council of Voluntary Agencies (ICVA) and Humanitarian Forum Indonesia (HFI) conducted two day workshop on Humanitarian Principles and Code of Conduct at the Salak Hotel, Bogor, West Java. The workshop was attended by no less than 54 representatives from diverse faith-based and non-religious humanitarian organizations, including high-level representatives. High quality presentations by the principle speakers generated lively and fruitful discussions which made the event a resounding success.

The ICRC and ICVA have already collaborated on similar humanitarian affairs workshops in London, Sana’a, Amman and Dakar with support from the HFI, the Muslim Charities Forum and Islamic Relief. This was the second time that the ICRC has arranged such an event in Indonesia, following on from a more modest one-day event organized in collaboration with Dompet Dhuafa, HFI and ICVA in November last year.

The aims of the workshop were as follows:

The event provided a window on the richness of the humanitarian landscape in Indonesia. While most organisations had internalized many of the working modalities and approaches familiar to humanitarian workers worldwide, a number of faith-based organisations provided new concepts, fresh perspectives and innovations. Many of these organisations have already started to deploy abroad, as far as the Middle East and Africa. Dompet Dhuafa and Muhammadiyah had deployed via HFI for the Nepal earthquake, for example, and Mer-C had constructed a large hospital in Gaza with funds from the Indonesian government.

Many participants had direct experience of working in conflict situations, both as humanitarian workers and leaders of various interfaith peace-making initiatives in Maluku, Sulawesi, Aceh and Kalimantan.

The increasing importance of local/national and faith-based organisations was touched upon early on, not least because in contexts like Indonesia they had begun to overall more traditional INGOs. HFI Chairman Toni Hendrajati pointed out that, whereas most funding/assistance had come from abroad in the years of the Aceh Tsunami response, it now came from inside Indonesia. This tied into the issue of increased government assertiveness and nationalization of disaster response, to the extent that traditional INGOs were having to nationalize their own operations by hiring more local staff and/or working through local partners, a development which many INGOs regarding with anxiety.

Hilman Latief described how modern faith-based humanitarianism had only really taken off in the past 10-20 years, due both a religious revival and expansion of the middle class in many parts of the world-Indonesia’s being one of the fastest growing- which increasingly sought to reassert its religious identity, including fulfillment of its charitable obligations. The expansion of Islamic charities paralleled the expansion of Islamic banking, insurance services and fashions etc. Titi from OCHA pointed out the paradox that, while these developments had led to an exponential expansion in charitable giving, the hardening of religious identities had also contributed to the increased intolerance and sectarian tensions which hampered humanitarian action.

The fundamental role of religious values and obligations in charity and humanitarian work was the focus of a fascinating debate on how religious principles are translated into humanitarian action and underpinned the work of even non-religious organisations which emerged from the same milieux, including the Red Cross itself. Unifying conceptions that all mankind is created in the image of God underpinned the concept of humanity so central to the work of all organisations. Like Judaism, Christianity and Islam, however, humanitarian organisations tended to focus exclusively on humanity to the exclusion of other living beings, whereas Buddhism, Hinduism and animist religions often had broader conceptions which encompassed and protected the entire natural world- perhaps more suited to the needs of the present, since neglect of the environment will ultimately destroy us all.

Concepts in Islam such as brotherhood (Ukhuwwah), solidarity and mutual help (Taawun), justice (al-’adalah), together with Zakat and Shadaqah donations corresponded to similar conceptions of welfare and the common good in Christianity, Buddhism and other religions. Exhortations for the rich to help the poor and marginalized- to love thy neighbor, the Parable of the Good Samaritan, for example- existed in all traditions, and religious adherents had social religious obligations which were often an essential part of individual piety.

The concept of justice was also a key motivation for humanitarian work- driving transformative efforts to alleviate poverty, reduce economic inequality and social disparity and foster social change, which also involved a degree of advocacy- Liberation Theology in the Catholic world for example. Concepts of the community of the faithful- the Ummah in Islam, Christendom etc. motivated adherents to support their co-religionists, but could also challenge the principle of impartiality. While faith-based humanitarian organisations understood this, their donors and communities often did not- just one example of the frequent information gap between givers, deliverers and recipients.

Organisations like Dompet Dhuafa and Muhammadiyah, drawing on vast religious networks, manpower and a deep pool of funding, including zakat contributions from millions of Indonesian Muslims, were only starting to realise their potential. Meanwhile, UN funding, for the refugee crisis in Syria, for example, was drying up. Strain on resources for disaster relief meant that the need for sharing and cooperation was greater than ever- since each organization had strengths and weaknesses to complement others. Some organisations possessed greater manpower, or large pools of volunteers, others particular expertise or access to funding, for example. Religious organisations with networks of mosques, temples and churches rival some governments and can draw on adherents from all walks of life who are committed to help others as part of their religious obligations.

The coordinated Indonesian response to the Nepal earthquake, through umbrella bodies such as the HFI, had showcased how diverse Indonesian organisations did not merely collaborate domestically, but were increasing deploying abroad. Meanwhile, they already helped to bridge each other to their respective religious communities- Christian organisations to Muslim communities by Muslim organisations, and vica versa. Interfaith dialogue continued to have an important role in various sectarian hotspots.

Faith based organisations were nevertheless subjected to particular pressures, encouraged by donors to assist only coreligionists, for example, or were refused access or permission to help by local communities with different religious beliefs. Post 9/11, Muslim charities had come under additional pressure, some being accused of supporting terrorism.

Sometimes help was refused not because of ethnic or religious considerations, but simply because communities wanted help from one particular organization- a familiar or reliable brand which they perceived as more expert or better resourced.

While faith-based organisations have drawn on the expertise and experience of long-standing organisations such as the ICRC, RCRC movement and UN family, and many have internalized the principles of impartiality and neutrality, together with best practice such as needs assessments and involvement of local communities, INGOs were themselves reaching out to faith-based organisations, drawing upon their local expertise, acceptance and networks of churches, mosques and adherents/volunteers, leading to convergence between the two.

Though each organization had its own mission statement/ mandate, principles and code of conduct, many principles and best practices were shared, and initiatives such as the Code of Conduct for the RCRC Movement and NGOs, one of the first steps in the professionalization of the aid industry, had been signed by many of the world’s most respected NGOs from diverse cultural and religious backgrounds. Even so, though 587 organisations had signed the Code of Conduct globally, there were now an estimated 384,000 NGOs in Southeast Asia alone, with new initiatives- many crowdsourced- cropping up all the time, in response to the migrant crisis for example.

All organisations have constantly to re-assess whether their principles and codes of conduct are fit for purpose as the humanitarian environment evolves. Some religious organisations, for example, thought that the Code of Conduct was not relevant for them, since they combined aid with proselytizing activities, while others such as World vision and Islamic Relief had adopted or adapted it wholeheartedly, running highly sophisticated and professional operations.

The Code also had to be understood and accepted by donors and local communities who often lacked awareness of its basic principles and hampered humanitarian work. Thus, an effort should perhaps be made to translate it into simple language which can easily be understood at the grassroots level.

A number of organisations asked how they could sign on (answer: by simply registering online using the RC website). Others said that while it was the responsibility of each signatory to enforce the Code themselves, it would be better if there was an enforcement mechanism, though ICVA pointed out that violators of the Code could be reported and perhaps encouraged to remove their names if violations persisted. Some organisations, ICVA and ADRA for example, insisted that all staff members sign the Code as a condition of working for the organization.

The presentations of Buddha Tzu Chi, Dompet Dhuafa, PGI and KARINA were particularly impressive, providing a fresh perspective on humanitarian action, including approaches and principles which had the potential to enrich the humanitarian spirit and work of other organisations, not least the ICRC. Buddha Tzu Chi’s concept of Gratitude- systematically and humbly thanking the beneficiaries for the opportunity to help them- together with its strong volunteer ethic (including rigorous training and assessment and a one year waiting list for even highly qualified doctors to volunteer at their own expense) were remarkable.