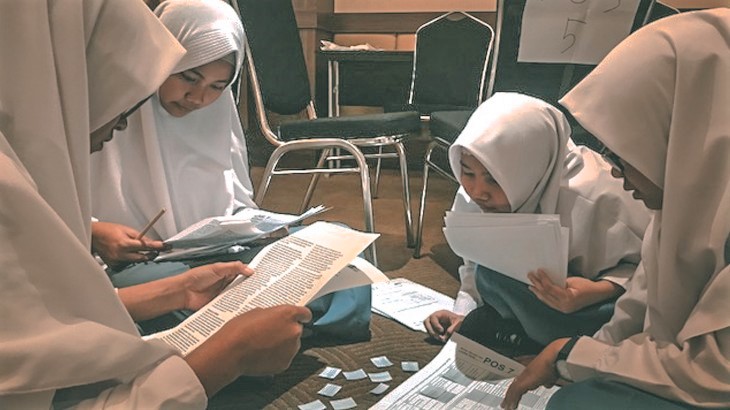 For high school students fortunate enough to live in peaceful societies, the realities of life in a war zone can be difficult to imagine. In Indonesia, the world’s largest Muslim-majority country, armed conflict is something that many teenagers associate with other countries or with times gone by. But now, an ICRC-supported teacher training programme is aiming to bring the reality of the front line into classrooms.

In 2012, the International Committee of the Red Cross rolled out the Akhlak Kemanusiaan module to create awareness about humanitarian ethics among high school students aged between 15 and 18. Adapted from the Exploring Humanitarian Law programme, the course provides a basic introduction to international humanitarian law and core humanitarian principles such as humanity, neutrality, impartiality and independence.

In mid-July 2018, the ICRC, in collaboration with staff from Yogyakarta-based Ahmad Dahlan University, organized a three-day training course for local civic education teachers hoping to introduce the Akhlak Kemanusiaan programme to their students.

Working through a combination of case studies, photos collages and role plays, the teachers were trained on how to convey the real-life dilemmas faced by those affected by conflict and disaster. A number of volunteers from the Yogyakarta branch of the Indonesian Red Cross, Korps Sukarela, also shared their experiences of humanitarian response.

“Through the five modules, our aim is to train teachers so they can help their students empathize with people affected by conflict and think more deeply about the humanitarian aspects of war and disaster,” said Freddy Nggadas, the ICRC Movement cooperation officer. “Through the role plays, they can become soldiers, wounded civilians, bystanders, detainees or even humanitarian workers. The teachers’ role is to make them think about the ethical decisions they would make. Sometimes, there is no easy answer.”

On the final day of the training, the teachers were joined by 22 students from a nearby Muhammadiyah girl’s high school who volunteered to take part in some of the practice lessons. “This is the first time I have ever done anything like this,” said 16-year-old Rizki. “I had never heard of international humanitarian law but I have enjoyed the role plays.  Even though Indonesia is peaceful, it’s important to think about other people who are suffering and to think about what war is like.” 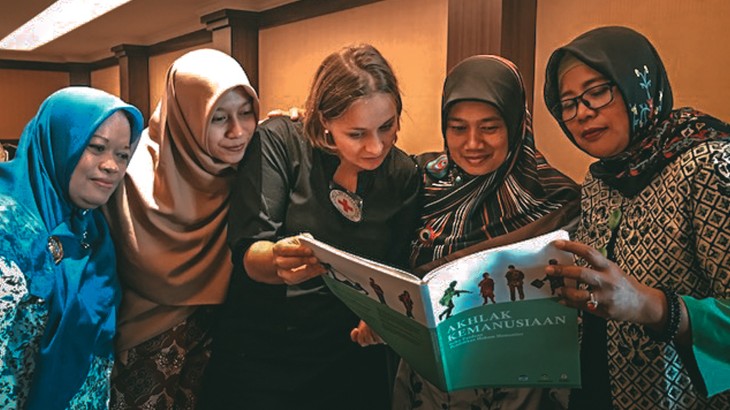 “Although many scenarios are centred around situations of conflict, this is not just a course about war,” explained ICRC’s Jessica Sallabank, deputy regional adviser for humanitarian affairs. “The Akhlak Kemanusiaan module is about the importance of upholding humanitarian principles and protecting human dignity, in both war and peacetime.”

High school teacher Mrs Warsanti Mediyaningsih said the course provided the teachers with a good introduction to the basic principles of humanitarian law. “The course teaches students that human dignity cannot be compromised, not even during war,” she said. “They also learnt that it is important to protect people’s rights especially during conflict.”

In his opening speech, Dr H Muchlas, Rector 1 at Ahmad Dahlan University, thanked the ICRC for their support in developing the humanitarian ethics programme and said that along with rituals (ibadah), creed (akidah) and rules on worldly matters (muamalah dunyawi), ethics or a sound moral code (akhlak) was one of the four key principles of the Islamic faith. He also said Muhammadiyah remained “committed to upholding the universal human ethic and values of humanity” notably through the work of the Muhammadiyah Disaster Management Center, the disaster relief arm of the organization.