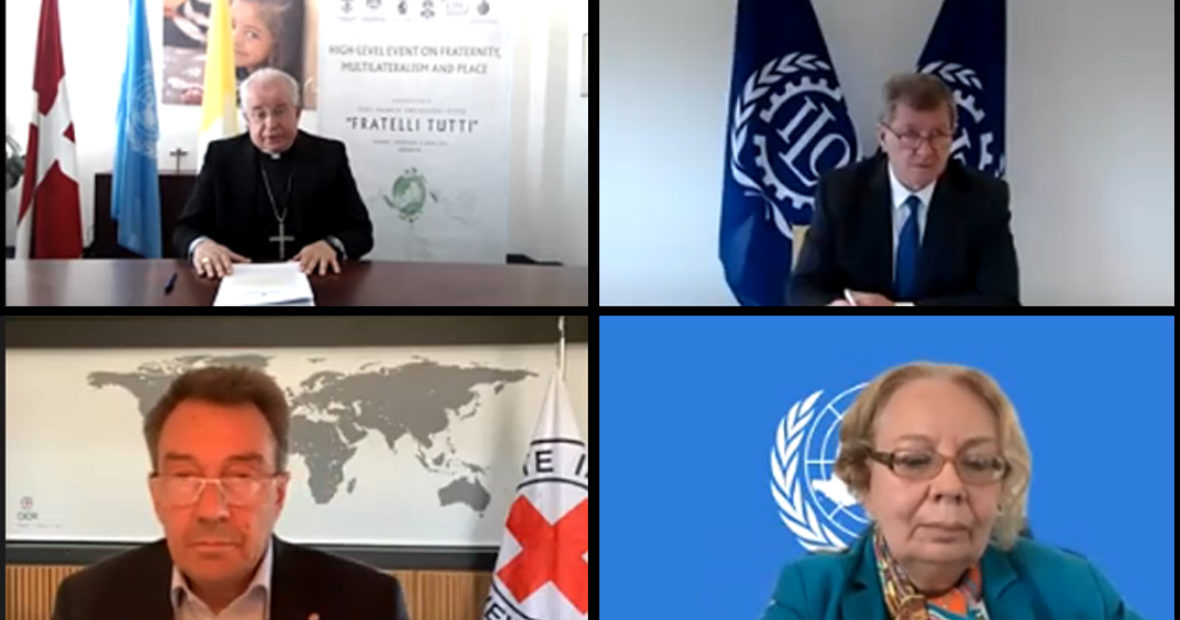 On 15 April 2021, the Holy See organised a high-level event on “Fraternity, Multilateralism and Peace”. It was the occasion for the Holy See (often referred to as the Vatican) and leaders of international organisations based in Geneva, including the United Nations High Commissioner for Refugees, the International Labour Organization and the World Health Organization, to exchange statements that focused on solidarity and shared global humanity reflected by “fratelli tutti” (“all brothers”). This concept of fratelli tutti was also an inspiration for the co-founder of the Red Cross Henry Dunant.

Archbishop Ivan Jurkovič opened the proceedings, followed by Cardinal Pietro Parolin who underlined the importance of multilateral engagement and the Pope’s support to global humanity. He outlined the concept of fratelli tutti in its various facets, for example, with regard to the international community’s obligation to make vaccines accessible to all, including refugees and migrants, during the current COVID-19 crisis.

The ICRC was represented by President Peter Maurer, who in his speech drew on the history of humanitarianism and the organisation to underline that neutral independent humanitarian action was a way to support the most needy and vulnerable. “For centuries, societies have recognized that there must be limits to violence not least because of the lasting divisions it causes and that it prevents reconciliation. The principles of International Humanitarian Law are rooted in the world’s religious traditions, and the role of religious leaders and institutions in promoting common humanitarian principles is crucial.”

“Brotherhood and sisterhood are at the basis of humanitarianism, which transcends cultures, religions, time and space. There is no distinction made between friendly or enemy wounded soldiers. In arguing for neutrality and impartiality, the founders of the ICRC, who themselves held deeply rooted religious views in private, knew only too well that humanitarian action needed to be delivered ‘without distinction as to nationality, race, religious beliefs, class or political opinions.'”

In closing, President Maurer added: “Whether we pass the test of humanity says much about the world we are building – whether divisions are entrenched, whether cycles of violence and suffering continue… or whether even when faced with deep divisions, the line of our common humanity can be defended.”