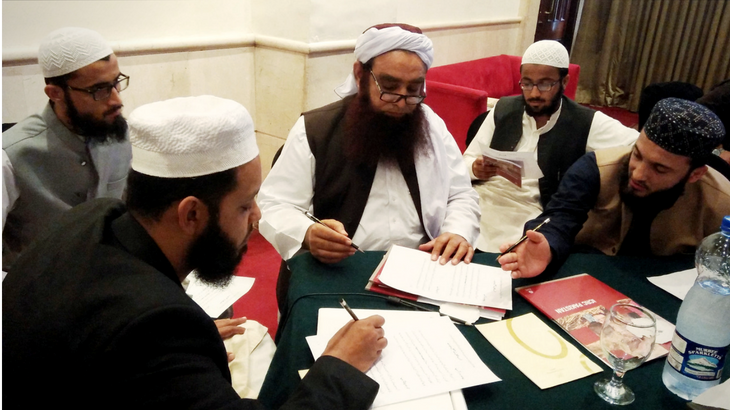 The relationship between Islamic law and IHL is a unique avenue for strengthening understanding and encouraging debate on humanitarian principles and humanitarian issues, in light of Islamic principles. Apart from many other activities on this subject, in 2011, the ICRC delegation in Pakistan initiated the Islam and IHL training programme, engaging religious scholars, particularly Islamic studies professors, to highlight the compatibility of IHL rules with the Islamic law of Siyar. After the success of the programme in Pakistan, it was taken to the South Asia region in 2015, engaging with Islamic studies professors and Islamic scholars from Afghanistan, Bangladesh, India and Iran.

A major aim of these training sessions is to integrate Islamic law of Siyar and elements of IHL into the curricula of Islamic studies to pave way for enhanced research on the topic and an understanding of the Islamic law of war. So far, the ICRC has held two international conferences on Islam and IHL, in 2004 and 2014, and five training courses for the Islamic studies professors and teachers of the religious seminaries.

A major milestone has been the integration of Islam with IHL as part of the syllabus for Bachelors of Science in Islamic studies. The course outline has been designed and recommended by a committee of the Higher Education Commission headed by Dr Merajul Islam Zia, director of the Institute of Islamic Studies, Peshawar University. This course can be adopted after the internal approval of the concerned university. Bannu University has introduced a similar course in its MPhil degree under the chairmanship of Dr Hussain Ahmad, who is an alumnus of the ICRC training courses. Dr Abdul Quddus, another alumnus of the training programme, introduced the course in the Islamic Studies department at Bahauddin Zakariyya University, Multan.