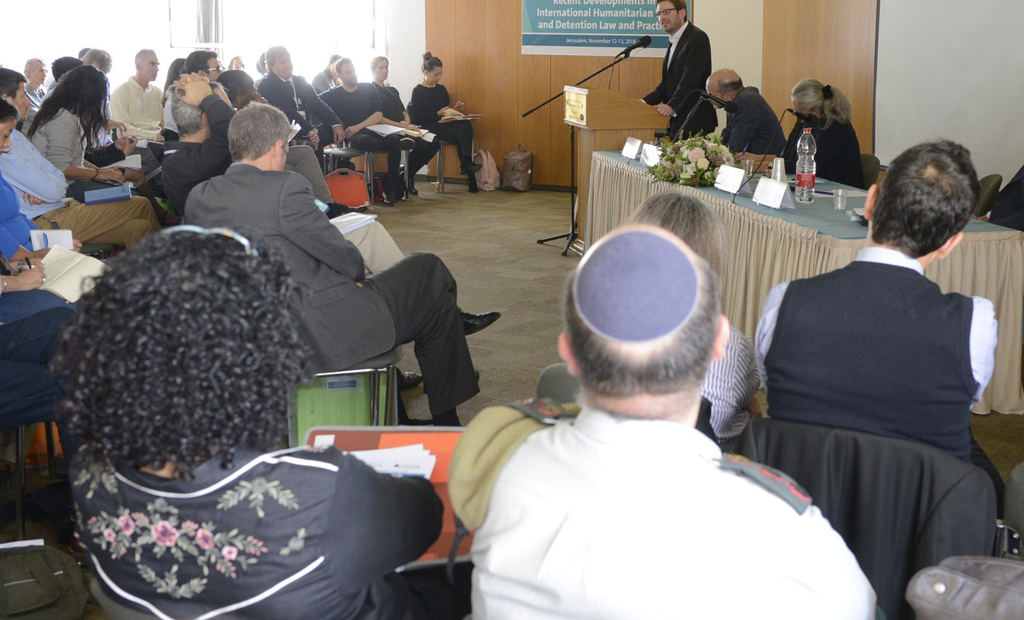 Introduction:
The Minerva Center for Human Rights at the Hebrew University of Jerusalem and the Delegation of the International Committee of the Red Cross (ICRC) in Israel and the Occupied Territories are organizing an international conference that seeks to evaluate recent developments in the law and practice related to military justice and, in particular, the degree to which such developments interact with international norms applicable to armed conflicts.
The conference, the 14th in the series of Minerva/ICRC annual international conferences on IHL, will take place on 11-12 November 2019 in Jerusalem. This call for papers invites proposals to present a paper at the conference. Authors of selected proposals may be offered full or partial flight and accommodation expenses.
Submission deadline: 1 June 2019

Background:
Despite the quip that “Military justice is to justice what military music is to music” (attributed to Georges Clemenceau), military justice continues to play a key role in the enforcement of the law of armed conflict, as a method to uphold army discipline (which includes observance of International Humanitarian Law (IHL)), and, in situations of conflict, upheaval and occupation, as a tool of governance, regulated and even mandated by IHL. Significantly, IHL norms provide several normative benchmarks for evaluating military justice, including the fundamental procedural safeguards introduced in article 75 of the First Additional Protocol and article 6 of the Second Additional Protocol for individuals detained, tried and sentenced for actions related to the armed conflict, norms relating to the duty to investigate and prosecute grave breaches and other serious violations, and the provisions of the Third and Fourth Geneva Convention relating to security internment, trials of prisoners of war and other persons held in internment, and penal prosecutions in occupied territories.

Still, there is a growing discourse around the independence and impartiality of military courts, and the compatibility of their exercise of power in certain situations with international human rights law and international criminal standards. Questions of this nature have been raised, in particular, about the practice of trying civilians, including minors, before military courts in times of conflict and emergency, problems associated with the possibility of extending military investigations and prosecutions to senior officers, high in the chain of command (including, civilian superiors), the applicability of international safeguards to legal proceedings resorted to by non-state actors, and the practice of establishing ad hoc adjudicative institutions to try military crimes with rules of evidence and procedure that deviate from those applicable in other military courts. Specific attention has been given in recent years to the operation of the US Special Commissions for trying terrorist suspects, the involvement of the Israeli military courts in the West Bank in certain high profile cases, the use of military courts to try civilians in several countries – including, for example, Turkey, Egypt and Pakistan, and the operation of military justice in relation to the conduct of foreign troops in Iraq and Afghanistan.

At the source of many of these questions one can identify tensions between military hierarchy and judicial independence, between judges and lawyers ‘in uniform’ and judicial impartiality, between executive control over the system of military courts and separation of powers and between the operational expediency represented by military justice and the constant push for higher due process standards in society in general. While such tensions always challenged military justice, new and controversial modalities of its application, and the growing influence of international human rights law and international criminal law on IHL, invite a new consideration of the legal and policy issues relating to the operation of military justice institutions and processes.

The conference organizers invite proposals to present a paper dealing with one or more of the following issues:

• The use of military courts to try civilians, both generally and minors, in particular

• The use of secret evidence in military courts

• The accountability of military courts and their agents under international law

The committee also welcomes additional proposals on other relevant and contemporary issues relating to the topic of the conference.

Submissions:
Researchers interested in addressing these and other issues are invited to respond to this call for papers with a proposal of up to 750 words for an article and presentation, along with a brief CV. Proposals should be submitted at: http://gss.huji.ac.il,no later than 1 June 2019.

Note that in order to apply, applicants must first create an account on the website. Once the account has been created, the “14th Annual Minerva/ICRC Conference” can be found under “General Applications”. For questions regarding the application process, please contact: mchr@savion.huji.ac.il
Applicants should expect notification of the committee’s decision by 30 June 2019. Written drafts of approx. 10-25 pages, based on the selected proposals, will be expected by 15 October 2019.